(1)
EN.DELFI
aA
With Vilnius Airport closing for a month due to reconstruction, Kaunas will be the location of the country’s main airport. This is the first case in Europe where traffic from a larger airport is transferred to a larger one. 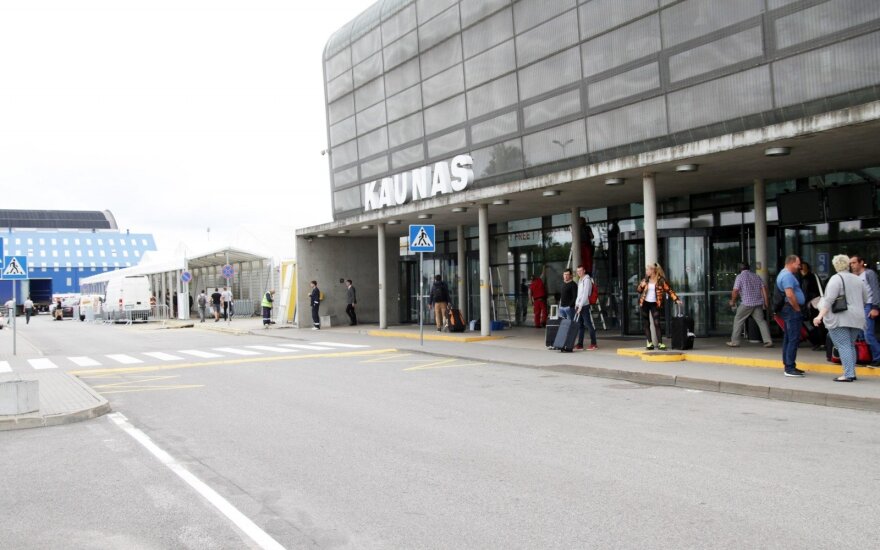 The Vilnius Airport runway will be under reconstruction up to August 17. Its old coating will be replaced, its foundation reinforced, new drainage and rain collection systems will be constructed and light control systems will be improved.

The Ministry of Transport and Communications says that the works are necessary to ensure flight security. The runway was last repaired fourteen years ago and research three years ago revealed that its condition was deteriorating.

Following the reconstruction the runway should operate without major investment for the coming 25 years. This reconstruction will cost 25 million euro.

While works proceed, 14 of 16 regular flight airlines plan to fly to and from Kaunas.

The Kaunas Airport will also have far more staff for the next 35 days, in addition to the increased number of passengers.

"From today to August 17, more than 400 aviation security and ground handling employees, as well as other specialists, will move their working place to Kaunas Airport. Another 200 temporary employees will help effectively manage the increased passenger flows, Lietuvos Oro Uostai administration volunteers, who have agreed to work in Kaunas for 35 days will be prepared to answer passengers' queries," states Lietuvos Oro Uostai executive director Donatas Voveris.

The director urges passengers to not forget to carefully consider how much time it will take them to reach the airport. Passengers are advised to arrive with no less than two hours prior to their flight and upon arriving to monitor information on the screens and query airport staff with any questions.

While for many Lithuanians living in small towns or Klaipėda and Šiauliai it will be easier to reach the airport due to the smaller distance, citizens from the capital and guests will be faced with inconvenience. During the reconstruction passengers will be taken to Kaunas Airport nine times a day from Vilnius Bus Station by the company Toks, also passengers will be shuttled every 30 minutes by Ollex express busses, whose schedules are coordinated with flight schedules.

This one way trip will cost around 10 euro. It is also worth noting that the trip will take around an hour and a half, thus time should be planned ahead. Those travelling to the airport from Klaipėda can also make use of the services of Ollex, it will be shuttling passengers every day, with schedules also coordinated with flight times.

Those travelling to Kaunas city centre, it will be possible to reach it with the route 29 busses which will travel every half an hour. Those in more of a rush to reach the airport can opt for the special route 29E bus, which should reach the airport faster; this route is temporary and will be discontinued after the Vilnius Airport runway reconstruction ends. Tickets to travel by these routes are sold on-board the buses at a price of 0.80 euro each.

Those wishing to stay overnight next to Kaunas Airport will be able to do so at the hotel AirHotel, which has room for 106 people, with 53 rooms. An overnight stay at the hotel costs around 39 euro.

Over the next 35 days the Vilnius Airport runway is to be reconstructed. While the timing for this has drawn much ire, when people plan holidays specifically for summer and travel by airplane become particularly pertinent, D. Voveris states this is the best option. "The decision was made based on weather patterns for the past five years, that is when historically there was less rainfall in Lithuania and the highest temperatures because during reconstruction work, the runway's coating will be removed, its foundation reinforced and then new coating will be applied. In essence it is just like asphalting, just that the coating is made thicker. This asphalting is best done and lasts best when the weather temperature is high and there is no rainfall," he said.

D. Voveris also noted that it would not be worthwhile to conduct the reconstruction in stages because the runway is rather short – 2.5 km and there was no need for a new parallel runway which, furthermore, would be particularly expensive.

"The runway is being fundamentally reconstructed, not just capital repairs, but reconstruction where rain drainage is being repaired, the whole lighting system is being reworked. There are no means to conduct this type of reconstruction without a total halt to an airport's activities. If it was significantly longer then yes, the reconstruction could be done in segments, but that would last several years. This is one argument. Another is that the airport's function would repeatedly be limited over those years," he commented.

The Vilnius Airport is also proceeding with terminal territory renovation works. With the reconstruction plan concluded, already next year cars and busses should drop off passengers at a newly built transport hub further from the terminal and the entry to the airport's territory will also be controlled. Furthermore there are plans for new car parking locations in the airport's territory.

Kaunas Airport is coping with increased traffic as most flights are being diverted from Vilnius to...