EN.DELFI
aA
Webpage of one of the most prestigious scientific journals in the world, Nature, recently published an article “A Single-cell Atlas of the Airway Epithelium Reveals the CFTR-rich Pulmonary Ionocyte”. It centres around the discovery of a new type of cell – pulmonary ionocyte. Dr. Lindsey Plasschaert and Vilnius University (VU) Life Sciences Centre doctorate student Rapolas Žilionis are first authors on this paper. 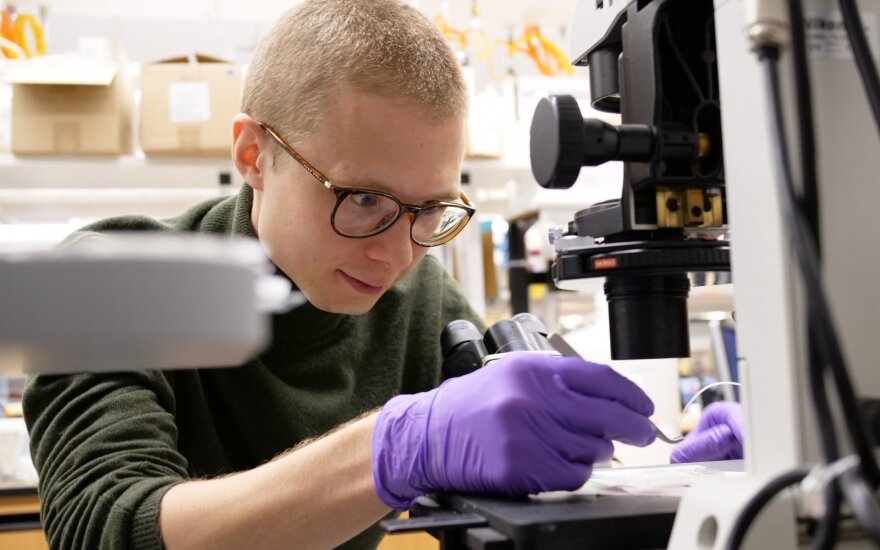 R. Žilionis came back to Lithuania after a three-year internship at Dr. Allon Klein laboratory in Harvard Medical School. The young scientist says, that his excitement started growing after he went through various scientific works and realised that no-one have ever described and experimentally proved the existence of this new cell type. The discovery is important not only because it will provide a better understanding of airflow biology, but also because it will help scientists who research cystic fibrosis – an incurable genetic disease, the Vilnius University reported in a press report.

Related articles
90 our of 100 universities in the world request Lithuanian lasers  (1)
Over 22,000 applicants invited to study in Lithuania's universities

“Why were pulmonary ionocytes discovered only now? One of the main reasons is that up until 2015 we could not efficiently perform single-cell RNA sequencing. However, now we are able to measure which genes are active in each cell that forms a tissue. Gene activity defines a cell’s function¬ and allows us to sort and catalogue all the cells in the sample. We started researching the airway epithelium to better understand the constitution of this tissue and to create a comprehensive catalogue of various cell types in it. The theoretical possibility of discovery of a new cell type always existed, but we did not anticipate it”, R. Žilionis said.

He stressed that the cooperation between Dr. Allon Klein laboratory and dr. Aron Jaffe’s laboratory in Novartis Institutes for BioMedical Research was fundamental for this discovery.

“Members of Dr. A. Jaffe’s team are proficient in airway epithelium biology, and some of the best experts of single-cell RNA sequencing work in Dr. A. Klein’s laboratory. Klein’s laboratory is exceptional in that the scientists who work there are able to generate, analyse, and interpret the data provided by single-cell RNA sequencing – that is exactly what I did when researching the airway epithelium”, R. Žilionis said, explaining his input into the discovery.

When the scientists noticed a new type of cell in the data, they started figuring out what its function might be.

“Between the cell’s genes we found the gene that causes cystic fibrosis, known as CFTR. Cystic fibrosis occurs when this gene has mutated. It was well known, that CFTR gene defects were connected with cystic fibrosis, but it was not clear which cells actually hold the active gene. Dr. Lindsey Plasschaert conducted further experiments that showed that pulmonary ionocytes hold the CFTR gene. Pulmonary ionocytes make up just 1-2% of the airway cells”, VU student explained.

Today single-cell RNA sequencing is widely available, but at the start of R. Žilionis’ internship, Dr. A. Klein’s laboratory was one of the very few places that used it. In 2015 Dr. A. Klein created this method and published an article about it in “Cell” journal together with another scientist from VU Life Sciences Centre, Dr. Linas Mažutis.

A similar finding of ionocytes in airway epithelium was reported by scientists at the Broad Institute and Massachusetts General Hospital, in the same journal on the same day. Both articles will be published in the same issue of “Nature”. This, according to R. Žilionis, only proves the significance of the discovery.

This is already a second “Nature” publication for R. Žilionis. Last year he was one of the co-authors if an article published in “Science”. R. Žilionis has also published articles in “Nature Protocols”, “Nature Immunology”, and others.

One of the things Lithuania is best known for is the laser industry. While perhaps not at the very...

Over 22,000 applicants invited to study in Lithuania's universities

Over 22,000 applicants have been invited to study in Lithuania's universities and colleges, including...

Life changing technologies will be presented in Vilnius

On 26-27 September in Vilnius over 60 companies from all over the world will showcase their products...

Lithuania aims to become the most attractive country in Europe for development of life science...