EN.DELFI
aA
As early as this spring Vilnius city dwellers and guests will be offered to take advantage of the service of electric scooter-sharing service and to travel in the city in an innovative and convenient manner. Striving to become the capital of scooters in Europe Vilnius will not only reduce congestions but will also become a free area of scooters and other alternative means of urban transport, a press release from Vilnius City Municipality states. 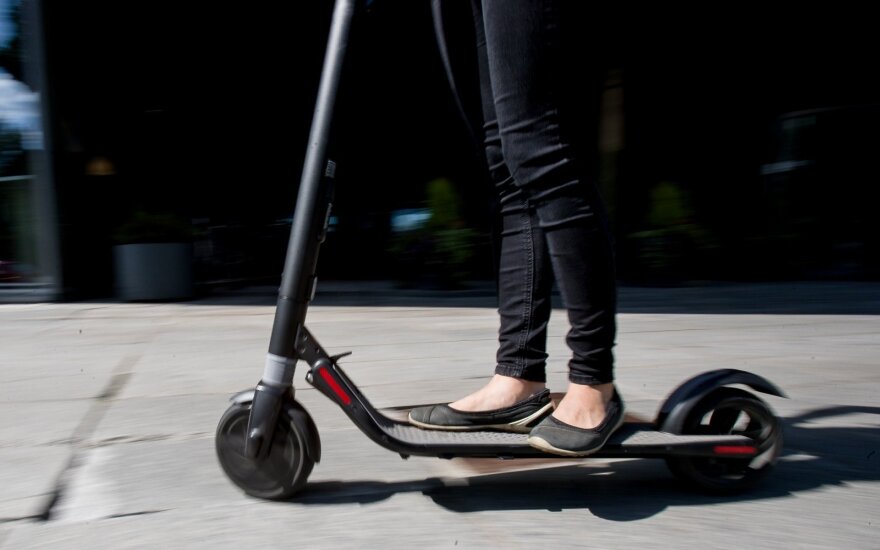 "Fast and open Vilnius salutes all companies of the country and the world which are willing to provide Vilnius city dwellers and its guests with the services of sharing the means which help ensure micro mobility. I am delighted that there are five companies in Vilnius which will offer us an excellent alternative to travelling within the city; meanwhile, Vilnius will remain a free rolling zone and will do everything to provide the best conditions possible for the companies which develop similar projects," Vilnius city mayor Remigijus Šimašius said.

Related articles
A new co-working space UMA GO9 in downtown Vilnius will be filled with Nordic motifs of nature
Electric scooters: five tips on choosing the best one

According to Mr Šimašius, electric scooters have become part of a sustainable mobility system in the city and also excellently complement the ecosystem of public transportation as well as obligate the management of the city to ensure the required infrastructure which has received much attention in recent years – new pavements and cycle-ways have been built in a record-beating pace.

A corresponding memorandum has already been signed by companies which plan to provide electric scooter sharing services as soon as this year. Among the companies are the following: CityBee, Flash, MyScoote, Swop, Unicorn Scooters. This memorandum demonstrates the city's commitment to improve the quality of cycling paths and pavements – this will help the capital city dwellers to choose such innovative means of transportation as electric scooters for their travels within the city instead of using their personal cars.

As Anton Nikitin, project manager of Sustainable Communication Division of the municipal company Susisiekimo Paslaugos, put it, an electric scooter is an extremely convenient choice for going short distances within the city.

"Journeys within the city are often fairly short and do not exceed 1 kilometre; for this reason, such transport means as a scooter enables people to avoid stress while making their daily journeys to work, to a cafe during their lunch break, to a bus stop or any other place in the city. In addition, to implement the plan of sustainable mobility in a consistent manner, Vilnius undertakes to further conduct the enlargement of the cycling paths' network to make movement without a car more convenient and attractive for city dwellers," the project manager of Sustainable Communication Division of the municipal company Susisiekimo Paslaugos, noted.

The sharing of scooters will be implemented based on the principle of free-float, which means that using a app you will be able to find the points on the map with available scooters – it will be possible to take a scooter in one point and leave it in another. Just like every road user, scooter-riders will have to observe general road traffic rules. Scooters will have integrated sensors which will provide rental service points with information on the location of a scooter, of any defects, etc.

In accordance with the Road Traffic Rules, riding an electric scooter is equivalent to riding a bicycle – it should be used on bicycle infrastructure, and where this is impossible – a road or a pavement should be used, pedestrians should be passed by at a speed similar to walking. Service providers suppose that the service will be available to persons aged 18 and older, driver's licence will not be required. A fully charged scooter will be available for journeys no longer than 45 kilometres and they will be able to reach up to 25 km/h speed.

For the past four years Vilnius has invested particularly much in the infrastructure of cyclers and pedestrians. Almost 40 km of cycling path connections and 67 km of pavements were installed and restored. The required infrastructure stretches as far as to residential areas, exactly, where people need it most.

In a few coming years, it is planned to complete developing the network of incessant and convenient main cycling paths and ensure considerably more secure and pleasant communication by bicycle in the urban area of the city. This year, connections with the length of 30 kilometres are planned to be installed on both sides of the river Neris as well as along the Vilnia river, Pilaites avenue and T. Narbutas street, in the so-called Žirmūnai Triangle – Žirmūnų, Minties and Tuskulėnų streets, in the Northern part of the city territory – the Neris valley territory and along Linkmenų street; works are also to be launched in Žalgirio, Rinktinės, Širvintų, Giedraičių, Kernavės streets, Kareivių and Žirmūnų streets and in the residential area of Naujamiestis – in Algirdo, Geležinkelio, Dariaus ir Girėno streets.

The aspiration is to restore at least 20-30 km of pavements in the city annually.

Electric scooters: five tips on choosing the best one

Residents of Vilnius and sports community of the country can mark today as a day to remember – the...

An international architectural idea competition for the National Concert Hall has been launched....

Can a Christmas tree send a social message? It can in Vilnius

A Christmas tree unveiled in Vilnius this week looks nothing like the shiny decorated trees usually...