BNS EN
aA
Russia's nuclear energy giant Rosatom, which is building the Astravyets nuclear power plant in Belarus, had plans to gain a foothold in Lithuania, according to declassified material provided by the State Security Department to the parliament's Committee on National Security and Defence. 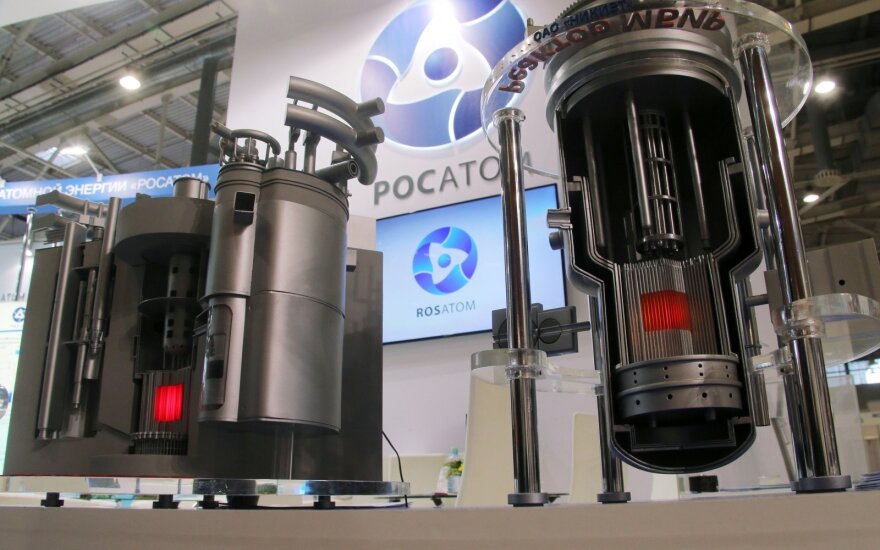 People involved in Rosatom's plans in Lithuania included former KGB agents Kėstutis Puidokas and Piotr Voyeiko, as well as Yevgeny Kostin, a close friend and business partner of Voyeiko. Kostin used his acquaintance with Mindaugas Bastys, a member of the Lithuanian Social Democratic Party (LSDP), to get closer to the party's top leadership and to win favor from Algirdas Butkevicius, its chairman.

According to intelligence information, Rosatom sought to take a stake in Vėtrūna, a local construction company, in exchange for repaying a debt that had accumulated as Nukem, a German company controlled by the Russian corporation, was not paying for spent fuel storage facilities at the Ignalina nuclear power plant. Rosatom also offered future contracts at its planned nuclear power plant in Kaliningrad in exchange for shares.

Rosatom also sought to establish close contacts with other business people and Social Democratic leaders. According to the State Security Department, Alexander Merten, head of Rusatom Overseas' office in Kiev, was the person who undertook the task and Kostin acted as his intermediary.

It was decided to set up a consortium of Rosatom's companies and Lithuania's construction companies Vėtrūna, Eika and Panevėžio Statybos Trestas. Kostin and Adolfas Ginaitis of Vėtrūna met in Moscow in October 2012, but the talks were difficult as the Lithuanian company wanted Rosatom to pay off debts before speaking about any future orders from the corporation.

"From the very beginning of the plan, the interests of Vėtrūna differed from those of Rosatom: for the Lithuanian business people, it was more important to recover the debt (although they were interested in new orders from Rosatom, too), while for Rosatom's top managers, it was more important to establish contacts with Lithuanian government officials and start implementing projects of strategic importance (while at the same time going ahead with plans to obtain a stake in Vėtrūna)," the Lithuanian intelligence said.

The talks stalled and stopped altogether in early 2014 after information about meetings between Rosatom's people and Bastys surfaced in the public domain.

According to intelligence information, after another failed attempt to meet with Butkevičius in February 2013, a meeting was arranged between Merten and Vydas Gedvilas, the then speaker of the Seimas. Kostin and Bastys were also present at the meeting.

Merten said during the meeting with Gedvilas that Rosatom was ready to invest in Lithuania: to build power lines and establish a joint venture. The Russian corporation also expected to use the Kruonis Pumped Storage Plant. Merten proposed that Lithuania should sign a contract to purchase electricity from the planned Kaliningrad plant and that it should join the project as a shareholder. Merten told Gedvilas that Rosatom was ready to come to Lithuania with its project and that it would want a 25 stake in the Visaginas facility.

Merten managed to meet with the-then Prime Minister Algirdas Butkevičius slightly more than a week later. Merten, accompanied by Kostin, took part in the meeting at the Ignalina Nuclear Power Plant on February 22, 2012 and proposed to Butkevičius that Lithuania participate in the Kaliningrad project and build a power interconnection with the Russian enclave, as well as cooperate in nuclear energy.

Rosatom's plans in Lithuania were derailed by Russia's annexation of Crimea, as well as Lithuanian President Dalia Grybauskaitė's opposition to the nuclear giant's investments. Also, Bastys failed to secure the backing of the Social Democrats.

"Rosatom's top managers were not satisfied with the too small achievements in obtaining political support, especially from the prime minister. In their own assessment, the president's hard stance was the key reason behind Rosatom's failure," the department said.

Belarusian officials have decided to refuse entry to a handful of members of the European Parliament...

Mindaugas Bastys , a member of the Social Democratic political group in the Seimas, says that he...