DELFI EN
aA
In 2019 47 foreign direct investment (FDI) projects were attracted to Lithuania, including companies from the prestigious Fortune 500 list. It is expected that 4,600 new jobs will be created, some of them with average gross salaries up to €4,000, "Invest Lithuania" counts. 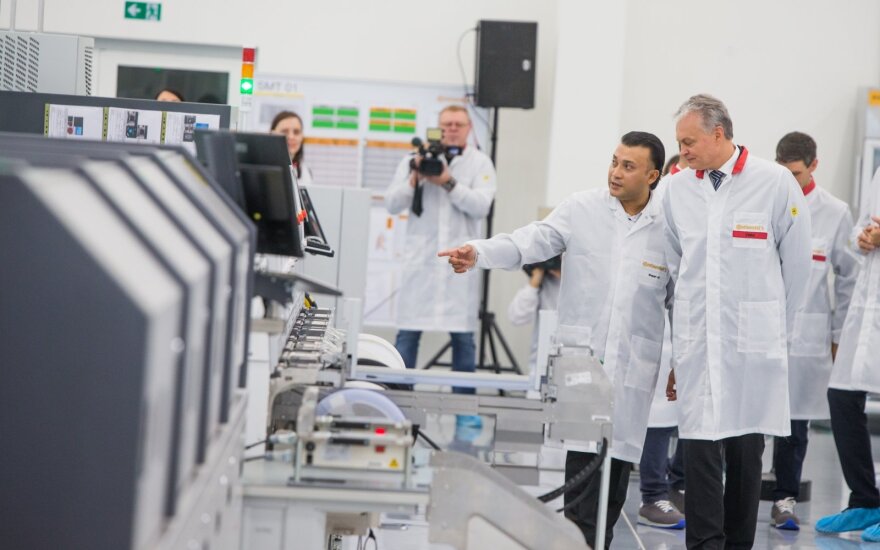 Invest Lithuania, the Lithuanian investment promotion agency points out that last year distinguished by project maturity, the growing number of high value-added jobs, and increasing international attention. World-class brands were attracted from both US and European markets. Continuing to consolidate its fintech industry, Lithuania received international recognition and now is the 4th on the Global Fintech Index. Lithuania’s steady improvement of investment environment hasn’t been overlooked. Last year the country has reached yet the highest 11th place for the ease of Doing Business.

“Two years ago Lithuania has already exceeded the threshold of 4,000 new jobs attracted. Thus, now great attention is dedicated for the quality of investments. One of the main goals is to attract those projects that would create new competencies, such as artificial intelligence, process automation, in the country. Likewise, it would integrate Lithuania into new business value chains”, says Marius Skuodis, the vice-minister for Economy and Innovations.

At the end of 2019, the Global Business Services (GBS) sector employed around 19,000 professionals in Lithuania and, based on preliminary data, contributed 1.2% to the country’s GDP. Last year also marks the highest number of Fortune 500 companies investing in Lithuania. AmerisourceBergen, Dana Incorporated, and McKesson joined the growing cluster of global service centres. Meanwhile, Western Union’s Centre of Excellence, which has been successfully operating in Lithuania for almost 10 years now, announced that it is going to boost its team with another 300 professionals.

“Last year we congratulated not only the newcomers to Lithuania but also the veterans, who have been successfully operating here. It is particularly exciting that the companies quickly acknowledged the professionalism of Lithuanian talents and trusted them higher value-added jobs with more difficult functions.; for instance, process automation, big data analytics, money laundering prevention, etc. The consistent growth of the ecosystem and development of functions continues to strengthen Lithuania as the market leader of service centres in Northern Europe.”, Katinas says.

Such fast-growing tech companies as Velocity Black, Cloudeon, Beyond Analysis have chosen Lithuania to expand their business. The wide range of products to be developed here will not only improve the competences of local talents in the fields of cloud technology, artificial intelligence, automation, and software engineering. It will also boost Lithuania’s chances in attracting more high value-added companies.

Lithuania remains strong in attracting fintech companies. In 2019 the Lithuanian FinTech ecosystem welcomed big market players such as Earthport (which was acquired by Visa, the largest consumer credit card payment system operator in the world), Sum Up, Verse, Sonect and others. And Simplex, a well-established Israeli company, has decided to triple its team in the capital Vilnius.

“Lithuania has already been globally acknowledged as one of the major players in FinTech. However, we notice two main challenges emerging in order to maintain the country at the forefront. First, we have to keep developing the country’s competitiveness as other countries are starting to copy the current innovative licencing model of the Bank of Lithuania. Second, we have to make sure that the companies already present in Lithuania could successfully develop their functions”, outlines Katinas.

In 2019 manufacturing giants Continental and Hollister opened their production lines in Kaunas Free Economic Zone. Leesys Electronic Systems and Bar Cargolift invested in two other Lithuanian towns, Šiauliai and Panevėžys. These decisions show that the Invest Lithuania strategy to expand automotive manufacturing industry into other regions is working.

According to Katinas production volumes has been shrinking in Germany since the last year. Therefore, some companies are forced to reconsider their investment plans. “Last year, the overall mood of the global economy was rather dim; hard Brexit, the threat of trade tariffs controlled by USA and China, all these facets minimize the will of manufacturing companies to expand their services or build new traditional factories. However, at the same time the technological revolution opens new possibilities for engineering companies. The latter can invest in new technologies such as batteries, artificial intelligence or sensors. Lithuania has a perfect chance to tap into this new trend”, states the Managing Director of Invest Lithuania.

Process automation was also a breakthrough area in 2019 and this tendency is likely to remain strong in the new decade. Invest Lithuania is actively engaged in the development of this area: a retraining project is to be confirmed, new education programmes at universities and private academies are being certified, and local community of professionals is being formed.

“Lithuania certainly becomes a country where businesses can develop their newest solutions that require exceptional competenties and highest IT standards. Our country’s potential, in this particular area, could be stronger if we would increase the number of doctorates in particular science areas”, says Katinas.

Our strength lies in talents, but will It last for long?

Invest Lithuania estimates that declining number of talents available to develop investors’ products is going to pose one of the biggest challenges for the country. The rapidly growing demand of niche competences highlights the lack of professionals in the fields of machine learning, robotic and intelligent process automation, embedded software engineering, big data analytics, cloud computing and alike. The difficult situation of the education system in regions exacerbates the problem even further.

“The demand for professionals in IT and engineering will keep growing over the next year, yet not only in Lithuania, but all around the world. If we will not introduce some major changes, we may soon lose our competitive advantage against other countries. So far, we have seen some sporadic positive initiatives by universities, but if we want a breakthrough, a consistent state policy is a must”, stresses Katinas.

The remaining goal still is to continuously make the country more attractive to highly skilled foreign professionals. Likewise, there is still much to do in order to reduce the burden of regulations, strengthen country’s potential for innovations, improve infrastructure, evolve financial stimulus packages for scientific researches and development projects, as well as focus on improving the start-up ecosystem.

US investor opens technology center in Vilnius: plans to hire 200 engineers and programmers

Invest Lithuania , the official agency for foreign direct investment and business development in...

2019 is a memorable year in the Lithuanian start-up ecosystem: the number of innovative companies is...

Six years ago one of the largest privately owned logistics companies in the Nordic region...