EN.DELFI
aA
“Elinta Charge” took home a major award at the “Red Dot: Product Design” awards in Essen, Germany on 9th July 2018 for its “CityCharge V2” electric vehicle charging station, which was designed and developed for public and commercial use, a press release from the company states. 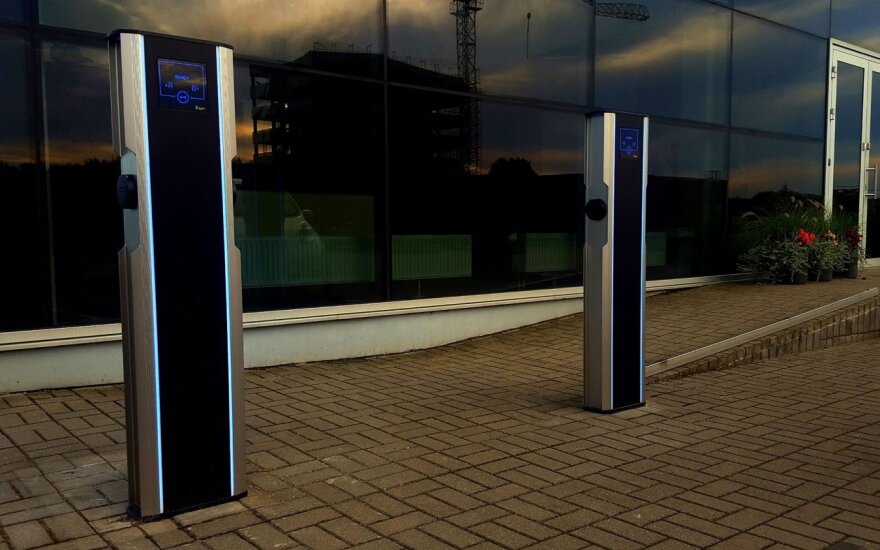 A joint project created by a team of Kaunas based designers, technicians and engineers: "CityCharge V2" is the product of a desire to create the perfect marriage of design and cutting edge technology. As Ignas Mikutis, CEO of "Elinta Charge", explains, "It was our goal to develop the highest quality, globally competitive product. And in achieving this goal, technology plays a no less important role than aesthetics. And we're happy to say that we've been able to realise this vision here."

The "Red Dot Award: Product Design" is open only to global manufacturers and designers whose products are manufactured using an industrial production process and whose products have been launched within the last two years. "CityCharge V2"was developed at the end of 2017 and has already attracted considerable interest from Scandinavia, Germany, the Netherlands, Israel, Southern Europe and neighbouring countries, with 80% of production so far going to export markets.

Related articles
The Centre of Excellence of Creative and Cultural Innovations in Kaunas
Lithuania must rely on innovation, not EU money, to avoid middle-income trap - EU official

What is it that has led the "CityCharge V2" charging station to establish such an international reach in such a short period? According to the company's clients, it's a mixture of the quality of the product's assembly, its components, its management system, and, of course, its unique product design.

The ground-based, specially-equipped aluminium charging chassis of "CityCharge V2", is a standard for the IEC62196 Mode 3, and is classified as medium -fast charger. With a charging power of up to 44 kW (22 kW per socket), it allows for the quick charging of two cars at once. The station includes intelligent energy metering, LED indicator lines and screen, and an energy balancing system that allows for the optimisation of the electric power supplied to the point. It also incorporates RFID technology which enables user identification with an electromagnetic card, as well as the monitoring of station performance and energy usage. Remote monitoring and remote control is also made possible via the station's communication and back-end system.

The company has ambitious development plans going forward. As company CEO, Ignas Mikutis, explains, "We have a product of exceptional quality with excellent technical characteristics and aesthetics, one which has received recognition not only from "Red Dot" but from our partners and potential customers across Europe and beyond. We are currently closing an investment deal, and we will be expanding our team soon. These factors, along with the growing demand for our product will allow us to increase production tenfold in the upcoming year. This in turn will allow us to establish ourselves in the markets where we already have a presence and step by step expand geographical coverage in the next few years. What's more, we are confident that the regulatory changes that the market is now experiencing will work in our favour. Where in the past, interest predominantly came from Scandinavian countries and Southern Europe, we believe that we will soon be able to expand into Eastern Europe, as there is currently much regulatory development happening there in the field of electric vehicle infrastructure."

This year, designers and manufacturers from 59 countries entered more than 6,300 products in the Red Dot competition. Encompassing 48 diverse categories ranging from fashion and accessories to consumer electronics and vehicles, household appliances and furniture, awards were presented in three categories, "Honourable Mention", "Red Dot: Winner" and "Red Dot: Best of the Best". A team of 39 experienced jury members issued the awards based on the criteria of product innovation, functionality, quality, product ergonomics and ecological compatibility.

"Elinta Charge" is a Lithuania based developer of European standard IEC 62196 and IEC 61851 electric charging stations suitable for all models of electric cars and plug-in hybrids. They began operations in 2011 as a department of the high-tech company "Elinta." From July 2018 the company has been operating as "Elinta Charge" - a developer and producer of electric car charging stations for home and public use.

The Centre of Excellence of Creative and Cultural Innovations in Kaunas

The Centre of Excellence (CoE) of Creative and Cultural Innovations is scheduled to open in Kaunas as...

100 women of Lithuania that all Lithuanians worldwide are proud of! (1)

The list of women that Lithuanians worldwide is proud of has been announced. It has been created for...