DELFI EN
aA
“Task after task, conversation after conversation and here I am, working at one of the IT giants”, says Kaunas University of Technology (KTU) graduate Aidas Balčaitis, who now works at Amazon. Two years ago, Aidas graduated from Software Systems bachelor’s at KTU Faculty of Informatics. 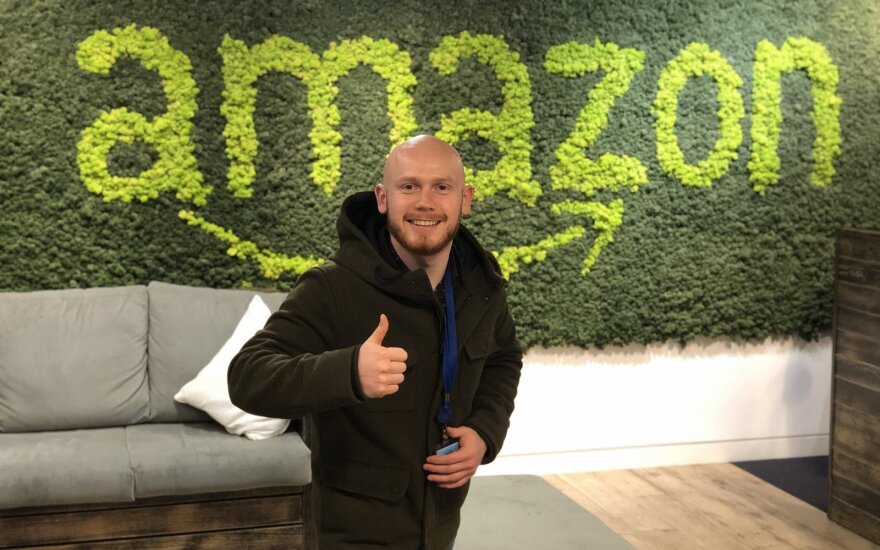 Aidas has been working as a software engineer at Amazon in Dublin, Ireland, since January 2020. Like many people all over the world, he is working from home today. The pandemic changed his daily routine: “Although this organisation is huge, many departments, like ours, no longer work in offices”.

KTU graduate believes that life will soon go back to normal. Therefore, those who dream of a prestigious job may benefit from his experience, KTU writes in a press release.

The greatest value – working together with talented people

“A recent graduate, a young specialist from Lithuania, who grew up in a great university called KTU, today I work with people from Google, Microsoft, IBM, Cisco and other companies”, says Aidas.

Related articles
Separated by distance, united in celebrations: story of Lithuania and India  (1)
Researcher in Kaunas from India: this city has changed immensely  (1)

According to him, people do not consider themselves celebrities here. His impressions are the opposite: “Nothing like that. Although the staff here are smart, at the same time people don’t take themselves too seriously, everyone is friendly. They are ready to help whenever you need.”

Aidas is surprised that colleagues are fast to help: “If you need something, someone is causing inconvenience, or you have questions, you will not receive an answer, that we are solving the problem and we will answer the next working day. No, everything happens fast here, all issues are being resolved in a day. Every employee is important.”

The company also has to be up to speed when solving customer problems. Aidas confirms that the leadership principles of Amazon meet the company’s culture standards. The first principle – customer obsession – is the most relevant. Figuratively speaking, employees must be obsessed with customers while also every decision must begin and end with the customer needs. All improvements are meant to make the process easier and more convenient for the customers.

Lithuanian is convinced that Amazon’s customer orientation is evident everywhere: from services to the company’s motto “the prices of our services will never rise; they will only decrease”. To his knowledge, the company has reduced Amazon Web Services prices several times.

“As Confucius said, if you are the smartest person in the room, then you are in the wrong room. I can say that you will never be in the wrong room here during your whole career”, Aidas jokes, “We have people who work in this team for 5 and 10 years. They are constantly learning and improving to solve customers’ problems”.

According to him, those who get a job at Amazon should expect to be surrounded by talented people from whom you can gain endless experience: “You have to come here ready and take everything you are given.”

After graduation – confrontation with reality

Although he has always been an advanced student, Aidas started to think about his career in the final year of bachelor’s studies. While studying, he was in no hurry to look for a job. Aidas paid more attention to studying and to different activities in student union.

“While studying, I had been receiving scholarships for maintaining good grades: Carol Martin Gruodis Foundation scholarship at KTU Faculty of Informatics. A few hundred euros seemed wow to me! I thought that I was doing well, I could study and not worry about working”, he recalls.

However, Aidas soon felt the consequences. At the end of his studies, while looking for an internship and a job, he realised that no one was in a hurry to give the position he wanted. “I felt bad because my course mates had work experience and what did I have? Scholarship experience?” he remembers feeling frustrated.

The most disappointing thing was that the dream of working as an IT specialist in the so-called FAANG (Facebook, Amazon, Apple, Netflix, Google) seemed unattainable.

“I couldn't even get a job in smaller companies I'd heard about at the university. For example, I couldn't get into Devbridge, Bentley or other IT companies then”, says Aidas.

He finally got his first job at Baltic Car Equipment. The company developed transport control equipment and systems. “Thanks to the company and my manager, Maksimas Joda, I was thrilled that I could finally get real work experience, and also receive a salary for that”, Aidas recalls.

He says that although he had been a subordinate in the company for several years, he was not aftdid to act on his initiative. These qualities came from the student organisation RAFES. “I learned a lot in the student organisation, but one of the most important things was the idea that it is important not only to learn for yourself but also to share knowledge with others. While working, I took every opportunity to learn: I went to lectures, training, and invited colleagues to study together”, says Aidas.

A year and a half later, Aidas got the position of a team leader. "It's fun to be appreciated not only by words but also by actions. But when one dream comes true, you have to think about another. This time I tried to come up with something out of reach”, says Aidas.

Fortunately, Aidas saw Amazon’s message in Lithuania that the company was looking for a team member. “It looked like a great opportunity to test my skills and strengths. Without waiting for anything, I wrote that I was interested”, says a software engineer.

The IT specialist admits that he had some scepticism because it was hard to believe in a possible success: “If at the beginning I could not get a job in larger IT companies in Lithuania, then what about this? Well, after receiving the message that I had passed the first stage, I became even more determined and I prepared thoroughly.”

Aidas searched for information everywhere: “Probably like everyone else, I looked on Google, watched YouTube videos, looking for the slightest hint of what I can expect further. I followed the present employees and those who were unlucky in the selection. I tried to learn as much as possible so I could prepare.”

To get the job, Aidas went through all three selection rounds. First, company representatives gave a few timed tasks online. Then he had an interview via phone. At the final round, he travelled to Dublin for the interview.

For those dreaming about a job in a globally famous company he has a tip: check out STAR method, which helps to structure and to answer the question by helping you to better understand what you want to say.

However, the most important quality for seeking for a dream job is perseverance.

“In life as in sport, the winner is determined not by luck, but by determination and time. Nobody has born into being a perfect sportsman or the best IT specialist. However, if you put effort and aim to progress and develop, in time you will achieve your goals. 20 minutes of progress every day is always winning against 2 hours of work in the last day”, says KTU graduate Aidas Balčaitis, today working at Amazon.

Researcher in Kaunas from India: this city has changed immensely (1)

29.15 per cent efficiency is the new world record for a tandem solar element. The record-breaking...

A team of Kaunas University of Technology (KTU) GIFTed Talent Academy students have come up with an...