BNS
aA
Lietuvos Geležinkeliai (Lithuanian Railways) has submitted to the European Commission a plan for rebuilding a dismantled railway track from Mažeikiai, a town in northwestern Lithuania where Orlen Lietuva's crude refinery is located, to Rengė, in Latvia, by the end of 2019. 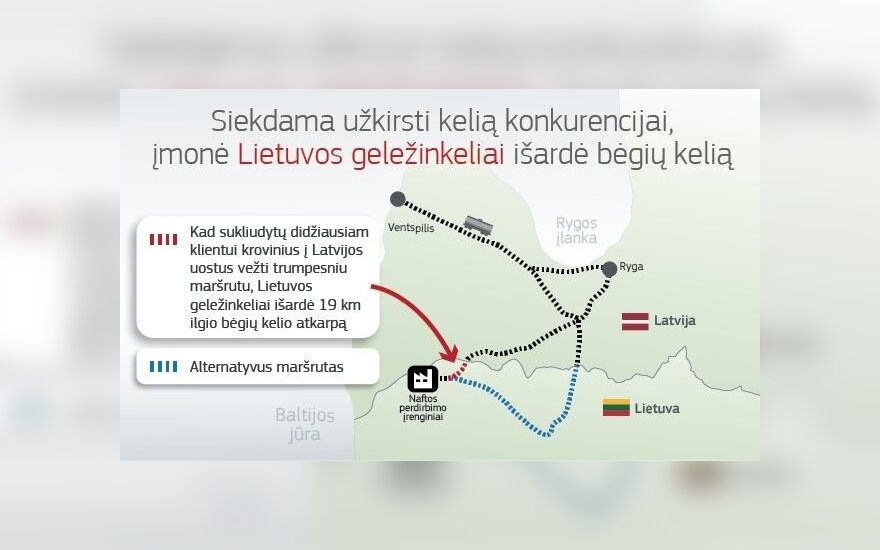 The dismantled railway track from Mažeikiai marked in red

"At the end of last week, we submitted the plan to the European Commission for approval. It calls for rebuilding the railway section by the end of 2019," Mantas Dubauskas, spokesman for the state railway company, told BNS.

He said that the EU's executive body was expected to approve the plan by Mar. 1.

The spokesman added that the company would not give further details, including estimated costs, for the time being.

Earlier estimates put the cost of rebuilding the Renge track, removed back in 2008, at around 20 million euros, but Lietuvos Geležinkeliai CEO Mantas Bartuška has told BNS that he expects it to be lower.

Ricardo Cardoso, spokesman for competition at the European Commission, confirmed to BNS that Lietuvos Geležinkeliai had submitted a proposal for remedying the competition infringement for which it was last October slapped with a fine of almost 28 million euros.

"We are monitoring Lithuanian Railways' remedy design and implementation," he said.

Maris Ozols, spokesman for Latvian Railways, told BNS that Latvia had not been provided with the plan.

"Lithuanian Railways have not yet presented the plan you describe, therefore, we cannot comment on our actions regarding that," Ozols said.

"However, position of the Latvian Railway has not changed -- we are still looking forward to Lithuanian Railways to keep its promise and restore the railway infrastructure and railway connection on Lithuanian side as soon as possible so the line can be operated," he added.

Lietuvos Geležinkeliai last December filed an appeal to the EU's General Court in Luxembourg over the 27.87-million-euro fine imposed by the European Commission for hindering competition and in early January paid the fine from its accumulated reserve.

A special government commission in Lithuania will be able to vet state-owned and privately-owned...

After Lietuvos Geležinkeliai (Lithuanian Railways, LG) announced its plans to rebuild a railway...