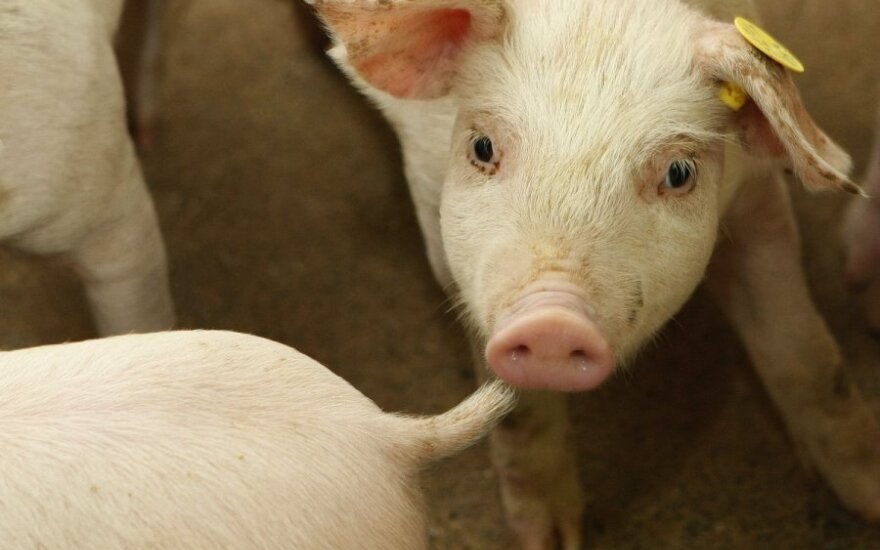 At a press conference on Tuesday, director of the Lithuanian Pig Producers Association Algis Baravykas said that after two wild boars had been found dead last January, 2,000 pigs and 8,000 piglets had been culled. Following the discovery of ASF in Idavang farm, 19,500 more pigs were destroyed.

The director of the Lithuanian Pig Producers Association also presented losses incurred due to a drop in prices. Approximately 1 million pigs are slaughtered per year, about 100,000 per month. It is estimated that the price of a pig has declined, on average, by LTL 50 (EUR 14).

"The total losses of the sector amount to LTL 5 million (EUR 1.4 million) per month. And well, the price has declined, how long it lasts, we will see. Additionally, all these Russian troubles add to this," said Baravykas.

He revealed that some pig farmers were already thinking of leaving the business. Baravykas said that a more intensive prevention of ASF as well as wild boar population regulation plan was necessary. He voiced criticism against the State Food and Veterinary Service for burying dead animals instead of incinerating due to shortage of equipment, and thus failing to ensure that the outbreaks would not reoccur after several years.

In early 2014, the virus was found in dead boars. On 24 July, the disease erupted in a pig farm managed by Danish company Idavang in Ignalina district. 19,000 pigs in this farm had to be culled.

Having established a working group, the Baltic countries together with Poland will address the European Commission over financing to tackle ASF.

The EC will be addressed regarding prevention and control of the African swine fever, support for small pig farmers and establishment of a team for liquidation of contagious disease hotbeds.

Prevention measures requiring funding will include ASF research and monitoring, disinfection of vehicles at the border, establishment of joint scientific centre for the Baltic countries and Poland, acquisition of mobile laboratories, regulation of boar population, and lastly information activities.

Last year the European Commission allocated almost EUR 1.5 million to Lithuania for prevention of ASF, though Lithuania had asked for EUR 14 million.

A dead wild boar infected with African Swine Fever (ASF) was found near the Rupinskai pig complex in...

Government commission decides against national state of emergency in Utena

At a meeting on Friday the Emergency Commission of the Lithuanian Government decided against declaring...

The second outbreak of African swine fever (ASF) has been reported in Lithuania.

Prosecutors of Panevėžys County Prosecutor's Office continue a pre-trial investigation into the...