DELFI EN
aA
The United States held on to the number one spot in IMD World Digital Competitiveness ranking (WDCR) in 2019, with all top five economies in the ranking unchanged: USA, Singapore, Sweden, Denmark and Switzerland. 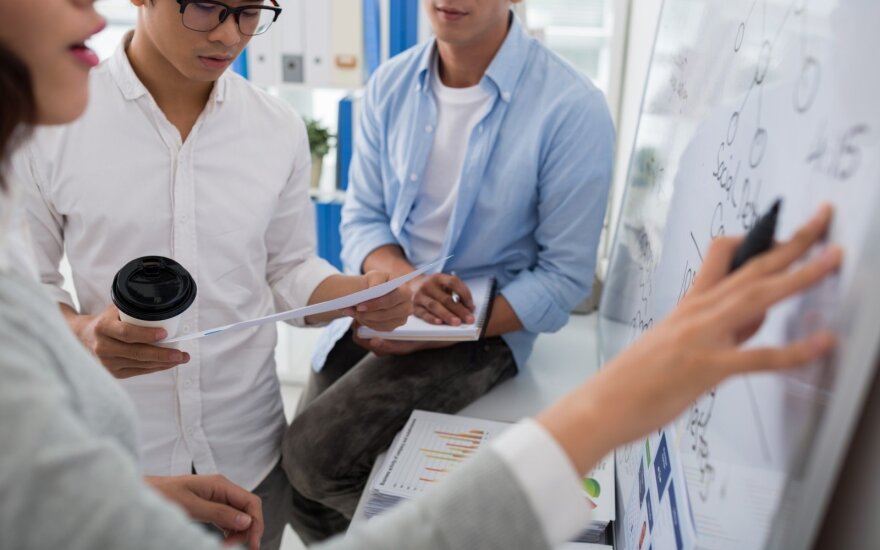 Lithuania drops to 30th place from the 9th last year.

In the Top 10, the Netherlands, Hong Kong SAR and Republic of Korea moved up (to 6th, 8th and 10th, respectively), while Norway dropped to 9th and Canada fell from 8th to 11th, announces IMD in a press release.

Now in its third year, the WDCR, produced by the IMD World Competitiveness Center, measures the capacity and readiness of 63 economies to adopt and explore digital technologies as a key driver for economic transformation in business, government and wider society.

Technology not only affects how businesses perform but also how economies function and prepare for the future. Governments around the world are investing heavily in their digital economy to enhance value creation and prosperity.

The Top 5 share a common thread in terms of their focus on knowledge generation, but they each approach digital competitiveness differently. The United States and Sweden follow a balanced approach between knowledge generation, the creation of a supportive environment for technology development and a readiness to adopt innovation. Singapore, Denmark and Switzerland give priority to one or two factors.

“In the midst of uncertainty and a fluid global situation, it seems that business and societies that are agile correlate strongly with the IMD World Digital Competitiveness ranking. Knowledge also remains of paramount importance for the digital performance of different economies,” stated Professor Arturo Bris, Director of the IMD World Competitiveness Center.

Several Asian economies advanced significantly in the ranking compared to 2018. Hong Kong SAR and the Republic of Korea entered the top ten while Taiwan and China moved up to 13th and 22nd respectively. All these economies experienced marked progress in their technological infrastructure and the agility of their businesses. Further down the ranking, India and Indonesia jumped four and six positions respectively, supported by positive results in talent, training and education as well as the enhancement of technological infrastructure. 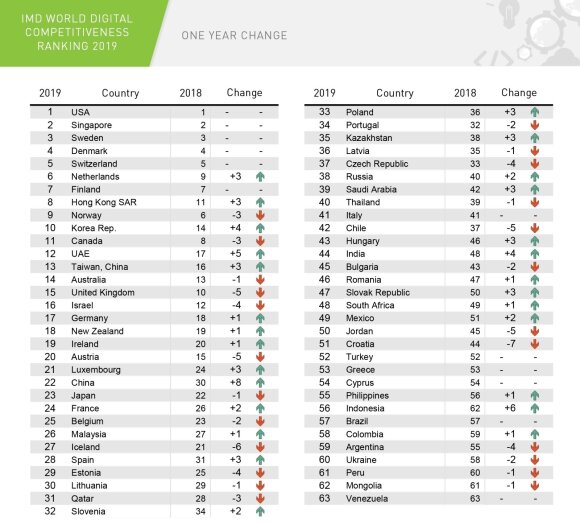 In the Middle East, the UAE and Israel remained as key regional digital hubs but followed opposing trends with respect to 2018. The UAE climbed five places thanks to improvements in capital availability and supportive regulation for technology development. Israel dropped four positions, due to a decline in business agility and e-government indicators.

In Latin America, Mexico and Colombia were the only economies to advance in the ranking this year. The lack of resources to support talent and technological development prevents most economies in the region from improving knowledge generation and getting the most from digital transformation.

To evaluate an economy, WDCR examines three factors: knowledge - the capacity to understand and learn the new technologies; technology - the competence to develop new digital innovations; future readiness - the preparedness for the coming developments.

This year, two new variables related to robotics were introduced in the calculation of the WDCR: “industrial robot” to measure the total number of robots in operation, and “robots in education and R&D” worldwide. The data is provided by the International Federation of Robotics.

The IMD World Competitiveness Center (WCC) is a research center at IMD in Switzerland with 30 years of research expertise in competitiveness.

Spain's Arquivio Architects tops the ranking of best architectural ideas at an international...

Up the ladder: Lithuania rises in World Talent Ranking

Lithuania has gone up by eight notches to 28th position among 63 countries in the IMD World Talent...