EN.DELFI
aA
As it is almost clear that that UK banks, investment managers, payment service providers and other financial institutions will lose their “passporting rights” to do business in the European Union, Lithuania competes in attracting international financial companies leaving the UK. The Northern country uses the opportunity to become the forefront of financial technologies in the region and there are many reasons to believe about this success. An attractive legal and technological environment, business minded and advanced supervisory authority open to financial market innovations, qualified and competitive workforce, opportunities to operate across the EU basing from Lithuania – that‘s what put Lithuania to one of the best places on the global FinTech map already now. 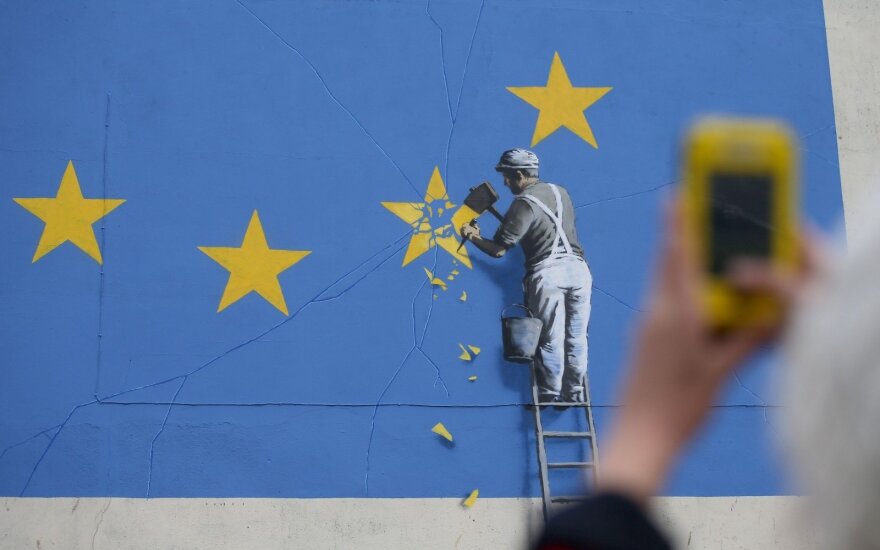 Brexit: no exceptions for finance institutions

"BREXIT means BREXIT, everywhere. Those who claim that the UK should pick parts of the single market must stop this contradiction. The single market is a package, with four indivisible freedoms, common rules, institutions, and enforcement structures", - EU chief BREXIT negotiator Michel Barnier stated in his speech in Brussels on 20 November 2017. It could be no options to parts of the single market for certain industries. UK financial service providers will lose their access to the common European market of 500 million consumers and 22 million businesses.

Currently the UK licensed financial service providers enjoy the possibility to access all the EU financial markets, passporting their UK issued licenses in to the other EU member-states. "On financial services, UK voices suggest that BREXIT does not mean BREXIT. BREXIT means BREXIT, everywhere", - Mr. Barnier said. On the same day, the EU announced relocation of the European Banking Authority (currently based in London) to Paris. Over 5,400 London City firms rely on passporting rights to bring in £9bn in revenue every year to UK. The British Bankers' Association has said the loss of passporting would be "disruptive, costly and time-consuming".

The UK licensed financial services providers need to act now, in order not to lose their access to European common market of 500 million consumers. The solution is not to get the license within EU. Other EU member-states extensively offer their licensing jurisdiction for UK companies. Malta, Ireland and Luxembourg even considered overcrowded by the applicants and currently facing delays in the licensing procedures.

The Lithuania Tribune asked Marius Jurgilas, the Board Member of the Bank of Lithuania, what the Bank of Lithuania and Lithuania in general could do better in order to attract the UK financial institutions to here. This is what Jurgilas had to say: 'Companies that will be affected by Brexit consequences and will possibly lose their passporting rights are already looking for alternative jurisdiction for establishment and licensing in European Union. Lithuania also attracts much of attention from UK-licensed companies.

First of all, Jurgilas continued, as these companies are looking for akin to UK jurisdiction, we must ensure that these companies do not face undue barriers in Lithuania. That's why the Bank of Lithuania together with the Ministry of Finance make a lot of effort to ensure our regulatory landscape is in line with technological progress and corresponds the needs of the market. For example, Lithuania has legalized remote customer identification procedures though it is still not commonly approved across EU. This allows FinTech companies that operates in digital environment without borders to reach all EU market from one country. Bank of Lithuania is also making licensing procedure more convenient and fast.'

Jurgilas is convinced that 'in order to attract UK companies to Lithuania, the other important factor is to ensure smooth, clear and fast establishment process for these companies. In the beginning of 2017 Bank of Lithuania launched Newcomer Programme, which helps new entrants to Lithuanian market to get better understanding of licensing procedure and requirements. Together with our investment promoting agency Invest Lithuania and other governmental institutions we are also making efforts to ensure that Lithuania is in the short list of attractive countries for relocation. For example, last year there were roadshows organized in UK where we introduced Lithuania to UK payment industry companies,' Jurgilas finished.

Lithuanian capital Vilnius is becoming a new hub for the international finance institutions focusing on European financial markets. Favourable regulatory and tax environment makes Vilnius attractive for large international companies as well as Fintech start-ups. 'During the year 2017 the Board of the Bank of Lithuania issued 14 e-money institutions licenses (during the year 2016 some five e-money institution licenses were issued); five payment institutions licenses (2016 – only one); five companies were entitled the right to run crowdfunding platforms and two – peer-to-peer consumer lending platforms,' Jurgilas, told the Lithuania Tribune. According to him currently about 20 more licenses applications are under review.

Revolut, a UK fintech start up which bills itself as a 21st century banking alternative, already uses the payment infrastructure managed by the Bank of Lithuania for Euro payment processing and recently has announced about its intentions to apply for the European specialised bank license through the Bank of Lithuanian.

UK based financial service provider Contis also has an office in Lithuania and process client Euro payments through the infrastructure of the bank of Lithuania.

Lithuania launched a campaign to attract finance institutions in to the country in early 2016, hoping to improve competition in its financial sector. The country's government and the central bank emphasise their swift response to the rise of FinTech and their willingness to embrace innovation. The government, the Bank of Lithuania and the Ministry of Finance have been working together on creating a friendly regulatory framework. Development of a FinTech-conducive regulatory and supervisory ecosystem as well as fostering of innovation in the financial sector is one of the Bank of Lithuania's strategic directions for 2017–2020.

Successful governmental efforts to create the favourable regulatory environment was realised first by international Fintech Start-ups, looking in to the opportunities to expand their business in Europe.

"To be honest, our clients applying for the financial licenses in Lithuania first of all target financial markets of the European Union, including big national markets such us Germany, France and Italy. Finance institution registered and licensed in Lithuania provides significant competitive advantage and opens up European financial market at a significantly lower incorporation and operational costs – says Inga Karulaitytė-Kvainauskienė, attorney at law at ECOVIS ProventusLaw, a law firm is specialising in financial law and financial services licensing.

One of the main advantages that Lithuania brings to the table is a particularly fast authorisation process and a broad choice of business models – from e-money or payment institutions to specialised banks, which has no equivalents in Europe. For example, following submission of all necessary documents, it takes only 3 months for the Bank of Lithuania to take a decision on the issuance of an electronic money or payment institution licence. In other EU countries, the process may take much longer.

The Bank of Lithuania has also implemented a one-stop shop principle for meetings and consultations with potential applicants. Prior to launching a business or a new product, basic information about licensing and financial services opportunities in Lithuania are provided and investors may check whether their future plans are in line with legislative requirements. In addition, companies designing innovative financial products and business solutions will be given the possibility to test them in real market conditions.

- introduction of regulatory and technological sandbox for fintech companies, in order for them to test their innovative products before entering market;

- continue working on elimination of unnecessary legal and regulatory requirements that no longer fits within the time spirit and technological progress;

For sure, we will continue spreading information about Lithuania as favourable jurisdiction for FinTech's globally,' Jurgilas promised.

Currently Lithuanian is the only European jurisdiction allowing non-banks have direct access to Single Euro Payments Area (SEPA) through Centro Link system managed by the Bank of Lithuania (regulator) and process EUR payments in SEPA without commercial bank intermediaries. Client funds are kept at account with Bank of Lithuania - Central Bank, which is a part of Eurosystem, so it eliminates the risk of the commercial bank insolvency. Lithuania also provides non-banks with their own sorting codes for individual client IBAN account generation as only the banks does in other jurisdictions. The Bank of Lithuania has also opened up the possibility for the banks and non-banking finance institutions to offer their clients the most cutting-edge innovation in the field of payments – instant payments, available 24/7/365, including weekends and holidays. This is one more

The interest is still growing

As Inga Karulaitytė-Kvainauskienė notes, the interest in Lithuania as a jurisdiction for FinTech companies to EU/EEA market is still growing. "Positive attitude of the Bank of Lithuania and the public sector towards new technology-based business and its support is already widespread. Every day we receive requests from all around the world – United Kingdom, China, Singapore, Israel, Sweden, Germany, USA, and etc. about setting up a FinTech company in Lithuania", – says I. Karulaitytė-Kvainauskienė.

This year, ECOVIS ProventusLaw has already been helping to obtain an electronic money license for the international financial advisory "deVere Group" and also mediated the Singapore-based global financial services holding "Senjo Group" with the acquisition of "Finolita Unio" which has a payment institution license. Recently, ECOVIS ProventusLaw has licensed Singapore-based "InstaReM" operating in more than 50 countries that is why assistance of ECOVIS offices in Vilnius, Singapore, Luxembourg and Germany was required during the licensing process. In November-December 2017 three Chinese companies consulted by ECOVIS ProventusLaw got e-money or payment institution licences.

Although the success of countries like Britain is not quickly or easily replicated, Lithuania believes that ambitions of a new FinTech hub were realistic - brand-name FinTech companies are coming and it is believed others will follow.

Revolut has announced this week that it has applied for a European Banking Licence and begun...

Luxembourg wants to cooperate with Lithuania in telecoms, finance, IT

Luxembourg wants to cooperate with Lithuania in the areas of telecommunications, information and...

Fintech Revolut settles in Lithuania with local office and team

Revolut has taken a further step towards positioning Lithuania as a key market as the innovative...