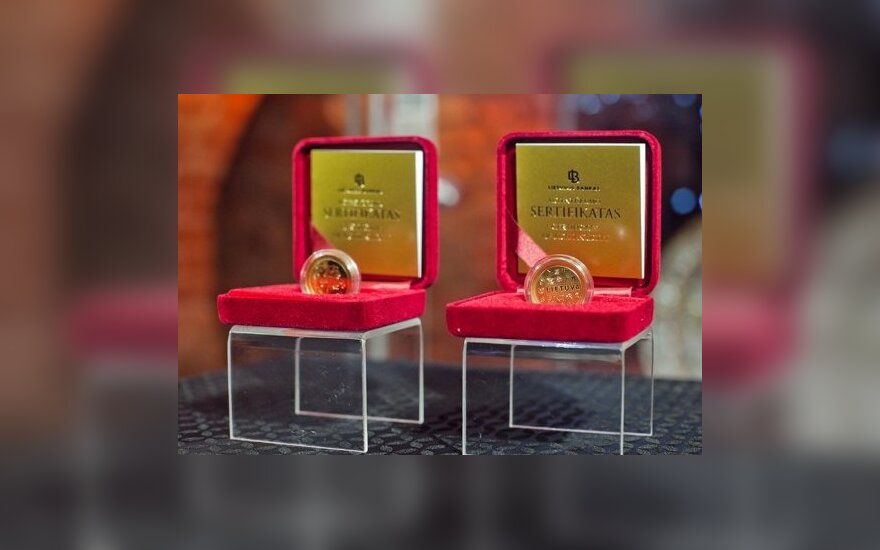 "This small gold coin, of the highest fineness, weighing almost 8 grams, or, speaking in the Grand Duchy terms, worth slightly more than 2 ducats, symbolically connects two numismatic traditions. The coin's reverse depicts the old symbols of the engravers and minters who worked half a century ago, which perfectly match the inscription Lietuva, the euro symbol and the symbol of our Mint, as well as this year's date," said Vitas Vasiliauskas, Chairman of the Board of the Bank of Lithuania, during the coin presentation event at the Palace of the Grand Dukes Museum, in the Hall of the Treasury of the Grand Dukes in Vilnius.

"It is very symbolic that the first collector Lithuanian euro coin is presented in the residency of the Grand Dukes, which, from the end of the 14th century, was not only the Treasury, but also where the coins were minted. Many have been found during archaeological excavations," notes Dr Vydas Dolinskas, Director of the Museum of the Palace of the Grand Dukes.

The obverse of the new 50-euro coin depicts in an original manner the Vytis - as a combination of a historical coin and the reverse side of a minting tool. On the edge of the coin, the inscription Moneta Lituaniae is engraved twice. The weight of the coin - 7.78 grams, or 1/4 of an ounce.

The graphic design of this gold coin was created by Liudas Parulskis and the plaster model was made by Giedrius Paulauskis.

Coins in the Grand Duchy of Lithuania were first minted at the end of the 14th century. Numismatics expert Stanislovas Sajauskas, in the leaflet issued together with the coin, claims that Sigismund Augustus was a particularly significant innovator in the coinage of the Grand Duchy. In Vilnius, on Vokiečių street, he opened a modern mint where masters from Western Europe worked. Sigismund Augustus minted the Grand Duchy's first gold coin - the ducat (florin).

The 50-euro collector coins were minted by the UAB Lithuanian Mint; their mintage - 5,000. The coins, from their date of issue, can be purchased at the cash offices of the Bank of Lithuania in Vilnius (2/8 Totorių st. and 151 Žirmūnų st.) and Kaunas (25 Maironio st.).

Each country, the currency of which is the euro, has the right to mint collectors euro coins, selecting the denomination, metal and other features at its discretion. These coins must significantly differ from circulation coins in at least two of the following three features: colour, diameter or weight. Such coins are legal tender only in the country that issues them, differently than circulation and commemorative coins, which are legal tender throughout the euro area.

The number of attempts to pay with fake euro banknotes in Lithuania, which joined the eurozone...

The construction of the world's largest pyramid made of one million Lithuanian cent coins was finished...

A march will take place in old-town Vilnius on Friday to mark the 500th anniversary of victory against...