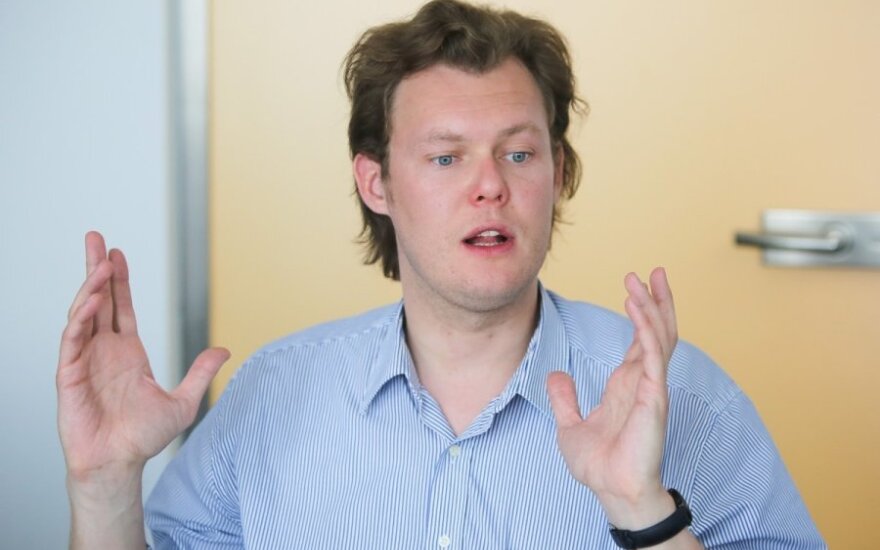 A young man in a blue shirt is casually sipping a café latte, while the music roars through the cafe’s speakers. This is a sight many might associate with Stroget, the pedestrian street in Copenhagen, rather than Eastern Europe.

Nevertheless, we are in Lithuania’s second largest city, Kaunas. The man’s name is Justinas Katkus and he is a partner in the Danish-Lithuanian tech company Blue Ocean Robotics. Together with two Danish engineers, he established the company one and a half years ago in cooperation with the Technical University in Kaunas. The three met at a conference in Lithuania last spring, and today they already have 40 employees in Denmark and ten engineers in Lithuania, who develop new robots for, among others, Danish companies.

“We started over here because of the lower costs; the production of robots is also based here. But costs are not the only reason. It is just as much about having easy access to the research environment. We handle the technical part; Denmark deals with the commercial part,” says Justinas Katkus, who previously worked for, among others, IBM.

Lithuania is also focused on increasing competiveness in areas other than just wages. The country faces tough competition from its neighbours, where wage levels are about the same. Moreover, wages are growing annually in many companies by between three and four percent.

Therefore, the current social democratic government is prioritising reform aimed at adding value for foreign investors. It is streamlining the public sector and making it less bureaucratic for foreign companies to settle in the country. The education system in particular has undergone a total transformation in recent years.

In 2008, Lithuania introduced tuition fees of between 1,000 and 5,000 Euros a year on undergraduate programs. The universities got new boards, and were empowered to change up to 20 percent of the curriculum from one day to the next, increasing their responsiveness to the needs of the business community.

Where previously more than 80 percent of young Lithuanian applicants were accepted by universities every year, now the proportion is 50 percent. The competition between universities has increased too, so they are increasingly looking beyond national borders for new students.

The most important statistic for policy makers in Lithuania, however, is that the number of young people choosing science has increased by between one and three percent each year since 2008. At the same time fewer choose social sciences or humanities.

“We see an advantage in having fewer students, but in turn educating them better,” says

Petras Barsaukas, Rector of Kaunas University of Technology, the country’s largest, and the creator of 40 companies in the last two and a half years within its entrepreneurial centre.

“It is essential for us that the ideas can transform into business. It requires a whole new culture,” he says.

Lithuanian educational institutions are prepared to go to great lengths to keep foreign companies in the country. An example is Ryanair, which last year got Kaunas Technical College to create a specific training program for flight engineers. It was a prerequisite for ensuring that the low-cost carrier would place its new hangar, with a value of just over three million, in the country.

Barclays, which needed a few hundred IT engineers with a specific qualification that Lithuanian universities didn’t teach anymore, experienced a similar situation. This resulted in a new IT training course being established.

There is still a long way to go before Lithuania and the technology park at Kaunas University can call itself Europe’s Silicon Valley. Admittedly, Danish investment in Lithuania has increased by 33 percent since 2012, but this is largely due to expansions of existing plants and facilities. With an hourly rate of between six and seven euros, slightly lower than Germany’s minimum wage and equal to just over 5.5 pounds, salaries remain one of the primary reasons why Danish companies are looking to the east.

The textile factory Danspin is a good example of the benefits of relocation. The company, which originally had their production based in Ikast, has been producing yarn at a factory on the outskirts of the small town of Raisenas since 2002. Had it not been for this relocation to Lithuania, Danspin would have closed. The company currently produces 30 tons of yarn per day and is one of the largest yarn producers in Europe. Employees work in shifts, and production runs all day.

“Compared to Denmark, we are competitive on the salary. We cannot ignore that it matters a lot. However, one of our major competitive factors is our quality. Unlike, for example, China and other Asian countries, we are far better placed for our European customers,” says the Country Director, Rosvaldas Kunickas.

He points out that wages at Danspin have risen by between four and five percent since 2012. Working hours are 40 hours per week, the staff get double pay on weekends and they can earn bonuses as well.

“The economy is very important – especially for a labour-intensive business like ours. However, the quality counts increasingly,” says Rosvaldas Kunickas.