BNS
aA
With the Lithuanian government due to decide on the future of the Klaipėda liquefied natural gas (LNG) terminal, businesses call on the authorities to look for ways to lower the terminal's costs for gas consumers and energy experts say that these costs will go down and that the floating storage and regasification unit (FSRU) will remain useful to the country in the future as gas will play an increasingly important role. 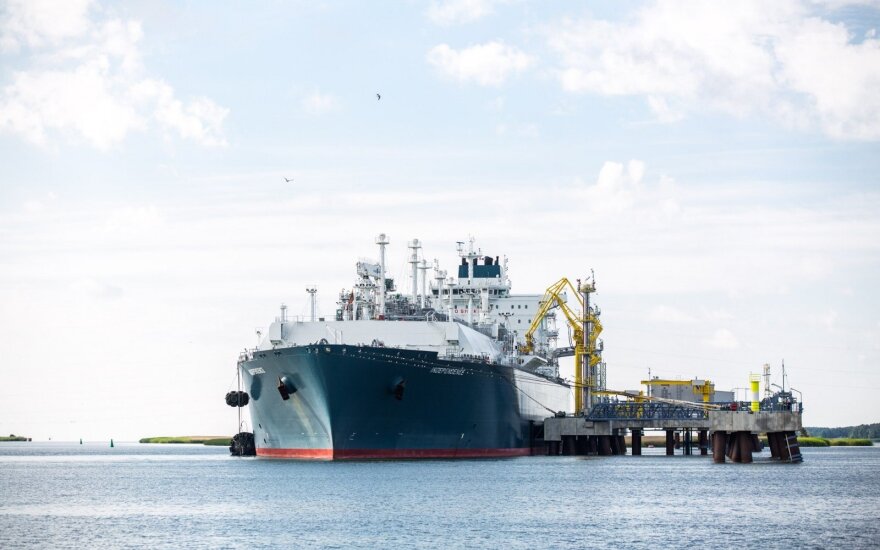 Linas Sabaliauskas, CEO of Achemos Grupė, which pays around a fourth of the terminal's maintenance costs, has doubts as to how much the LNG terminal has actually contributed to a decline in gas prices in Lithuania, saying that not all of the goals set for the project have been reached.

"It's probably impossible to say unambiguously if the FSRU had an impact on gas prices in Lithuania. There are many components at play here," Sabaliauskas said at a discussion on ensuring long-term LNG supplies hosted by the Seimas on Monday.

"The goal was to avoid dependence on the sole supplier and (to avoid) unregulated gas prices and energy dependence. The result is that energy independence has been achieved, but we say that gas prices remain high," he said.

Sabaliauskas thinks that a separate line should be created in the state budget to finance "strategic and security facilities".

Juozas Augutis, head of the Energy Security Research Centre, says that a decision to stop using the terminal after the FSRU lease contract ends would mean a step backwards.

"We can't even think about halting (the terminal) or selling the vessel. If we lost the terminal, we'd go back to the position we were in," he said.

Saulius Bilys, CEO of Lithuania's natural gas transmission system operator Amber Grid, says that gas consumption is on the decline, but the role of gas is changing, for example, in energy.

"We see a decrease in gas consumption. It has stabilized in Lithuania and is stable in Latvia, too, depending on the weather. Things are more or less stable in Estonia. (...) The main reason is falling consumption in the energy sector. (...) The gas sector is already playing a new role now as a balancing and price-fixing sector for the electricity sector. Gas will become an integral part of green energy," he said during the discussion.

Looking ahead, purchasing the FSRU could bring more benefits than its continued lease, the CEO said.

"The acquisition of the vessel would give Lithuania more flexibility about its use. The vessel could as well serve as a cargo ship in case there's no need for importing gas from the global market," Jusius said.

"If the situation changed so that the value created by the terminal were lower than its maintained costs, it could be sold," he added.

A study by the international consultancy Poyry Management Consulting has found that Lithuania would benefit most from purchasing the FSRU, named Independence, after expiry of the lease contract with Norway's Hoegh LNG in 2024.

The country would receive a somewhat lower benefit if it extended the lease for another 20 years.

Estimates of the FSRU purchase price range between 121 million and 160 million euros, but the exact price set in the contract with the Norwegian company is confidential.

After 2024 “Independence” may sail away from Lithuania

Discussions in the European Union on further opening up its market to American liquefied natural gas...

Lithuania is likely to purchase the Klaipėda LNG terminal's floating storage and regasification...