Awarded with the title of the Business Ambassador 2014 at the Lithuanian Business Confederation Awards, Egidijus Meilūnas, the Ambassador of Lithuania in Japan, states that tourism is one of the most promising areas for developing relationship between Lithuania and Japan. 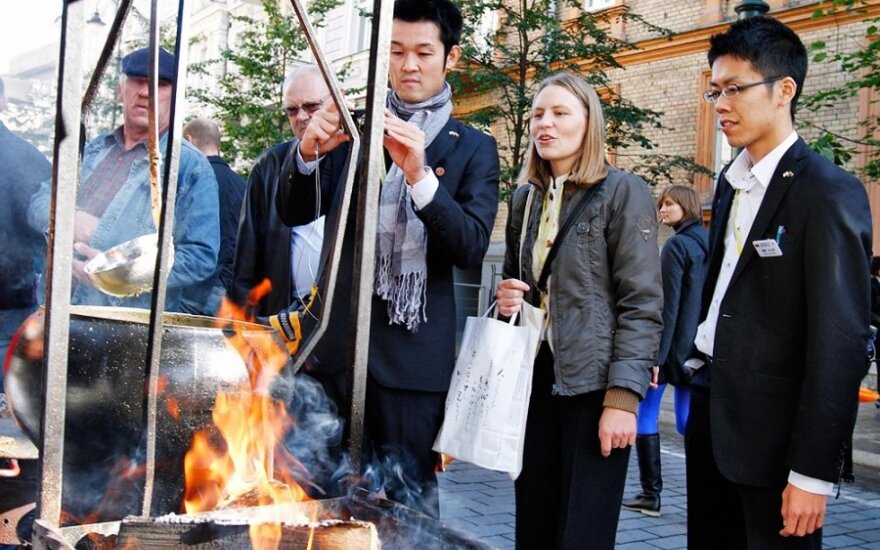 "I am convinced that Lithuania can offer Japanese tourists what other Baltic countries cannot: the heritage of the highly-valued Chiune Sugihara and the strong Lithuanian connection with nature. In Lithuania, the Japanese feel at home and one of the reasons for this is, in my opinion, the long-cherished Lithuanian paganism, which is quite close to the Japanese due to its similarities with Shinto – one of the major religions in Japan," said Meilūnas at a meeting with Jurgita Kazlauskienė, head of the State Tourism Department, last Thursday.

He also gladly mentioned the annual tours of Japanese journalists in Lithuania, organised by the department together with the Embassy of Lithuania in Japan. Last year, Lithuania was visited by Japanese traveller and culinary chef Asami Kuchio, who prepared and published a detailed and richly-illustrated book on travels around Lithuania, My Favourite Lithuania. The 144-page book, written by Asami Kuchio, contains her impressions about travelling in Lithuania, where she was mesmerized by the beauty of nature, Lithuanian reverence for historical heritage and traditions.

The richly-illustrated publication presents the most interesting locations in Lithuania, its cultural heritage, traditions and customs. The book also presents traditional Lithuanian cuisine and several recipes.

Jurgita Kazlauskienė of the State Tourism Department is happy that such a detailed book about Lithuanian has been published in Japanese, the first of its kind. "I believe that this excellent publication will encourage more Japanese come visit Lithuania," she said.

Last year, Lithuania was visited by journalists of the Skywards magazine, owned by the Japanese JAL airlines. The newest issue of Skywards magazine, which has a circulation of more than 3 million copies, contains an article about places to visit in Lithuania, as well as a novel dedicated to our country, written by Asado, one of the most famous contemporary Japanese writers. The magazine presents a particularly fond opinion about the beauty of the Curonian Spit, where Asado was able to walk on the paths of Thomas Mann, the German writer who is particularly popular in Japan.

The State Tourism Department and the Embassy of Lithuania in Japan is inviting this summer the creative team of the particularly popular Ku-nel lifestyle magazine to visit Lithuania this summer.

Japan is the fastest-growing market of Lithuania's incoming tourism from Asia. In 2014, Lithuanian accommodation establishments accepted 14,500 Japanese tourists, 44.1 percent more than in 2013.

It is a rare event to have 50 princesses visit the Lithuanian Embassy all at once, but the annual...

After opening the Embassy of Israel in Vilnius, joining the euro zone and being chosen by the Lonely...

Lithuanians discovering tourism in their own country

Last year, almost each Lithuanian at least once was touring in Lithuania - during 2014 a total of 2.6...

What made Lithuania the new darling of international tourism? (3)

Lithuania has recently received much attention in the international press: it has been named among top...