Ludo Segers | the Lithuania Tribune
aA
One of Europe's most successful economic powerhouses, Flanders, opened a representative office in Vilnius. It was a festive celebration and brought one hundred guests to the new location of Flanders Investment & Trade (FIT) office on Gedimino Prospektas in the heart of the Lithuanian capital.
Sekite svarbiausias naujienas socialiniuose tinkluose! 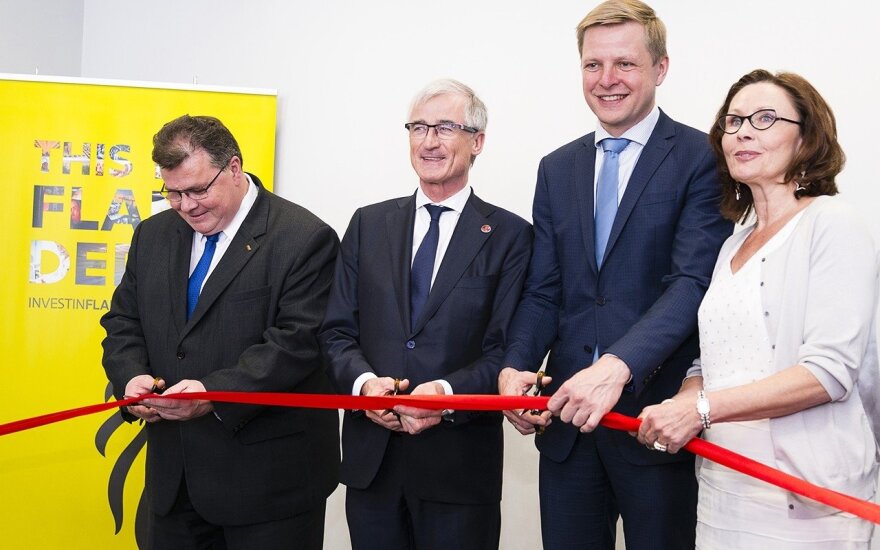 Claire Tillekaerts, CEO of FIT proudly announced that this office completed the organisations representations in northern Europe and expressed the hope that it will lead to more business between Lithuania, the Baltic States and Flanders.

She said: “In order to be able to respond rapidly to a changing economic reality, Flanders Investment and Trade annually takes a closer look at its network of offices. The Vilnius office is part of that strategic analysis to support Flemish companies and those seeking to establish a physical presence in Flanders.”

Minister-President, Geert Bourgeois, was clearly delighted with the warm Lithuanian welcome. He said, “by opening a Flanders Investment and Trade office in Vilnius for the Baltic states, Flanders sends out a clear message on the growing importance of the region for the Flemish economy."

He said that his region is dependent on exports and he added that Flanders exports substantially more per capita than Germany. He continued, "as a result of their strategic position at the Baltic Sea, the various seaports play an important role for the Flemish ports. Moreover, the region presents itself as an economic gateway to other countries in North East Europe.”

Foreign Minister Linas Linkevičius, having been the NATO ambassador based in Belgium, knows Flanders well. The minister said: “Opening of Flanders Investment & Trade office for the Baltic States in Vilnius signifies more opportunities for our business, scientists, researchers, and students. It also shows appreciation for the economic potential that foreign investors find here, in Lithuania.“

He was particularly pleased with a number of significant steps taken during this trip and added: “Today, Lithuania and Flanders signed four memoranda to promote cooperation among our seaports and universities, and in the field of life sciences. Lithuania‘s life sciences sector is one of the most advanced in Central and Eastern Europe. We hope to see Flemish scientists and entrepreneurs in Life Sciences Baltic forum in Vilnius this September.“

The Vilnius mayor, Remigijus Šimašius, welcomed Thomas Castrel, FIT's representative in Vilnius back 'home'. Thomas lived in Vilnius for a number of years and now returns in a new capacity to promote trade, investment and co-operations between Flanders and Lithuania.

From the Vilnius office, this representation will service the entire Baltic region. Flanders considers the Baltic States to be of strategic importance and wants to send out a strong signal about future business. Flanders and Lithuania have been working together for 20 years and there have been a number of celebrations to underscore the productive relationship between the Belgian region and Lithuania.

After the traditional ribbon cutting, the guest were invited to a reception. The Lithuania Tribune spoke with Minister-President Geert Bourgeois afterwards in an interview focusing on a number of areas of cooperation will be published later this week.

Europe must learn from its mistakes and integrate refugees according to the principles of the...