Kaunas citizen Gediminas Nemanis turned his electric bike gear “Rubbee” into one of the most successful startups in Lithuania. An excellent debut on the crowd-funding platform “Kickstarter”, a team of enthusiasts and attracted investors allowed the invention to make its way to success and gained recognition on the global electric bike market. Gediminas, the inventor and “Rubbee” project developer, tells us how the idea of “Rubbee” was born, how it developed and how it looks now. He also talks about the ecosystem of the startups and the road from the idea to the success story, Kaunas In reported in a press release, Kaunas In wrote in a press release. 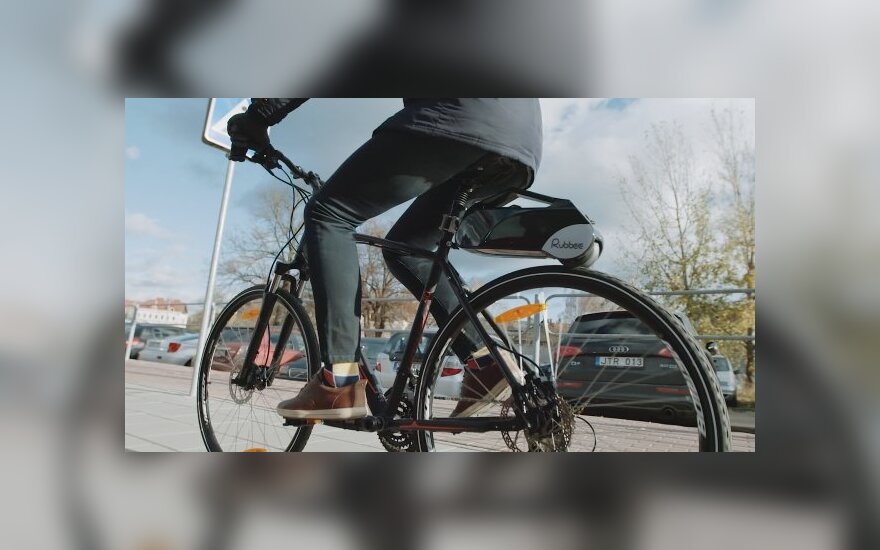 The prehistory of the electric gear "Rubbee" dates back to 2012, when Gediminas, who was interested in electric bikes and already managed to cut all the bicycles in his house, had decided to secretly upgrade his sister's bike. He intended to do it so that the sister does not notice anything. Consequently, the electric drive had to be installed and detached without changing the bicycle structure.

"That's how I created and built the first prototype of the system that weighed 16 kilograms, and you had to use both hands to install it on the bike," the inventor recalls.

From the perspective of today, the system was incompact and complicated, the bicycle could go only about 3 kilometres with it. But the most important thing, according to Gediminas, was something else: that first gawky device proved that the principle of his invention was working, that it is possible to turn any bike into an electric motor without the use of additional tools and wires but simply by having such a universal plug-in system. 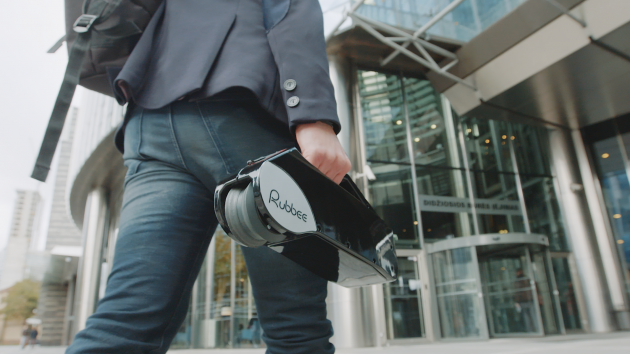 After constructing the first prototype, Gediminas took part in one of the events in university and did not even doubt that he would gain immediate recognition and ovations, but... he remained unnoticed!

"Everything turned upside-down after taking part in the opening ceremony of the Kaunas Tourism Centre: I arrived with the bike which had the electric gear and the press was extremely interested. For the first time in a publicity, I used the opportunity to present my invention to the entire Lithuania, from television to blogs, before numerous cameras, photographers and curious journalists. And then it started..." Gediminas remembers his five-year-old story.

From the prototype to the product

This is where the second stage began: selling my business idea. The idea had to move "out of the garage" into the drafts of manufacturers and consumers' homes.

"The search for business angels began, and the companies themselves began to contact me and offer partnerships. After traveling around Lithuania and looking around, I decided to cooperate with the innovative company "Elinta" based in Kaunas FEZ, because it had the largest technological base, the largest amount of human resources and it offered sources of financing."

After a year of work, Gediminas and his constantly growing team have decided to offer improved prototypes on the "crowd-funding" platform "Kickstarter". 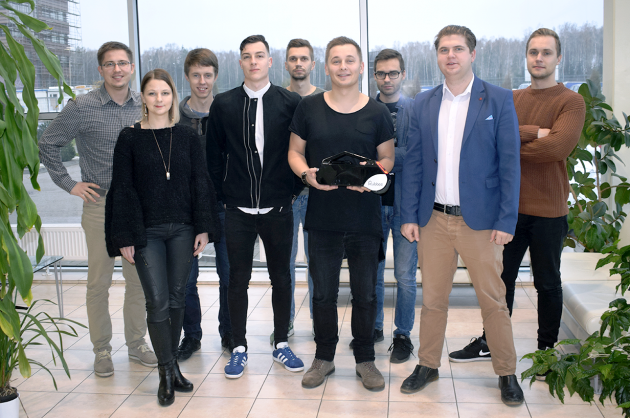 "We, as the unknown company from the not very well-known country of Lithuania, have been incredibly successful. It is interesting that we started the crowd-funding only having the prototypes of the product - not yet sure how it will be manufactured and how things will go on. When we realized that the product was interesting for the world, we started thinking about the manufacturing of the new "Rubbee". In fact, the construction of one or two prototypes is a child's play compared with the transition to the mass production, where we have to apply completely different laws and different processes."

Ambiguous "crowd funding" and floundering from the Valley of Death

It is often said that "Kickstarter" is a great market research, but Gediminas gives a warning: the results of this study may be false. The interest and the flow of people reaching the inventors from this platform are statistically several times higher than after the end of the "Kickstarter" campaign. "Rubbee" manufacturers were also deluded: having the dreams of popularity, they believed that it was worthwhile to fully equip the warehouse with the new product which will be swept away by enthusiastic customers.

"It turned out that it is much more complicated to make sales in the real world, rather than on the startup platform. We stepped into the so-called "valley of death" – in the startup world this is a stage where the company already has some circulation, but the figures are not promising, because the quantities of the produced product are small, the cost is huge, and margins are very small. That is the worst moment: you need money the most, but you do not look attractive to the investors at all. In such "valley of death" most startups that create devices or equipment fail," Gediminas remembers a difficult period.

However, these Kaunas citizens did not give up: they sold out "Rubbees" that were left in the warehouses and found the investors - the Polish Risk Capital Fund, whose investment allowed the development of a product adapted for large volumes of production: requiring less manual labour, less components and which is lighter and cheaper.

In September 2017, the latest "Rubbee" was presented at the world's largest bike industry exhibition "Eurobike" and it was a huge success. Currently, the latest version of "Rubbee" is already delivered and collects customer funds in the second "Kickstarter" project.

Today "Rubbee" project employs a team of around fifteen people, with a core of six engineers.

"We have mechanics, electronics, programmers, in short, the geeks who create the product. I gave the responsibility of the technical stuff to my team, and my responsibility is product development, investment search, building partnerships and customer support.

What is more, I have to consult the other startups: people ask questions about "Kickstarter", a search for investors, product development, they are interested in how to organize teams, etc. It can be said that I have absorbed all the information from the environment and now I share it with the Lithuanian startup ecosystem," says "Rubbee" inventor.

Are there many startups in Lithuania? According to Gediminas - an incredible number. Of course, not all of them are going to succeed.

"It will be good, if at least one out of then will succeed. Often, the success is achieved not with the first, not even with the second, but with some other "startup". I often have to let down the optimists and say that, unfortunately, your idea will not work in our world or it will be hard to sell it, or it has some technical issues that cannot be resolved at this moment."

According to Gediminas, the main thing in this case is not to stop and come up with new ideas.

"I have to warn those young people who see the startup ecosystem through the rose-coloured glasses, who think it is enough to come up with a good idea, and everything after that goes smoothly. If you have the idea only in your head – it is worthless. Success is hiding in the details and in the implementation of the idea. And this implementation takes a lot more time, resources and effort than you expect. There are thousands of reasons WHY your project will fail, thousands of problems that will stop you," warns the founder of a successful startup "Rubbee".

The best jobs are in Kaunas

Gediminas, who was born, grew up and studied in Kaunas, brings the investors to his home town and claims that here we have plenty of people and knowledge for the main ideas and business development.

"Even more: even as the company grows, the "brains" of our company remains in Kaunas - creative, technical processes and business development are taking place here, in my hometown. We bring lower value-added, simpler technological processes abroad. We have a wide network of partners who already know Kaunas very well, because they visited us more than once. In other words, the best jobs remain in Kaunas, while simpler things are ordered and produced abroad."

From Kaunas to all over the world

Is "Rubbee" interesting for the Lithuanian market? Gediminas says that although at first the interest of Lithuanians was minimal - only a few of these devices were sold in our country, but recently the interest started to grow.

"Perhaps this is also affected by the price of the device: the first "Rubbee" cost over 1,000 euros, today it costs only 300 euros. On the other hand, in Lithuania, the bicycle system is still too small for us to be appealing in this market. A typical Lithuanian cyclist uses this instrument for recreational purposes - for sports and leisure. And our invention is more relevant to those for whom the bike is primarily a daily means of transportation. That is why Germany is the country with the most potential for our product. Because here almost half of the electric bicycles in the European Union are bought. It is a well-educated market with excellent technology, able to compare products, making it easy to "steal" customers from well-known brands, bringing them a smarter, more attractive and better product."

Now, the main objective of "Rubbee" team is to fill the entire Europe with its products during the bike season - so that they can reach the shelves of all major stores and be accessible to all customers.

"At the end of 2018, we would like to move to non-seasonal markets - North America and Australia," the team leader shares their ambitious plans.

"Rubbee" is an electric gear which can be installed on the bike in one second using only one hand.

Driving distance: up to 48 km

Kaunas University of Technology (KTU) has extended the deadline for applications to become its next...