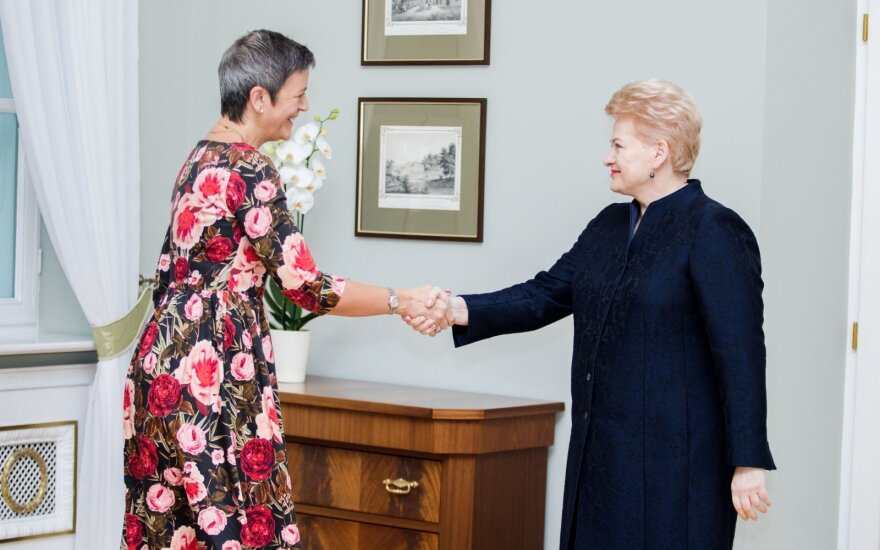 Last week, Vestager said that Lietuvos Geležinkeliai (Lithuanian Railways, LG) had breached competition rules and would have to pay a fine of nearly 28 million euros.

Grybauskaitė expressed hope that the EC would stick to its principles in connection large companies, for instance, Russia's Gazprom, the presidential press service reported.

"The president asked the European Commission to seek compensation of financial losses for countries affected by the Gazprom monopoly, including Lithuania, as well as to make sure that gas prices based on fair competition and reflecting the actual market situation are applied in the future," the Lithuanian President's Office said.

The meeting also addressed the EC fine on Lietuvos Geležinkeliai, which, in Grybauskaitė's words, could undermine Lithuania's image.

Another item on the agenda was the Nord Stream 2 gas pipeline project, which the Lithuanian president described as running counter to the European Union law and making the continent more dependent on Gazprom. Furthermore, Grybauskaite and Vestager talked about the Astravyets nuclear power plant under construction in Belarus close to Lithuania's border and synchronization of Baltic electricity networks with continental Europe.

EC is probing Gazprom's abuse of its domination on the Central and Eastern European market in the 2004-2012 period.

A four-year-old dispute between the Lithuanian government and Russia's gas concern Gazprom over 1.4 billion euros sought by Lithuania at Stockholm arbitration court over overcharging for gas supplies has ended in failure.

Margrethe Vestager is meeting with Lithuanian leaders in Vilnius on Tuesday to discuss the fine of...

After European Commissioner Margrethe Vestage r stated that Lithuania could have avoided the...