EN.DELFI
Lithuanian economic growth exceeds the regional average, but local and international experts are in agreement that to keep it or even increase there is a need for new engines of growth. Digital economy in Lithuania offers such an opportunity. 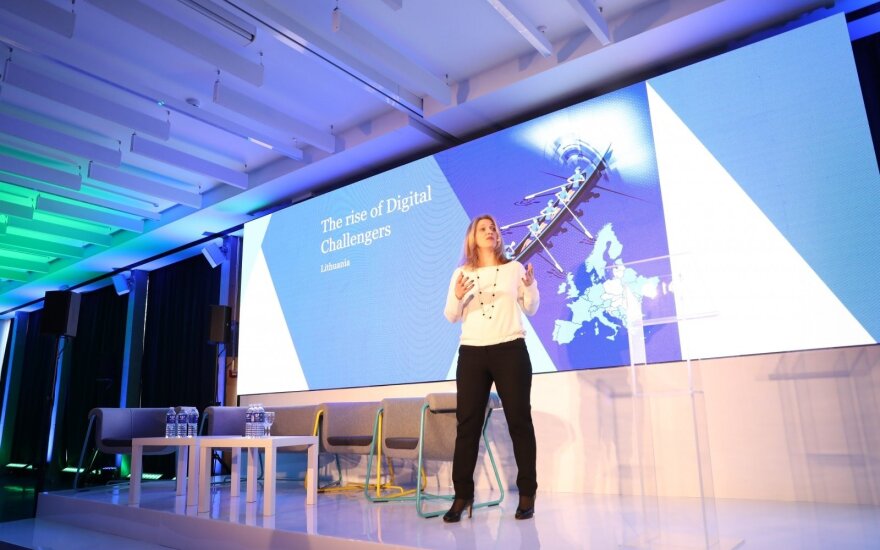 On Tuesday international management consulting firm „McKinsey & Company" presented its report "The Rise of Digital Challengers: how digitization can become the next growth engine for Central and Eastern Europe" in "Vilnius Tech Park", the largest ICT startup hub in the Baltic States.

During the event „McKinsey & Company" introduced its latest data and perspective for Lithuanian digital economy and its position as compared with other CEE and Digital Frontrunners in the Northern Europe.

According to the report, closing the digital gap to Western and Northern Europe, Lithuania could earn up to EUR 8,8 billion in additional GDP by 2025 or the equivalent of extra 1,5 percent point on GDP growth each year over this period.

Marcin Purta, a partner at McKinsey & Company and the lead author of the report, says that Lithuania has excellent foundations to capture the opportunities offered by digital economy and to catch up with Digital Frontrunners from the Northern Europe, including Estonia.

"The countries of CEE will only be able to capture the full potential of digital transformation by cooperating closely with each other. Lithuania has strong foundations in several dimensions, e. g. high quality digital infrastructure and a larger pool of STEM graduates", said Marcin Purta of McKinsey.

M. Purta underlined that regardless of the fact that GDP per capita growth in Lithuania reached 136 percent in the period between 1996-2017, the Lithuanian economy will need to find new sources of economic growth. According to McKinsey's analysis, digital economy could drive sustained growth for the country.

Vice-minister for the Economy and Innovation Jekaterina Rojaka presented government's position regarding digital economy and said that digital economy is having an increasing impact and sometimes fundamentally transforms some parts of the economy that were previously considered not digital.

"If we tried to analyze it separately, digital economy grows a couple times faster than other sectors of the economy, even though there is not a universal methodology to measure it. Therefore, we must develop not only research projects, which would allow us to estimate the scale of digital economy and its impact on economic indices. We also need to talk about guiding respective policy-making and its adaptability to the new digital reality and the opportunities it provides", said vice-minister Rojaka.

In the panel discussion, which was taking place after the presentation of the report, experts were discussing ways to fast-track digitization in Lithuanian private and public sectors.

"Google" country manager for the Baltics Vytautas Kubilius said that despite the excellent Lithuanian digital infrastructure a more active digital literacy training is needed to take the best out of it.

"It's clear that with the talent and resources already in place, coupled with a focused and collaborative approach, the digital economy can be the next major strategic growth driver for Lithuania. We want to be part of this journey in supporting Lithuania on its path as Digital Challenger. We are committed to continue investment in skills of the future and supporting the Lithuanian companies, through our programmes and trainings to help people grow their skills, careers or businesses", said V. Kubilius.

Meanwhile, the moderator of the discussion and director of "Infobalt" association Paulius Vertelka highlighted the fact that the scale of digital economy is constantly expanding, making it increasingly difficult to separate it from the economy in general.

"It is imperative to have digital economy policy on a national level and to search opportunities for cooperation between countries in the region. Together achieving goals, focusing on finding the right solutions, improving the skills of employees and consumers, promoting the digitalisation of processes, especially in small businesses, can help to achieve greater efficiency and competitiveness. This way we could reduce digital exclusion and create greater prosperity for all of us: business, state and citizens", said director of INFOBALT Paulius Vertelka.

The LBChain project has garnered significant attention among European FinTech companies: with 21...

Factris, the Amsterdam-based provider of factoring services has merged its operations with Lithuanian...

2018 was another hugely successful year for Fintech in Lithuania and saw the country cement its...