BNS
aA
Margrethe Vestager is meeting with Lithuanian leaders in Vilnius on Tuesday to discuss the fine of almost 28 million euros on Lietuvos Geležinkeliai (Lithuanian Railways, or LG) for dismantling a railway stretch to Latvia. 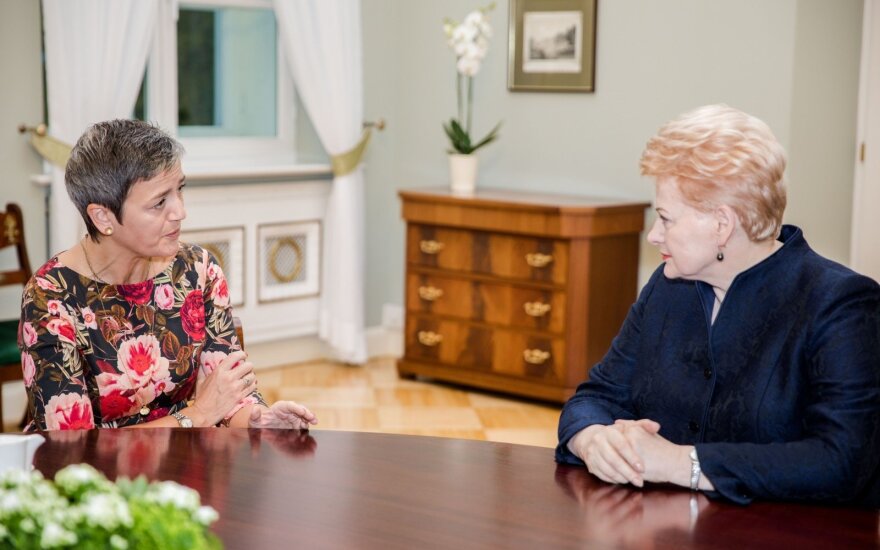 Vestager, a Danish politician, said last week that the Lithuanian state railway company had hindered competition by dismantling a rail track from Mažeikiai, in the northwestern part of the country, to Renge, in Latvia, in 2008.

Lithuania was also instructed to mend the violation – rebuild the railway or take other steps to restore competition.

Will Try to Annul the Fine?

European Commission officials have earlier urged Lietuvos Geležinkeliai to separate its operations as an effort to ensure competition.

In May of 2016, Lithuania's president urged the government to take immediate decisions on major restructuring in the state-run company, saying this could help avoid the fine.

"The company must be efficient, however, it is up to the government, which owns 100 percent of the company's shares, to decide the specific method of restructuring," the presidential press service told BNS.

The prime minister, Skvernelis, noted the Cabinet would search for ways to reduce or annul the fine, however, has not yet specified whether a claim would be filed with the Court of Justice of the European Union.

"We are currently analyzing the European Commission's decision. If we see legal grounds, we will seek to reduce the fine or annul it. At the same time, I want to emphasize that member-states should respect the EU law and comply to it. Lithuania is no exception here," he said in a comment to BNS.

The European Commission established that the dismantled rails caused damage to Poland's Orlen concern, which operates an oil refinery in Mazeikiai and the Butinge terminal, as it is now forced to transport its freight to Latvia on a far longer route.

Lithuanian officials object the violation, maintaining that the 19-km stretch was removed in 2008 for safety reasons and did not cause major impact on transport flows.

If Lithuania admitted the violation or suffered a final defeat in court, Latvian railways and Orlen could turn to court for compensation of damages.

Deividas Matulionis, adviser to the prime minister, told BNS that the meeting with Vestager would also address the EC inquiry into Russian gas concern Gazprom's abuse of its monopoly in Central and Eastern Europe.

In March, Gazprom pledged to the European Commission to allow countries to freely trade Russian gas and to supply them at a competitive price, however, Lithuania's government demand that the Russian concern should cover the damages. Latvia, Estonia, Poland and Bulgaria also call for stricter sanctions against Gazprom.