EN.DELFI
aA
Blockchain industry leaders should start investing more in Research and Development (R&D) instead of Public Relations campaigns. There have been too many actors in the industry who made a good broth bad; a broth which now has to be consumed by all, including those com-panies and start-ups who have something dynamic to offer both small and large businesses.
Sekite svarbiausias naujienas socialiniuose tinkluose! 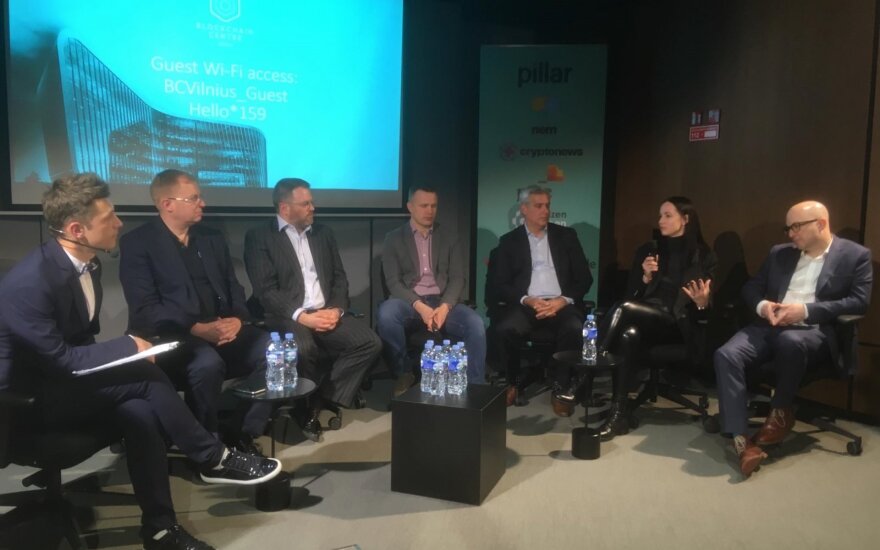 Ultimately, the blockchain community should pay more attention to educating traditional industries and corporations. Despite a rocky ride in 2018, there are a lot of great blockchain projects already delivering tangible results; the problem is they got buried during the crypto bubble plunge last year and needed to be removed. Such were the ideas delivered at a panel discussion at a blockchain conference at the Blockchain Centre Vilnius on January 23.

Large companies found it difficult to move quickly enough. As we found out about the internet, however, if you don't move quickly enough, digital disruptors like start-ups will emerge and eat their lunch, so to speak. Richard Maaghul, CEO of ODEM.io is unequivocally convinced this will happen. Large companies are still trying to figure out how to enable this rather old technology — blockchain has been around for a while — where they can create the new revenue lines. Those companies are still only educating themselves. Maaghul emphasises: 'what I want to get across to the people in these industries: do not believe everything you hear. Yes, there is hype and it was a hype around the crypto currency; but it is settling down, lots of those bad actors are gone, and there a lot of good companies out there building some amazing applications. So, don't believe in the negative hype either!'

Greg Chew, a co-founder of QPQ Limited, is convinced that the biggest problem so far was that vast amount of applications were solutions that went looking for problems but didn't actually solve the real commercial issues. Chew asked: 'Too many of them are marketing wizards. Look at the large trade finance platforms, look at what their invested in them, and tell me how much of their investments were dedicated to research and development, and how much to marketing?'

According to Chew, people need to realise that those who invested are the exact same people putting the exact same amount of money into exactly the same platforms. 'Was that into marketing or R&D?' Chew asked. He sees it as a big problem, because there are shareholders who do not really understand how blockchain works, much less asking what is being done about such issues. They get an answer telling them they have managed to invest in a blockchain platform that is really great and looks good on the news. As to what tangible results have been achieved, however, they are told: 'Don't ask me! God only knows how!' this is an answer.

Mr Chew is convinced: 'There are some really good ideas and applications coming up, so we need to speak up louder, clearer, and with more faith. With tokenization and cryptography, all these elements, we have an ability to elevate economic opportunities for everybody... But right now, too many bad actors have spoiled the broth. Consequently, when you approach big companies to talk about blockchain, all they see is a salesman with loudspeakers talking about bitcoin. These people don't really understand blockchain. They're promoting an idea of blockchain which doesn't reflect the reality on the ground.' It is thus very difficult for companies potentially interested in blockchain to get a real picture of what blockchain is, and what it can do.

Managing Associate at CEE Attorneys, Monika Kriūnaitė, is convinced that at the end of the day, every business is looking to a business model that is efficient and makes a profit. Whilst not all businesses need to use blockchain technology to achieve those goals, Kriūnaitė said during the panel discussion: 'Now you need to look into this technology deeper and try to understand if blockchain is mature enough to bring real gains to businesses.'

She is also convinced there is a need to regain consumer trust. In particular, from those who still have money to invest? Moreover, now is a very good time to invest in educating businesses that blockchain is an application platform and, in fact, not the same as bitcoin. There's a lot of discussion about protecting one's personal data, but not enough people are aware that blockchain is potentially the best solution to this problem. This goes for medical records and financial transactions, to name a few.

All panellists agreed that the market had cleansed itself after the ICO bubble burst and as a result we can see an increase of interest in blockchain by large companies and VCs. Some time is needed for the blockchain technology to gain importance in those businesses, but all signs are indicating that we are on the right path.

Kriūnaitė ultimately concluded, however, that the biggest challenge for blockchain is gaining consumer trust.

In two settlement decisions, the European Commission has fined five banks for taking part in two...