Blockchain Centre Vilnius to be headed by Justas Šireika

EN.DELFI
aA
Technology companies from 14 countries around the world, including Australia, China, Canada, Switzerland and others have established partnership with Blockchain Centre Vilnius (BCV), which was founded just a year ago. In an annual event hosted by the centre on January 23, blockchain technology experts from the World Trade Organisation, European Commission and Parliament, as well as Lithuanian institutions gathered to discuss the application of blockchain technology in international trade. During the event, Justas Šireika was introduced: he will be taking charge of the BCV, as well as a new start-up financing fund, according to a Blockchain Centre Vilnius press release. 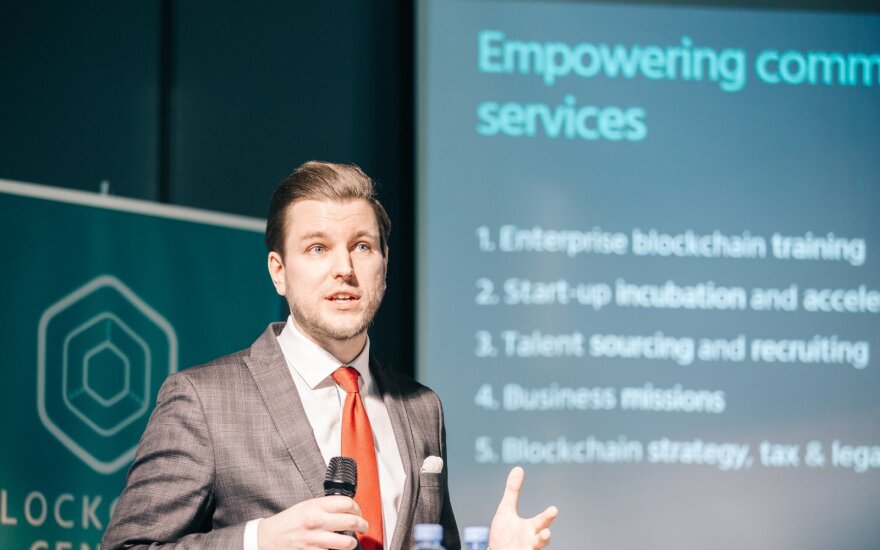 The BCV, which was founded in Vilnius a year ago created a strategically important triangle of such centres with Australia and China, declaring ambitions to carry the flag of Vilnius as the European blockchain capital.

Related articles
How blockchain technology will change the world trade?
Lithuanian start-ups attracted EUR 70 million in investments in 2018, further breakthrough will be determined by environment improvement

"The Blockchain Centre Vilnius has become a centre of gravity for potential investors and start-ups. Lithuania has become a bridge for these technologies into Europe and from the world – into the world. With the mediation of BCV, the World Economic Forum has included Klaipėda Port alongside the ports of Los Angeles and Rotterdam into a pilot project on the use of blockchain in logistics. In consideration of our work experience, the European Commission has invited BCV to become a founding member of the European Association of Trusted Blockchain Applications together with such world high tech giants such as IOTA, Airbus, Philips, SAP and many others," BCV head Eglė Nemeikštytė highlighted in an annual report on the non-profit organisation.

In presenting his vision, Justas Šireikia emphasised that the main goal is to not yield positions and maintain leadership in Europe. "To the international tech community, Lithuania is known as an open country, the Centre already has recognition and there are very high expectations for us. We feel the demand for specialised business missions, leadership training, blockchain and artificial intelligence start-up mentorship. These will be priority areas," J. Šireika says.

In 2018, the BCV helped attract 5 million euro of investment, hosted delegations from 40 states, organised more than 70 education events of various formats. Where over 170 tech experts, business and political representatives, investors shared their experience. They were listened to by a total of 6850 participants.

"The BCV has become a regional leader of not only blockchain, but also new technologies. Here, ideas are born, contacts established and leaders meet. We, the founders of BCV and its board have from the start seen an opportunity to become the incubator and accelerator of young, innovation-based business. In our second year of operation, we aim for the most prospective start-ups in the region to settle themselves and grow stronger here. Thus, we are establishing an early stage start-up financing instrument, the Distributed Intelligence Fund. Together with the BCV team, we will help blockchain and artificial intelligence development businesses enter new, international waters," BCV board chairman Paulius Kunčinas spoke of the project's vision during the BCV first birthday conference.

The conference hosted a World Trade Organisation representative, who is directly responsible for the application of new technologies in international trade. According to the organisers, this is a strategically important topic for Lithuania because Lithuanian businesses are already seeking working prototypes.

One of the heads of the European Commission's Startup and Innovation Department Helen Köpman, Lithuanian Minister of Finance Vilius Šapoka, Bank of Lithuania board member Marius Jurgilas, senior analyst for the World Trade Organisation Emmanuelle Ganne and former Estonian Prime Minister Taavi Rõivas also shared their insights. The event was attended by more than 150 guests: business, technology and innovation professionals.

How blockchain technology will change the world trade?

The field of research of World Trade Organisation chief analyst Emmanuelle Ganne is the application of...

With solutions based on distributed ledge technology and blockchain rapidly gaining popularity, the...

Blockchain will transform digital services and Europe. It is acknowledged that Europe missed out on...

Today, 03th of October, European Parliament voted in favour of the motion for a resolution on...