EN.DELFI
aA
“Baltic Salary Survey”, a compensation research company in Lithuania, yesterday for the first time unveiled which companies are paying the most equal wages to their employees, at the “Equal Pay 2018” awards. The winners were announced based on remuneration survey conducted this year, in which 150 organizations from all over Lithuania participated, a press release from Baltic Salary Survey states.
Sekite svarbiausias naujienas socialiniuose tinkluose! 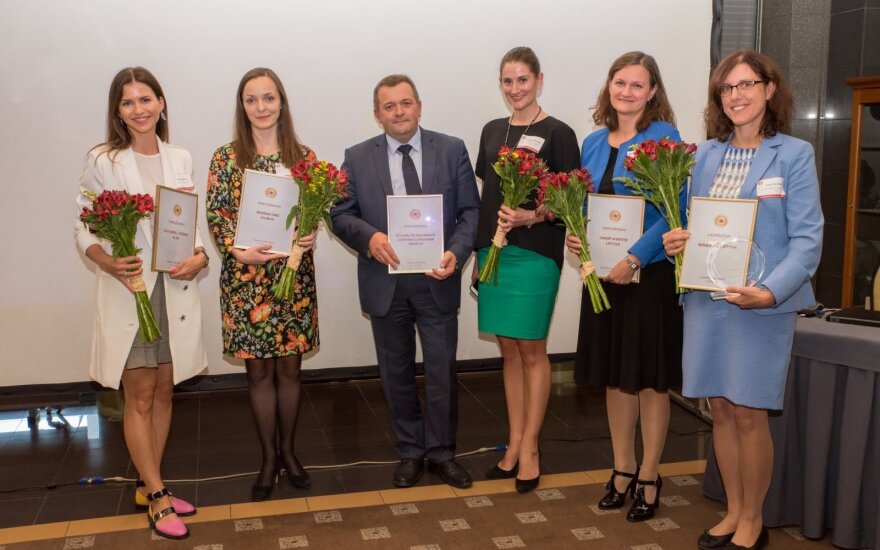 The five fairest paying companies operating in the country were selected and awarded.

"The issue of equal pay is more and more often discussed by the businesses and employees in Lithuania and the rest of the world. Professionals feel valued when paid fairly and given equal opportunities to reach career goals. Companies know that, so, by paying fairly they are more likely to attract experienced professionals and new talents, thus improving their odds in the competitive market. From the perspective of the organization, the "Equal Pay" Award is a proof that employees in such companies are rewarded on the basis of their responsibilities, competences and results, but not by gender, - says Ieva Pecukevičiūtė, a representative of the "Baltic Salary Survey" company, which is organizing the remuneration surveys in the Baltic States. - Congratulations to the winning organizations for choosing to go on a promising path of equal pay. "

Ingrida Žumbakienė the Head of Personnel at "Mondelez Lietuva Production", the winner of the first place, says that professionalism, competences and values are the main criteria in the organization.

"Receiving such an award is, without a doubt, an honor. We are very glad that our company has been noticed and our efforts to create an open and fair-opportunity driven culture are showing results. On the other hand, it's a shame that this is still something that needs to be talked about it. Modern, future-oriented businesses cannot remain strangled by the stereotypes of the past. Improvement and the ability to use ones knowledge for the creation of the common good is the foundation of our organization's culture; we work and live by that", - says I. Žumbakienė. - "I understand that society in all areas - from politics to business – still has a long way to go until the reward, career opportunities, and possibilities of self-expression will depend only on the value positions of human competences and results displayed. Our experiences on this road, I believe, will be valuable. "

"Mondelez Lietuva Production" has secured the first position this year, with the highest overall score of 28. Paying one of the most competitive salaries in Lithuania, but still falling short of the first place by just three points was "Nasdaq". The third, fourth, and fifth places were awarded to "Sanofi-Aventis Lietuva "(21), "Švyturys - Utenos alus "(20) and "BTA Baltic Insurance Company" (19), respectively.

"This award is a significant recognition of our work promoting the diversity, engagement and equality of both genders in the labor market. We are pleased to be among the best companies that open up wide opportunities for both sexes to participate in the economy and ensure diversity, thus, we believe that, in accordance with the principles of social responsibility, we are developing the labor market on a national level and we are actively contributing to the reduction of the social exclusion in the society," - says "Nasdaq" Human Resource Management Business Partner in Lithuania Rita Čepinskienė.

"The core value in our company is the employee who is competent, loyal and motivated. Therefore, this award is very important and significant. We, as any other socially responsible company, promote a fair attitude towards employees, so the internal equality of rewards is no less important than the external competitiveness. This award shows that our chosen human resources management strategy goes in the right direction", - says Tadeusz Podvorski, Head of Branch of "BTA Baltic Insurance Company" in Lithuania.

The study conducted by the "Baltic Salary Survey" evaluated whether companies pay the same remuneration at the same positional level for both, men and women, also whether both sexes are represented in the highest positions, and, whether the remuneration paid to the employees is around the average or higher when comparing to the market.

Organizations were evaluated in a three-step analysis according to these criteria, the results were then weighed and given points which were then summed up. Unlike most equal pay studies where only the averages in aggregate are calculated, this analysis was done by splitting the data by position, thus ensuring more accurate results.

According to the Lithuanian Department of Statistics, last year the average wage gap between women and men in the country stood at 13.4 per cent. Meanwhile, the "Baltic Salary Survey" results from the annual remuneration of Lithuanian organizations concluded that men's wages are on average 10.6% higher than women. This gap shrinks even more, to only 3.4% when the salaries of the same positions are compared.

Prestigious profession, wages – not quite