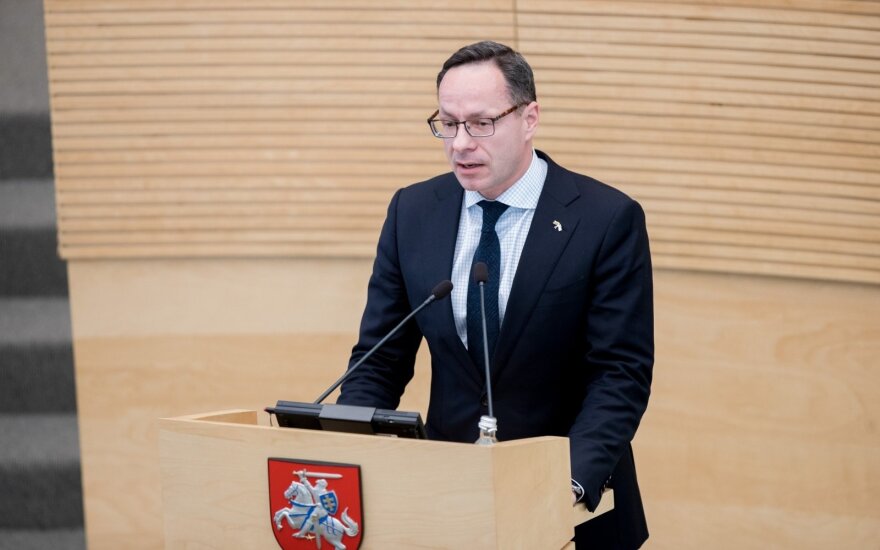 Brussels was turning a deaf ear on us for a long while. After Putin surged in Russia's politics, Lithuanians and Poles alike went to great lengths, even blocking decisions in the Council of the European Union, in an attempt to prevent the EU from compromising with the emerging regime in Russia and in order to promote zero tolerance to elimination of the remainders of democracy in the country. Only too well did we know this would end up with tanks riding on foreign soil.

We were trying long and hard to put the EU on guard against Russia's potential invasions, both in the case of Georgia and Crimea. All in vain: everyone remained deaf to our warnings. Ironically, concerns were voiced about our mental health. No longer so, quite the contrary, we are now consulted as experts on how to proceed. Time has shown that, apart from Lithuanian cures, there are simply no other ways out.

The symbolic turning point was the European Council of 23 March 2018. Not only did the majority of EU countries express their support to the UK's view that the Russian Federation was responsible for the attack, but most members of the European family also stated their unwavering support to the UK in the face of the serious common security challenge. The degree of EU's unity on the matter only matched the one demonstrated after the occupations of Georgia and Ukraine. And this is where I see a role for Lithuania: it is now time to give the West a precise recipe on how to contain Russia; the more so, since the conditional unity is very fragile and may prove to be short-lived. Lithuania's President has opened a window of opportunity. It is now up to our government and diplomats to demonstrate their skill.

By recalling ambassadors involved in activities incompatible with their diplomatic status, countries that express solidarity with the United Kingdom seek to dismantle the Russian intelligence networks across Europe, enhance security, and strengthen resilience to hostile activities. However, it is important to understand that poisoning of a spy in the UK by Novichok agent is not an isolated case and cannot be treated as such. It is not an attack against an individual. Far from being a mere cyber-attack, of which we see tens of thousands, it is a real military threat from the Kremlin. This is a proven fact. The case is an act of military aggression and should be treated as such.

The proposal made by the Lithuanian President to expel persons who have links with intelligence services as a sign of solidarity with the UK is the best method of deterrence against Moscow. When it comes to initiatives, Lithuania is, once again, in the forefront. However, even more solidarity with the United Kingdom is called for, as, normally, acts qualified as military aggression should trigger a different response. It is common knowledge that an exchange of intelligence officers or other pawns in a political game will never directly affect the interests of the criminal gangs in Kremlin. The gangs have long forgotten about the interests of the country. However, Putin's henchmen would suffer most from individual financial sanctions, such as frozen accounts or deprivation of property of unclear origin, which, in 'Londongrad' alone, it is worth USD 1.5 billion, according to preliminary estimates. In fact, this is money stolen from ordinary Russian citizens and their future. The British Minister of Defence has already announced seizures of property of arbitrary origin. Will Lithuania and other EU Member States join such an initiative? All the more worthwhile doing as, at the same time, the State Security Department of Lithuania published information that making an impact on the upcoming elections by using these and other instruments is in the Kremlin's interest.

Military aggression is yet another reminder to both our government and all members of the transatlantic family to further increase military budgets. Awareness raising and cyber warfare battlegroups need to be reinforced and further consolidated. I suppose, the first in a series of such international battlegroups could be set up in Lithuania, why not?

The energy sector, as the key breadwinner for the system under Putin's leadership, should not be forgotten, either. The statement by Chancellor Merkel on the possible construction of a liquefied natural gas (LNG) terminal in Germany offers the prospect of Berlin or Frankfurt giving more attention to the voice of Lithuania as an LNG champion, thus undermining the influence of Putin and Schroeder, patrons of the Nord Stream 2. I very much hope that a wave of solidarity will help the Lithuanian Prime Minister, in cooperation with the European Greens or other friends, to finally raise the Astravyets NPP issue at the political level, let alone speak about the problem in major cities, where this has long been due.

We need to reignite the passion for the enlargement of the EU and NATO in Berlin and other transatlantic capitals. If we fail to raise the issue, nobody will. The implementation of the association agreements with Ukraine, Georgia and Moldova must stay in focus. The Balkans are rising from oblivion already.

Russia may have guessed wrong by thinking that the EU Member States would not express real solidarity with the UK, a country on the brink of leaving the Union. However, Russia may well draw a lesson from this and our deterrence may well discourage Putin and his henchmen from further destructive behaviour. This attack shows once again that the Russian threat is evolving and taking new forms. If our response remains symbolic and reactive as usual, I have no doubt that Putin will try to meddle in our affairs further on. The Lithuanian leadership, demonstrated by the country's President on the Kremlin issue, must be followed suit.

The new chairman of the Constitutional Court of Ukraine , Stanislav Shevchuk , is visiting Vilnius...

The reaction of the Baltic states on re-election of Vladimir Putin as Russia 's president has split...