Žygimantas Pavilionis. Referendum as a pact on the future of Lithuania 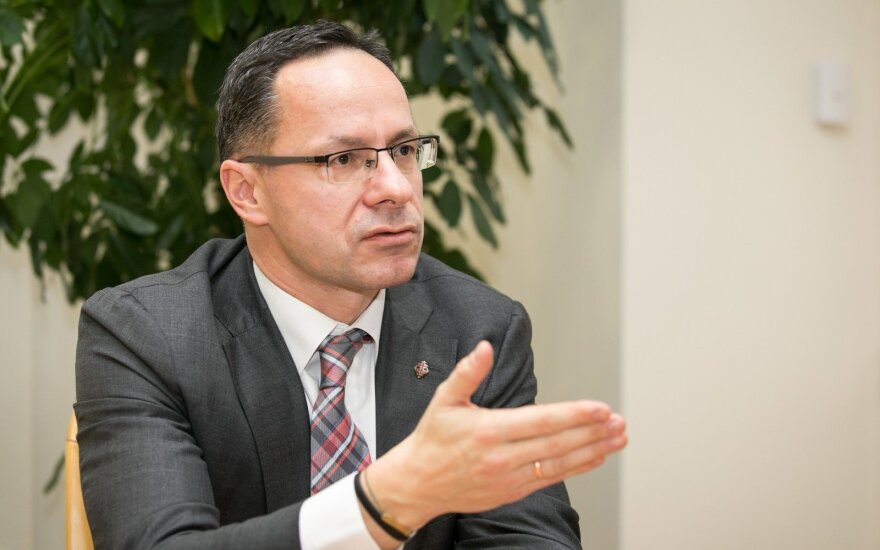 This weekend, as I was visiting St. Casimir's parish in Los Angeles, US, one of the Lithuanian sanctuaries which, in terms of time and distance, is located the farthest from Lithuania, I found myself contemplating the future and the upcoming referendum on dual citizenship.

One might wonder why Lithuanians tend to dwell on the past so much. If anything, we can live in the moment at most, but rarely do we focus on the future. Why is it so that Lithuanians fail to make all their decisions by evaluating them against a simple criterion, which is answering whether the decision will assist our survival in the next 20, 50 or 100 years? After all, survival is our strongest instinct. However, we fail to rationalise it and use it for building the future in the same way as it is being done by Israel, which has an entire ministry devoted to anticipating future events and modelling accordingly all the future decisions in the present. Israel, as we know, also has a ministry focusing on immigrant absorption, or, if you will, their return to homeland, since our historical brothers understand perfectly that their diaspora is key to building the future of their country.

In the case of Lithuania and other countries, the diaspora in exile emerged as a result of both external and internal injustice experienced by emigrants. Accordingly, those who have made the decision to come back will do everything in their power to eliminate the injustice that made them leave the country. The political deportees that had fled to the West after World War II, just like our partisans, who had fought in the forests, or our diplomats, who had sworn their oaths, did everything they could to destroy the hell's machine of the Russian invaders. The emigrants of today will likewise do everything in their power to come back to an environment where injustice, inequality, corruption or simply elitist nomenclature, which have all previously existed, are eradicated.

Therefore, more active engagement of hundreds of thousands of Lithuanians living in the UK, the US, Norway, Denmark, Sweden, Finland, Ireland and other countries would create a massive potential for the process of building the future of Lithuania that is fairer, more Western-oriented and more competitive and exhibits greater solidarity and strength. Those who refuse holding a referendum or engaging Lithuanians from across the world in the process of building Lithuania's future are essentially in favour of living in the moment and bringing the old days back. The world is inexorably moving forward, making Lithuania shrink and die out naturally because the country is stuck in the past and does not invest in its future.

Our voting in the upcoming referendum has to basically stand for a symbolical pact on the future of Lithuania, the signatures of which would be represented by the votes of those patriots that would turn up on the voting day to support retention of Lithuanian citizenship. I also proposed the idea of such a pact to the numerous Lithuanians who gathered in St. Casimir's parish in Los Angeles, US, by telling them that they are Lithuania's key to its future. And these were not mere words. The American West Coast is home to nearly 100,000 Lithuanians who have, on several previous occasions, contributed to building the future of our country. It was namely here that the US congressional Baltic Caucus was initiated. Thanks to Congressman Jonas Šimkus and tens of other excellent congressmen, who are Lithuania's friends, the Caucus has continued, until recently, to support us in overcoming various strategic dilemmas, including the Russian tanks drawing closer to our borders and long-term energy, information, cybersecurity, commercial or other challenges. This was exactly the place where the Lithuanians residing in California directly contributed to persuading US President Reagan to raise the sword against communism in the East. It was namely here that the march for the restoration of the rights of the Baltic States in the United Nations began and Soviet participation in the Los Angeles Olympics was blocked. This was the place where the historical families of Čekanauskai and Markevičiai and other extraordinary Lithuanian families have been and continue to be very active, never allowing the Lithuanian flag to be lowered. These honourable families have well integrated into the local political elite, which has enabled them to successfully address the issues on Lithuania's future at the highest level.

This was also the place where I convinced the Lithuanian authorities three years ago to establish a Consulate General, the sole objective of which, in my view, was to invest in the future that had, for many years, been developed in Los Angeles. The Consulate General was opened in the Ronald Reagan Presidential Library and Museum, where President Reagan is laid to rest beside his wife Nancy Reagan, who, right before her own death, congratulated us on the opening of the Consulate General as if symbolically guiding us forward into the future.

My efforts relating to the opening of the Consulate General were motivated by my understanding that the US West Coast was becoming increasingly more important in strategic terms for America itself due to its imminent confrontation with China, which would become the focus of attention later on. It is namely here, in Los Angeles, that the US major monetary deals are sealed. Los Angeles has the largest container port in the United States. This is the place that gives birth to innovation that changes the rest of the world. It is Hollywood that creates the images that impact the consciousness of not only US citizens but also the global population. As I was bidding my goodbyes on my departure from Los Angeles, it was rather symbolical that the last person I talked to was Marius Markevičius, who is currently preparing for the world premiere of his Between Shades of Gray based on a novel by Ruta Sepetys, which will undoubtedly leave a major impact on the global understanding of our history.

By investing in our bond with the Lithuanians living in Los Angeles, not only do we attract investment and innovation to Lithuania, thanks to which Americans are becoming the top employers in Lithuania, but our physical presence is also felt in the place where the US is building the future of the world. Our personal contacts with the people living there, for instance, Eli Broad, a Litvak, unofficial US minister of culture, multibillionaire and philanthropist who has contacts with all major stakeholders in the US and beyond, may be particularly valuable. So can be contacts with the Silicon Valley or other richest and smartest people in the US, mainly concentrated on the US West Coast.

This is but a small puzzle piece that can be used for building Lithuania's future. There are plenty of such wonderful places in the world where every slab of the pavement speaks of the possibilities of building the future. Even the case of relocating 20 banks from London to Frankfurt lets us know the direction the future world is moving to.

If we want to see Lithuania on the list of the top ten countries in the world, we must join forces with our fellow nationals living in such countries. The entire transatlantic community, as a single stable democratic area in the world, is in itself a top place to live. In any case, the upcoming referendum on the possibility for our citizens living in the EU and NATO member countries to retain Lithuanian citizenship translates into a referendum on the retention of our bond with the future world where Lithuania will be nowhere to be seen if we break the human bond with those top countries. We have to comprehensively reinforce our connection with the countries ranking in the top of all the lists of the leading countries in the world.

We have to search, on a daily basis, for ways to survive the next 10, 25 or 100 years. Otherwise, we will find it difficult to outweigh the growing influence by the Kremlin. It will be equally difficult to address the Achilles' heel of our country, i.e. to overcome the divide between the rich and the poor and between the regions, eradicate corruption and beat other viruses reminiscent of the Soviet times, namely, the features of an isolated police state increasingly dominated by oligarchs and other financial and banking groups, which are becoming ever more evident. This is pulling us back into the past. The post-Soviet countries as well as Central Europe have long been gravitating towards it. Only our diaspora living in the West will help to resist the tendency. We must therefore mobilise everyone to vote on our future in the upcoming referendum.

The Lithuanian parliament's board has decided to set up a task force for preparations for the...

Seimas to discuss Return Law that envisages support for relocation

Lithuania's parliament will discuss the Return Law aimed at bringing back persons who have connections...

B. Gailius. Emigration as a Lithuanian expression of freedom