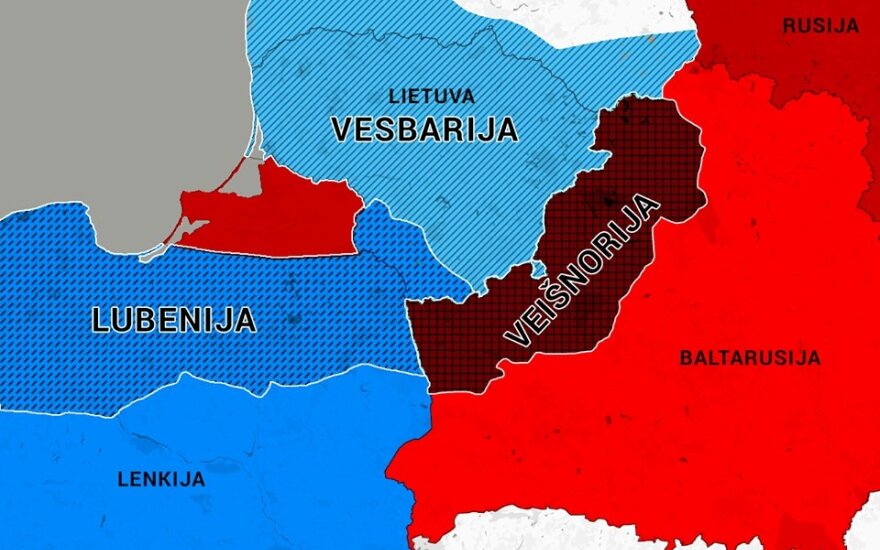 "Weishnoria", "Lubenia" and "Besbaria". Such are the odd names of the made-up aggressor countries in the released Russian-Belarussian military exercise Zapad scenario. While the Kremlin and Minsk are ardently assuring that this is only a defensive exercise not intended against NATO, just looking at the exercise legend, map and other details, one is left wondering.

On Tuesday the first deputies of the Russian and Belarussian ministers Aleksandr Fomin and Oleg Belokonev of defence released a portion of information about the upcoming Zapad exercise which is to be held on September 14-20. According to official statements, up to 12.7 thousand troops will participate. 7.2 thousand are to be from Belarus, while 5.5 thousand – from Russia. Of the latter, supposedly only 3,000 are to participate in exercises within Belarus.

Other than troops, there are to be 70 aircraft (airplanes and helicopters), 250 tanks, 200 artillery systems and 10 warships. The exercises are to be held at only ten training grounds, most of which will be in Belarus.

That said, experts have stressed for a while now that the real scale of the exercises in troops and equipment are far larger, up to 100 thousand troops, most of who will participate in training in Russia as a part of exercises which are not formally part of Zapad. Furthermore realistically hundreds more tanks, other armour units, hundreds of aircraft, artillery systems and tens more ships could participate.

Nevertheless, the most interesting part of the exercise, just as in 1999, 2009 and 2013, is Zapad's scenario. If there were rumours during previous Zapad exercises that the scenarios are reminiscent of military aggression against the Baltic States, this time it would appear it is not even being concealed.

Both A. Fomin and O. Belokonev presented the exercise legend during an official presentation, illustrated by eloquent maps. According to the legend, relations between neighbouring countries decline due to national, religious, ethnic and other confrontations, as well as territorial disputes.

"Based on events in the Middle East and Europe, the idea is based on a potential scenario where a crisis situation and conflict arises, linked with the growth in activity of foreign backed military groups, international separatists and terrorist activities.

As such the hostile forces are positioned on the Belarussian border. On one hand there are the "Northerners" to who the allied Belarussian and Russian state belong to, on the other hand there is the "Westerners" – a coalition of interested states (Weishnoria, Lubenia and Besbaria). The main cause of the conflict is the aim to destabilise conditions within the republic and seek the decline of the allied countries. This is how all military conflicts have sparked in recent times.

Belarus is intent on preventing military conflict and the region's destabilisation, while Russia provides support through judicial, financial and political measures. As such the topic of the exercise is preparation to employ the military in defending the interests of an allied state," O. Belokonev claimed.

According to him the main purposes of the exercise will be improving coordination between headquarters of different levels, testing new force management and weaponry systems, as well as building experience in "stabilising conditions."

The exercise is to be held in two stages. During stage one, the united force headquarters prepare and gather troops use in the operational region against "illegal military and diversionary-intelligence" groups, organises its placement of military air force and anti-air capacities. During the second stage questions of force leadership will be resolved through imitations of military engagement.

Such explanations may not mean much to those unfamiliar with military jargon. However just this sort of information being revealed provides certain important details. Firstly it is nothing new that Russia and Belarus are polishing their force coordination – this was done by the militaries of the two countries even during the previous Zapad exercises.

However the testing new force management and weaponry systems, as well as building experience in "stabilising conditions" shows that Russia continues to be seriously intent on improving its capacities in the areas where Russian troops have been greatly outdated in recent decades.

Examples of military history have often proven that combat leadership and troop control are among the most important elements in any conflict – good leadership by officers, effective work by non-commissioned officers and civilian officials can lead to success even without the newest of equipment.

An example of this is Israel. On the flipside, Arab militaries even armed with the latest of military hardware often suffer and lose due to poor leadership. This sort of problems were particularly prominent for Russia as well during the Chechnian and Georgian wars where Russian troops faced disproportionally large casualty counts.

What is even more interesting is the exercise map and legend. That it is first called fighting with "illegal military and terrorist groups" and is later no longer hidden that the joint leadership is massing anti-aircraft forces shows that the chosen opponent is certainly no terrorist group. After all, what group could have military aviation one would need to defend from with the long range anti-air defence systems S-300 and S-400?

"Something else is also striking. Firstly that the Russians and Belarussians are simulating a hybrid attack against themselves. They are talking about the boat rocking, in other words the escalation of social processes where it reaches a certain point and then those legendary countries take to aggressive military action.

It gives off a certain sense of déjà vu, where General Valery Gerasimov's modern conflict strategy is being refined. It did not appear to be as overtly communicated earlier – there was talk during the exercise, after it, analysts would speak, but not the organisers and not before it," Vilnius University Institute of International Relations and Political Science lecturer Nerijus Maliukevičius, who has been studying information warfare for over a decade, stressed.

Furthermore while the hostile nations of Weishnoria, Lubenia and Besbaria are imagined, it is not difficult to look at the maps presented by the Russian and Belarussian officers and see similarities with real geographic circumstances.

That the territory of Belarus borders the imaginary Weishnoria, who not only also borders Besbaria, but even matches the Lithuanian-Belarussian border, is unlikely to be accidental. Another peculiarity is that the imaginary Lubenia seemingly matches Poland, just that it is consigned a strip of land currently belonging to Lithuania.

The approximately 100 kilometre long and several tens of kilometres wide Lubenian strip of land is better known in recent years as the Suvalkai corridor.

NATO generals have warned that specifically this corridor could be where a real conflict could spark because by cutting it off, Russian and Belarussian forces could cut off not just Lithuania from Poland, but also the remaining Baltic States.

"I would view this as a light taunt. Creating a legend where one country is merged with another – Poland is handed the Suvalkai corridor, while Lithuania – a part of Latvia, this is public taunting in full knowledge of historical tensions between Lithuania and Poland," N. Maliukevičius said.

He also pointed out something the Belarussians have also observed already. The imaginary territory of Weishnoria seemingly intentionally matches the geographical delimitations of the 1994 electoral results where the popular vote was won not by Aleksandr Lukashenko who has maintained authoritarian rule since then, but his rival – Zianon Pazniak.

"He now lives abroad and exactly in April he made the declaration of independent Belarus where it is noted, what needs to be done for the government to change in Belarus, how to organise and such. As such one is left with the feeling that based on the legend the region is being viewed as a source of political manipulation, perhaps even linked with the electoral context," the analyst mused.

Even more interesting are the names of the imaginary countries and the fact that they belong to a coalition, thus we can guess that the unidentified coalition is a NATO equivalent. Weishnoria is a clear allusion to the Lithuanian name Vaišnoras – he who treats to something, Lithuania is named Besbaria, which is similar to the surname Vizbaras and Lubenia is a word of Baltic origin, stemming from the Latvian language.

It is not likely the choice of geographical, etymological and other suspiciously sounding details could be accidental. For a time now there have been concerns that the Zapad exercise could imitate the scenario of the occupation of the Baltic States. This does not mean that the exercises will end in a real invasion, but a slight possibility remains nevertheless.

Furthermore Russia and Belarus will have a clear and practically tested plan after Zapad to take such actions against the Baltic States or in this specific case against Lithuania. Regardless of Belarus and even Russia inviting international observers to their territory, such plans and supposed transparency can theoretically be a cover for Russia's real aims even while in plain sight.

US fighter jets take over patrolling of Baltic skies

The United States is taking over the Baltic air policing mission two weeks ahead of Zapad 2017...