Rimvydas Petrauskas | ldkistorija.lt
aA
Pre-Christian Lithuania was a land of oral culture. Peter of Dusburg, the chronicler of the German Order, retold an ironic joke in the early 14th century about the pagans gazing at written characters for the first time: “[Prussians] did not use writing /.../ They were completely amazed to find out that a human was able to convey his wishes to another person, who was not here, through writing.” If we leave the theories about “Lithuanian runes” aside as legends, we can safely assume that Lithuanians did not use writing for communication between themselves until the late 14th century. 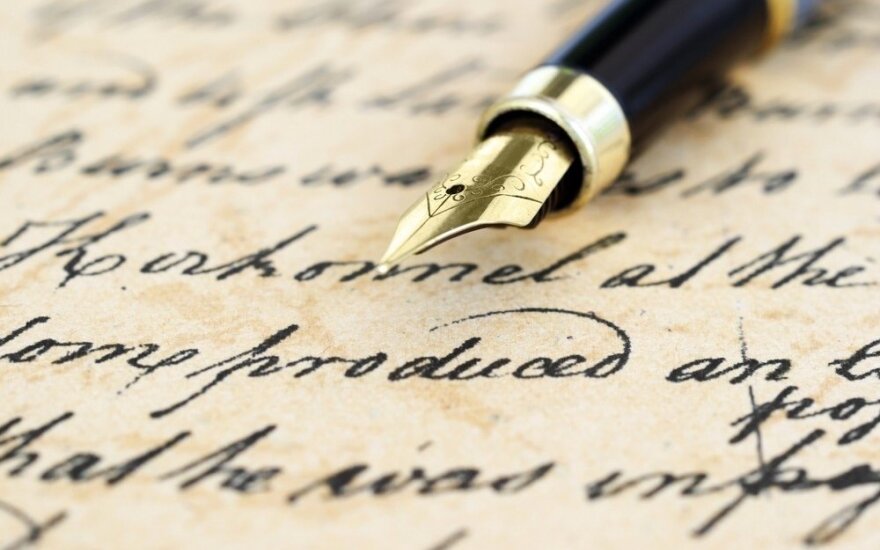 First encounters with the written word

The country's ruling elite (grand dukes and nobles), however, were familiar with documents despite the fact that they could neither write nor read. They were compelled to be in touch with the written word because of the increasingly intensifying political life and the traditions of writing in the neighbouring countries. Mindaugas, who was crowned the King of Lithuania in the middle of the 13th century, issued several documents in Latin to the Livonian Order and the newly appointed bishop of Lithuania. Mindaugas' another charter, the 1253 trade privilege to the city of Riga, indicates that the texts of the former documents have been written outside Lithuania. The privilege has been prepared by the city's residents, but apparently has not been confirmed by Mindaugas himself. The practice of compiling documents by the chancelleries of the recipients was a widespread phenomenon in many countries, hence we should not be surprised seeing it in Lithuania that was just discovering the tradition of writing. More importantly, the document has been promulgated (apparently in public) and sealed by the ruler (although one has to admit that the surviving royal seal of Mindaugas is a forgery from later times). This is how written documents found their way to Lithuania. In fact, they simultaneously "left" the country, because all letters and privileges issued by the ruler would become a property of foreign recipients and would only survive in their archives, if at all. Nobody would produce or collect copies at home.

Related articles
Journeys of diplomatic missions of the Grand Duchy of Lithuania to Moscow at the end of the 15th – the 16th centuries
The Commonwealth Educational Commission: a new approach to teachers and education

Gems of writing amid oral culture

The situation barely changed over the first centuries of statehood. The written word had been used only on the international level, for communication with other countries, until Lithuania finally adopted Christianity. Only Ruthenian lands, where the culture of writing was older, used to produce written documents for local needs occasionally at that time, such as privileges for the nobility or the Orthodox Church. Very few letters or documents to foreign recipients survive and they are rather monotonous in terms of their genre – either letters or international treaties compiled in the name of the ruler. In turn, the Lithuanian ruler sometimes received letters from foreign monarchs, e. g. from Pope John XXII's who sent a letter to the Grand Duke Gediminas or from Charles IV, the Holy Roman Emperor who wrote a letter to two Grand Dukes of Lithuania, Algirdas and Kęstutis. Best known are the letters that Gediminas, the Grand Duke of Lithuania, wrote between 1322 and 1324 to the Pope, to the Northern German cities of the Hanseatic League and to the Dominican and Franciscan monks. Gediminas promised to adopt the Christian Faith, offered his own interpretation of the conflict with the German Order and invited foreign knights, artisans and peasants to come and settle down in Lithuania.

Gediminas' letters reflect his relationship to the written word and to the texts issued in his name. In one of his letters, he easily disavowed his commitment to adopt Christianity although he had clearly stated it in his earlier letter. He explained it as a communication breakdown blaming the scribes who wrote in Latin and were not able to express his primary position correctly. "The word", the more significant thing in his cultural environment, dominates his letters. "Iron will first turn to wax and water will turn to steel before we revoke our word." Gediminas demonstrates his anger toward the knights of the German Order who had intercepted his letters. The main cause of his anger is, however, the defilement of his personal seal rather than the obstruction of his ability to convey information.

One can discover an unexpected perspective in the sparse documents issued in the name of the Lithuanian rulers. Due to its geopolitical situation, the country was compelled to adjust to different neighbours and specific features of their civilisation, culture and religion. Therefore, Lithuanian sovereigns used as many as four languages in their written communication with foreign countries in the 14th century. Gediminas' scribes used Latin when writing to Pope and other addressees in Western Europe. The communication with the German Order was in German. Treaties with dukes of Rus were in Russian during the times of reign of Kęstutis and Algirdas, while the latter's letter to the Patriarch of Constantinople was in Greek. In this sense, the situation was different from that in the neighbouring countries or in the more distant Christian states where Latin, the lingua franca of the time, was accompanied by first texts in national languages, such as English, French and German. (The Greek language was an equivalent of Latin in the territory of Byzantine civilisation, while the Russian language was prevalent in Rus.) Therefore, given the bilingual situation in Europe, where national languages developed alongside Latin, Lithuania paradoxically adopted multilingual writing. The multilingual combination could not include the local language, and this is why the Lithuanian language had to go though different hardships over several centuries.

The variety of written languages indicates that Lithuanian rulers were able to make use of scribes who could speak and write different languages. Franciscan monks Nicholas and Henry as well as their Dominican counterpart Bertold lived in Gediminas' court and even became his advisers. It is possible that their advices prompted the Grand Duke to resume the administrative reforms of the country. Living together with these literate people helped the Lithuanian aristocracy find out things about the world they had never seen and to comprehend the categories and values of that world.