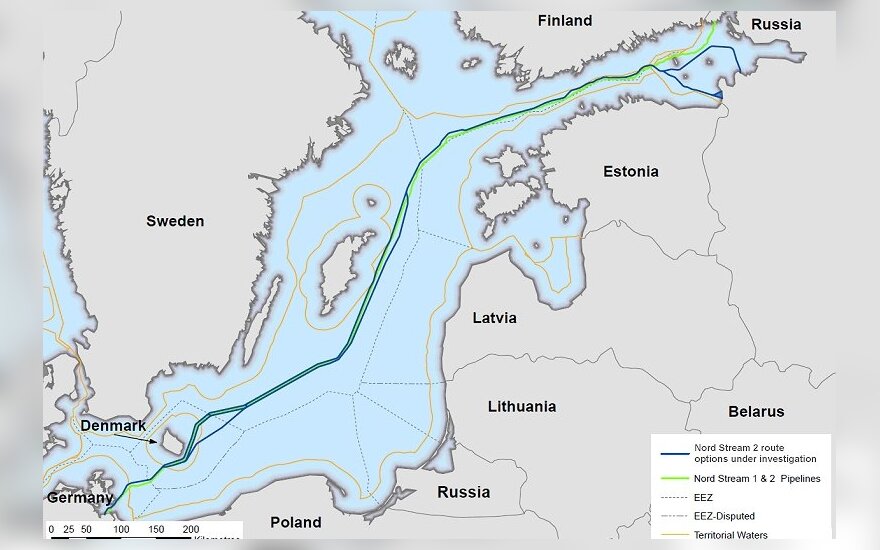 With the influential European gas company association Eurogas releasing a statement in defence of the controversial Russian gas pipeline Nord Stream 2 project and opposing the European Commission initiatives, the National Lithuanian Electricity Association (NLEA) decided to demonstrate a clear value position and withdrew from Eurogas, LRT.lt writes. Independent energy expert Romas Švedas says that such a move by NLEA was not only correct, but also a clear signal to others, while the Eurogas executives' position is proof that the organisation has been overrun by supporters of the Nord Stream 2 project.

Related articles
Lithuania, Poland united against against Nord Stream 2
Lithuania: a State in Europe or a Federal State of Europe?

LRT.lt wrote earlier how Europe, encircled by Nord Stream 2, OPAL and the TurkStream gas pipeline, with the latter one still being under construction, is willingly tying Gazprom's noose around its neck. Also, how the Nord Stream 2 project is not an object of the EU energy union regulations because it passes through maritime, not terrestrial territory. This legislative vacuum allows Russia to bypass the EU Third Energy Package requirements (the basis of the package is the separation of production and supply from network exploitation).

The EC has presented an initiative to expand the Third Energy Package directive so that the legislative regulation would encompass maritime gas pipeline construction and exploitation. However, the European gas company association organisation Eurogas released a statement in opposition of the EC initiative without consulting all its members.

Only several countries did not support Eurogas, but only Lithuania withdrew

NLEA council member, Amber Grid CEO Saulius Bilys says that the legislative vacuum, which the EC is now trying to fill, is beneficial to interested states and Eurogas chose to advocate their position without consulting members in the organisation.

"The EC has prepared an expansion for the directive encompassing the energy and gas sectors in an effort to remove legal flaws in the directive's application, however companies and interested individuals appeared, who oppose such intentions because the legal vacuum is beneficial to them.

As it is a document of European significance, in our opinion prior to making such statements concerning it, the joint agreement of all association members is necessary and failing to obtain it, such statements should not be made in the name of the organisation. The Eurogas leadership decided otherwise and, without consulting all members, made the decision to release a statement against expanding the directive," S. Bilys explains.

According to him, the countries, which disagreed with the position, requested an internal consultation within Eurogas and if consensus was not found – to withdraw the position, however Eurogas refused to do so.

"As Eurogas refused to acquiesce to our request, the NLEA made the decision to withdraw from the organisation in light of it releasing statements on fundamental energy policy formation principles in complete disregard to its members' position. To my knowledge, only we have withdrawn from the association due to this so far," S. Bilys says.

Eurogas under the sway of supporters of the Russian project

Independent energy expert R. Švedas says that the NLEA withdrawal from Eurogas is a significant and meaningful step.

"I believe this was a difficult step for the association, however in my opinion it is correct, meaningful and also sends a signal to others. It displays the maturity of the Lithuanian business organisation's values, its concern and maintaining the same position as is the state.

The EC displayed initiative in the proposal to expand the Third Energy Package so that anti-monopoly conditions would apply to not just terrestrial gas pipelines, but also those laid down in maritime locations. This is directly linked to Nord Stream 2 and this EC initiative is being supressed by all possible means," R. Švedas notes.

According to him, the position of the Eurogas executives shows that supporters of the Nord Stream 2 project have taken over the organisation and ignore the positions of its members.

"I noticed a curious fact – Eurogas did not announce the withdrawal of its member. From this we can draw the conclusion that for now they are concealing this fact, continuing their game, with European Parliament discussions and voting nearing regarding the expansion of the directive," R. Švedas explains.

To his knowledge, Poland withdrew from Eurogas already prior, the association no longer contains Estonia and now Lithuania has left as well.

"Not being in this organisation is not viewed as some sort of harm to Lithuania. A number of other associations exist, through which we can represent our interests," R. Švedas assures.

Lithuania: a State in Europe or a Federal State of Europe?

The foreign ministers of Lithuania and Denmark on Tuesday criticized the plans of expanding the...

Russia's gas concern Gazprom should compensate Lithuania and other countries of the European Union...