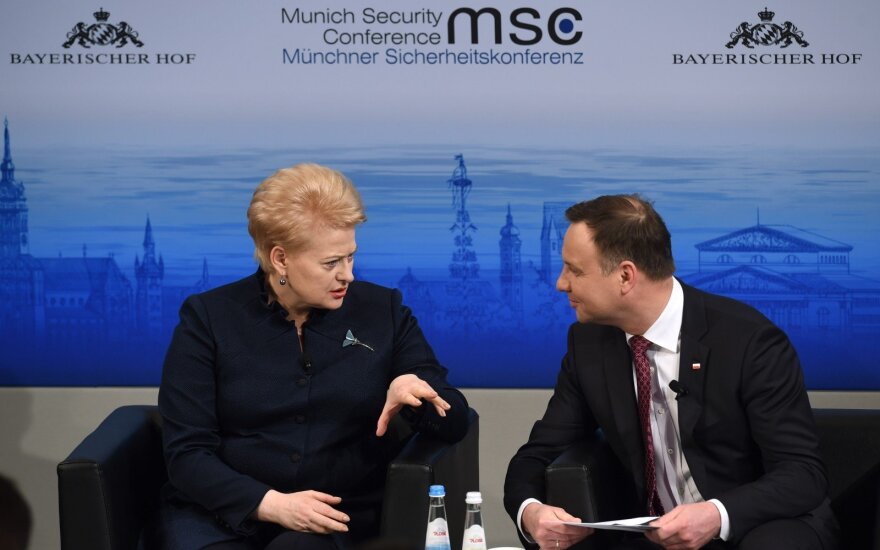 Already prior to the Seimas elections, the leaders of the new government promised to “reset” Lithuanian-Polish relations. Both Prime Minister Saulius Skvernelis and the Seimas have rhetorically committed to this a number of times. On the other hand, Lithuanian foreign policy will still be led by the same individuals, thus bilateral relations may remain the same, Alfa.lt reported

When will it be done?

Both Skvernelis and Peasant and Greens Union leader Ramūnas Karbauskis spoke of a relations “reboot” with Poland early on, with the PM stressing the wasted economic potential of bilateral trade prior to his appointment. Support for improvements in bilateral Polish-Lithuanian relations can also be found in the government programme, while the Seimas released a declaration “Regarding the strengthening of parliamentary diplomacy” on December 20 which also echoes the same sentiment.

Related articles
Where the Kremlin’s influence is largest – how to reduce isolation?
Seimas speaker suggests skipping "minor things" in ties with Poland

Nevertheless Lithuanian foreign policy is still being led by the same individuals, with President Dalia Grybauskaitė, whose term in office will last until 2019, being responsible for foreign policy and Social Democrat Linas Linkevičius being appointed Minister of Foreign Affairs in the “Peasant”-led cabinet, which is expected to be in office until 2020. Furthermore R. Karbauskis has explained that the topics of national security and foreign policy will be left in the President’s care.

While the President’s consultant Raimonda Miglinaitė stated that D. Grybauskaitė would not comment on specific politicians’ statements, the president’s environment has expressed satisfaction with current Polish-Lithuanian relations, pointing out successful mutual projects such as the first link of the electrical system LitPol Link, with a second one planned; the mutual project Rail Baltica; the planned gas link.

Cooperation in multilateral formats was also praised, notably in terms of defence cooperation under NATO. The response from the President’s environment noted common interests at the EU level and cooperation toward them. It was noted that while demonstrational visits to Poland were not favoured, meetings with President A. Duda of Poland were frequent, occurring four times in 2016 alone and also states that “Demonstrational visits are no longer fashionable in the EU, after all we meet in the European Council and various forums. No-one needs artificial spectacle anymore, specific results are needed.”

Opposition – our own homework needs doing

Kubilius stressed the need for domestic solutions, such as ones that would increase inclusion for the Polish minority. The politician noted that he, along with a number of other members of Seimas, proposed initiatives such as increasing Polish television broadcasting in the Vilnius region and providing increased higher education entry scoring for foreign language speakers.

“Such initiatives can be accomplished. Whether it will influence our relations with Poland, much depends on Warsaw, but for us it is important that internally we achieve systematic policy, something that has been lacking so far,” Kubilius said, also noting that the new “Peasant”-Social Democrat government has been cooperative toward the opposition in these questions.

Political scientist – questions of geopolitics should supersede names and charts

Public figure and political scientist Alvydas Medalinskas notes that Lithuanian and Polish politicians should rise above political struggles at home and should instead firmly cooperate, considering the current geopolitical circumstance.

Medalinskas explains that politicians on both sides need to realise how important cooperation on strategic matters is, issues such as NATO policy, the Suwalki Gap Ukraine, post-Brexit European Union or aggressive Russian policy. Doing so would side-line all other questions which raise contention, allowing for a relations reboot, even if foreign policy leadership remains the same.

According to the expert Lithuania would be best off to send a clear signal to Poland that its various expectations regarding name and surname writing are unfounded. He notes that such questions would make finding a resolution difficult because even in Lithuania opinions on the matter are split and are complicated by various constitutional factors, which complicate matters further.

“Lithuania has sufficient understanding regarding the importance of strategic relations with Poland, albeit perhaps too little effort is being made to explain that various issues that interest Warsaw are at the constitutional level,” Medalinskas explained.

Lithuania's parliament on Tuesday adopted a resolution on improvement of parliamentary diplomacy,...