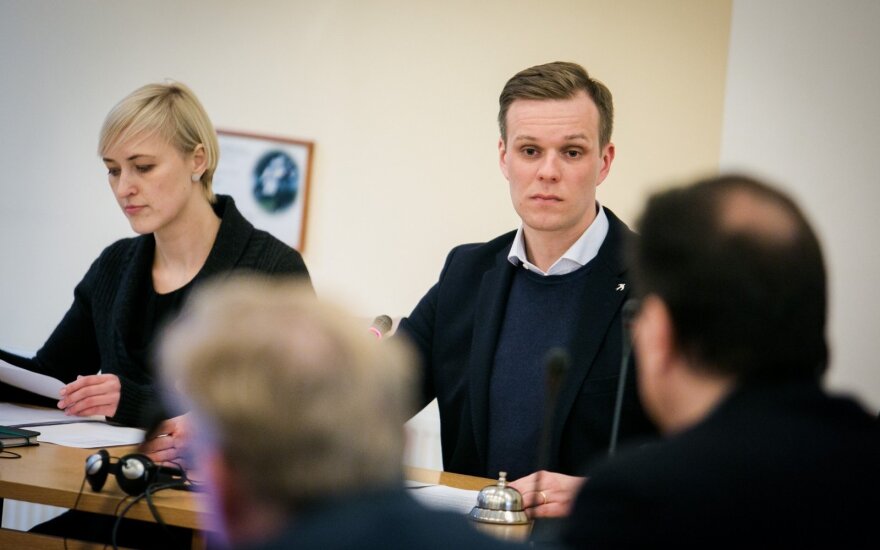 In spring 2015 the Homeland Union – Lithuanian Christian Democrats decided to greatly change the face of the party, with party leadership passing from Andrius Kubilius to Gabrielius Landsbergis. Up until October 9, 2016 party renewal and new plan for Lithuania was the Conservatives’ slogan and banner. With the Lithuanian Peasant and Greens Union winning the elections, however, the Conservatives were left in the opposition with 31 mandates.

After the Seimas elections G. Landsbergis admitted to losing, which is why the chairman elections are being called early. News portal TV3.lt reviews the moods in the main branches of the party.

One of the candidates, Vilnius city branch gathering chairman Mykolas Majauskas says that he is unable to identify a favourite. “I cannot comment on favourites, being a candidate myself. I cannot distance myself from this, though there are people who can, I try to avoid such situations. I cannot comment wearing one hat and then after with another,” he explained.

Nevertheless he observed and experienced quality discussion in the Vilnius branches. “The Vilnius branches proposed many candidates. Some confirmed participation, some didn’t. The most popular candidates proposed where those who ended up being confirmed during the presidium meeting. These were broad and open discussions and all the branches expressed their opinions. Some were more firm in their support, others wanted a celebration of democracy and open discussion. In my opinion the more discussions we have internally, the better,” assured the member of Seimas.

Kaunas leans toward the current chairman

Kaunas city branch gathering chairman Edita Gudišauskienė has not observed a clear favourite either. “We have no clear favourite, when chairman elections begin, the favourites will become clear and our members will decide and elect the most suitable candidate. We are neither taking surveys, nor evaluations,” she explained.

E. Gudišauskienė was not surprised by the candidates that were confirmed. “Personally none were surprising because definitely far more were proposed. As far as I know, debate and discussion will happen, thus we will have excellent opportunities to hear what each candidate thinks and what sort of vision they have. Both for our party life and work, but also what vision they have for the future of Lithuania. Gabrielius Landsbergis received the most trust in Kaunas, but each member will choose on their own,” said Gudišauskienė.

Klaipėda – an opportunity for Agnė Bilotaitė

Agnė Bilotaitė, who is currently abroad, heads the Klaipėda branch gathering; she is also a candidate for the post of party chairperson. Instead of her, the moods of the Klaipėda branches were presented by Danė-Klaipėda branch chairman Tomas Meškinis. “Truly they are all suitable candidates, they are all young, with just Žygimantas Pavilionis being older. Beyond that they are all of a similar age. The selection is large, we want to renew, rejuvenate. In the branch itself there are various opinions, the elections will show because they are secret. That is how the actual moods will be revealed. They are all worthy, in their own way,” he explained.

While predicting a showdown between the incumbent chairman and Žygimantas Pavilionis in the second round, Meškinis does not discount the potential of Agnė Bilotaitė. “In the second round we will likely have a showdown between Gabrielius Landsbergis and Žygimantas Pavilionis. It will be a difference of years and everyone who wants continuity in the party will be able to choose. If they want something new then they will perhaps opt for Pavilionis. In terms of international experience, Pavilionis has it, but you also need to work in Lithuania. Of course in Klaipėda Agnė Bilotaitė could gather more votes as well,” he explained.

The Šiauliai branch is more inclined to support the incumbent chairman Gabrielius Landsbergis, albeit with branch chairman Tomas Petreikis pointing out that all the candidates are strong and have the potential to win.

The Panvėžys branch is also more inclined toward the current chairman. Nevertheless, branch chairman Maurikijus Grėbliūnas reminds that in many cases people make up their mind on voting day so much can change.

The Vilnius region branch chairman Gediminas Kazėnas highlights the region’s support for Paulius Saudargas, who was one of the two candidates proposed by the branch (with the other being Laurynas Kasčiūnas who opted not to run as a candidate). Kazėnas notes a prevalence of Christian Democrat attitudes in the branch, with Paulius Saudargas being seen as well positioned to represent said value base.

The Ukmergė branch chairwoman Agnė Balčiūnienė observes that the branch leans toward the candidacy of Gabrielius Landsbergis, with one of the proposed candidates proposed by the branch Vygaudas Ušackas also declaring his support for the incumbent chairman.

The Marijampolė branch plans to invite the candidates for debate, leaving for members to decide themselves, nevertheless branch chairman Kęstutis Traškevičius notes that in the previous election the branch leaned toward Gabrielius Landsbergis and this could repeat.

The Utena branch has received visits from almost all the candidates and branch chairman Edmundas Pupinis notes that much will depend on the election campaign, but in the end concludes that likely Gabrielius Landsbergis will win.

Alytus branch chairman Povilas Labukas received the five candidacies very positively, praising their youth, professionalism, but also empathy. He notes that the voting was fairly close between Gabrielius Landsbergis and Irena Degutienė in the 2015 election, something that could repeat.
Jonava branch chairman Justas Dieninis believes it is likely the branch will support the current chairman once again, just like in 2015. Nevertheless he does not fully commit to this line, noting that opinions can shift.

Five members of the Homeland Union - Lithuanian Christian Democrats (TS-LKD) have confirmed that...

Atmosphere heating up in the TS-LKD – chairman campaign begins

At least 2 to challenge Landsbergis in Conservatives leadership election

With less than a week to go before a deadline, 12 candidates have been proposed for the post of...