Will emigrants flood back to Lithuania after Brexit?

DELFI
aA
One of the biggest questions raised by Lithuanians in the wake of the United Kingdom's vote to leave the European Union is what will happen to work migrants in the country. Will Brexit cause a wave of emigrants returning to Lithuania, and if so, what awaits them in Lithuania? 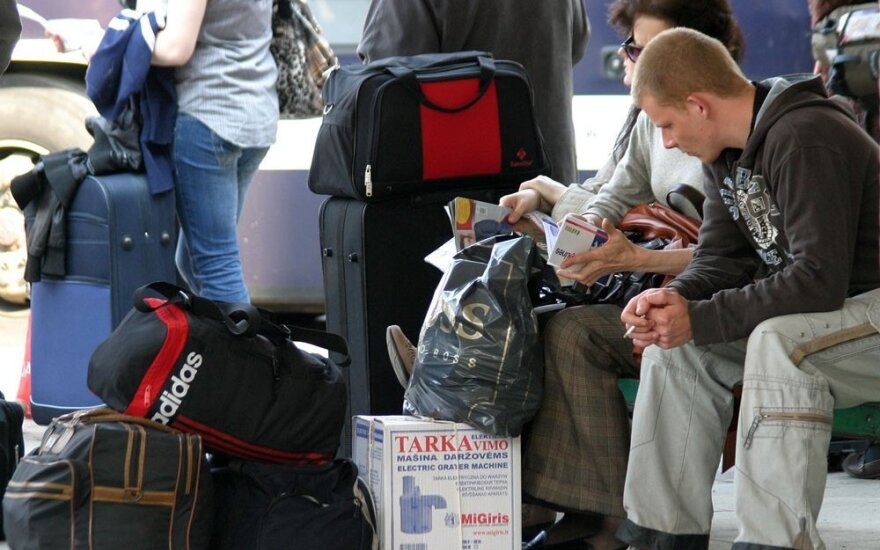 Migration specialists Karolis Žibas and Audra Sipavičienė said that it would be not be rational to expect a wave of return emigrants because Lithuanian wages have not yet come near those in the UK.

Experts say that there are only two things that can be expected after the Brexit if London actually begins exit procedures: either a drop in emigration from Lithuania, or a change in the locations to which Lithuanians emigrate. However, they will not deny that some emigrants may decide to return to Lithuania as well.

Sipavičienė said that one of the worst decisions would be for Lithuania's government to invite emigrants to return home without considering the detail of where returning migrants might work and live.

Žibas pointed out that the exit process has not yet begun just because the British people voted for the Brexit in a referendum. The process will only begin when the UK's government activates Article 50 of the Lisbon Treaty.

However, current prime minister David Cameron has said that he will leave this to his successor, who will only be chosen in October at the earliest, when Cameron resigns.

The Bertelsmann Stiftung organisation identified thre potential scenarios in a study on the costs and benefits of the UK's withdrawal from the EU.

In the least favourable scenario, the UK will be isolated and lose any priority access to the European market. The financial cost of the withdrawal and the changes in migration all depend on these scenarios.

How will this affect migration?

The National Bureau of Statistics in London has calculated that, in 2014, about 2.9 million citizens of other European Union countries lived in the United Kingdom. Of these, 1.242 million were from EU8 countries (Czech Republic, Estonia, Poland, Hungary, Latvia, Lithuania, Slovakia, Slovenia).

Resistance to immigration was one of the main arguments used by supporters of the withdrawal from the European Union. Therefore it is not impossible that the UK may decide to implement immigration restrictions.

In this case, that would mean limitations on immigration from EU countries. The Bertelsmann Stiftung study calculated that a reduction in immigrant numbers of at least 10%, Britain's income per capita would fall by between 0.5% and 1.1%. If the number of immigrants were to fall by 50%, the loss would be even greater at between 2.7% and 6.2% in the long term.

Could Lithuanians move to Norway and Sweden?

According to Eurostat, about 160,000 Lithuanians lived in the UK in the beginning of 2014. Though the United Kingdom does not belong to the Schengen Area, it was open to free movement of labour.

“If the Brexit is actually completed, I think that conditions may appear during the withdrawal process that would regulate mobility within the European Union. There's a big question of how that will be done. I think that the United Kingdom's politicians understand that immigration to the country contributed to economic growth. This is a fact. Only populist parties who have associated their entire campaign with immigration, and even lied, have denied this,” said Žibas.

He also said that that though immigration to the UK may at some point be limited, the country's withdrawal will probably not affect Lithuanians who currently legally live and work there. This would affect people who have not yet settled down in the UK or those who are still planning to go there.

Žibas believes that, after the UK's withdrawal, a new destination for migrants will be more likely than a return to Lithuania.

As an example, Žibas mentioned the behaviour of migrants during the economic crisis between 2008 and 2010. At the time, it was hoped that migrants would return to their own countries (Lithuania and Poland), but they simply turned to northern countries like Norway and Sweden.

One of the main reasons scientists believe emigrants wouldn't return to Lithuania from the UK is the difference in salaries. Sipavičienė, the head of the Vilnius office of the International Organization for Migration, said that return migration would naturally grow if there was higher demand for labour and wages were higher than they are now. According to her, the attractiveness of salaries in Lithuania depends on the industry.

Sipavičienė said emigrants are not interested in positions that pay minimum wage. However, she did not rule out the possibility that the results of the UK's referendum may cause Lithuanians working in the UK to panic – for them, returning to Lithuania may seem safer than staying in a country in which their future is uncertain.

“However, I think that emigration from Lithuania to the United Kingdom may drop,” said Sipavičienė.

The Vilnius office of the International Organization for Migration said the most popular countries for Lithuanian emigrants in 2005-2015 were the United Kingdom, Canada, Ireland, Germany, Norway, Spain, the USA, Russia, Denmark and Sweden.

When asked when the best time would be to lure emigrants home, Sipavičienė said that those returning need specific information and certainty that they will be able to survive while they look for work. She emphasised single parents with children as an especially vulnerable group. She said that some young people were glad to return from emigration to immediately begin mandatory basic military training.

“If you return with nothing, you return like a loser, but if you make it into the military, you became a defender of your homeland, and then you also have certain privileges when entering higher education. However, the very worst thing would be to invite people to return without thinking about the details, about what people will do when they return.

“Employers say that they lack workers, but I don't know if their salaries would satisfy returning emigrants. They need workers but they want to get them cheap. If you want a good worker, however, you have to raise the salary. However, small businesses may not be able to handle these costs,” she said.

Lithuanian expatriate Birutė Scobee shares the inspiring story of her struggle to make it in the...

Lithuanian emigrants return to spend €80m on products in Lithuania

Lithuanian emigrants return to Lithuania an average of twice a year spending almost €80 million on...

Lithuania will 'remain important friend to Britain’ after Brexit

Claire Lawrence, the UK ambassador to Lithuania, has said that Lithuania will remain "an important...

Britain will maintain its trading access to the European Union only if it agrees to the principle of...