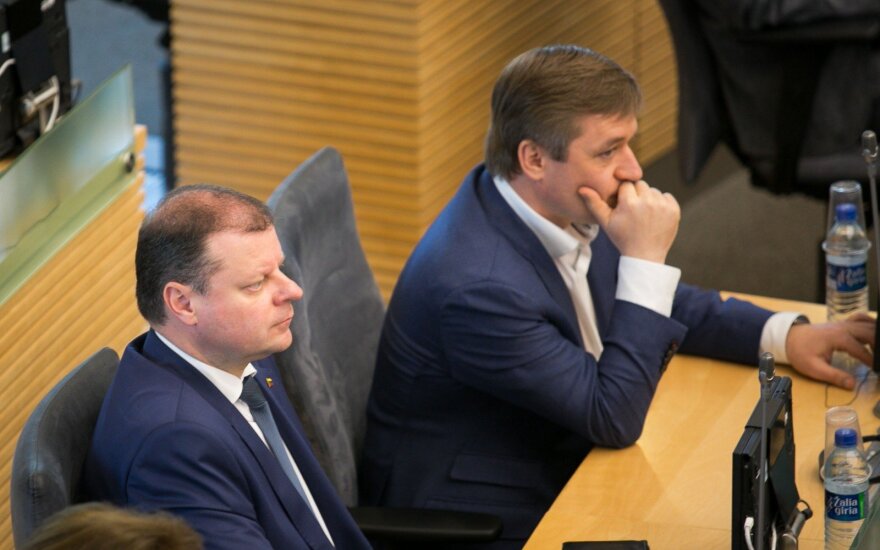 The previous coalition of Algirdas Butkevičius held its popularity for a long time, while the current majority has significantly declined in the ratings over the past year, decreasing by almost half. According to commenters contacted by LRT.lt, such a situation may be due to several factors.

"The December after the Seimas elections is usually the mark from which party ratings begin declining, though of course not always. In December 2012, immediately after the Seimas elections, the Social Democrats had the support of 35.3% of voters, the Labour Party – 24%, the Order and Justice Party – 9.3%. This accounted for a total of 68.6%, with all results added together.

After a year, in October, the parties had the support of 67.7% of voters – the result was essentially unchanged. The ratings of the then prime minister and Social Democrat party chairman A. Butkevičius even rose over that year. They had a successful first year and during it, the ruling coalition's situation essentially did not worsen," V. Gaidys reminds.

Meanwhile the circumstances of the current ruling coalition has shifted toward the negative side, the political scientist points out.

"In December last year after the elections the Lithuanian Farmer and Greens Union (LVŽS) reached its peak – had 45.5% support, while the Social Democrats had the backing of 11.3% of voters. Added together this is 56.8%. Thus a year ago the ruling coalition already had somewhat fewer votes than the representatives of the previous coalition. A year on, the "Farmer" ratings declined more than twice, to 20.5%, while the Social Democrats' ratings rose a little now – they have 16.5%. As the ruling coalition they should have 37%, but one cannot tell whether there still is a coalition or not," the head of Vilmorus notes.

Would vote for the Lithuanian Farmer and Greens Union (Vilmorus survey)

Regardless, he notes, the majority's ratings decline over the past year has been massive. Furthermore, the ratings of former Prime Minister A. Butkevičius actually rose last term, while S. Skvernelis, while still one of the more popular individuals, lost the support of 20% of voters. "In summary we can say that the situation of the previous majority was far better than this time," V. Gaidys concluded.

The general director of the company Baltijos Tyrimai, sociologist Rasa Ališauskienė says that while A. Butkevičius would encounter communications problems, to the extent that there were jokes that in the morning his opinion may be one, while in the evening – another, he did not irritate voters. The rhetoric of the current head of cabinet, however, has been called brusque by some political analysts.

What could have led to such results?

According to Vilmorus head V. Gaidys, the "Farmer" ratings could have greatly declined due to the unpopular legislation being passed.

"Every month people see one or two unpopular decisions, starting with the Labour Code, ending with medication. Such episodes are far more numerous, from the very start of governing they are met with misfortunate in explaining the decisions they are making. There were also alcohol prohibitions and others, now we hear about teachers and doctors' complaints over wages," V. Gaidys reminds LRT.lt.

Meanwhile R. Ališauskienė says that voters have tired from the constant scandals by the ruling coalition: "It is one scandal after another in the public sphere, regardless of whether it is linked with serious decisions, say the Labour Code or personal matters, Greta Kildišienė's story for example. People tire of it."

Furthermore, the sociologist notes, the "Farmers" received the majority, made many promises and voters once more hoped that the promises will be fulfilled within a few months. "They were trusted as the alternative to the previous older parties which ruled longer. Many expectations were placed on them, that someone strong, rich and capable of solving problems will come. But problems weren't solved. There were promises to make medication and heating cheaper – the things that "hurt" the wallet. What do we have though? Furthermore the coalition fell apart," R. Ališauskienė commented on the majority's ratings decline.

According to her, the people are overall disappointed with parliamentary parties – while the majority's ratings fell, the support for other political powers did not grow – the percentage of those who prefer no party rose by a whole 10%.

Political analyst Kęstutis Girnius says that the previous Social Democrat coalition was indeed very popular – no cabinet bar Algirdas Brazauskas' was as such.

"We must recall that A. Butkevičius and the Social Democrats were loved by the voters for almost 3.5 years. This love vanished only with 3-4 months left to the elections. The popularity of the previous government was hard to understand for me, but it was very real and very lengthy," K. Girnius comments for LRT.lt.

According to him, while the LVŽS came to power with a mass of new people, many mistakes were made.

"For example Minister of Healthcare Aurelijus Veryga is responsible for a great number of controversies – starting with alcohol and ending with medication. Such matters impact many – retirees and others for example. A lack of experience and confusion is felt in the party. Furthermore I believe that the news media was also inclined to look at the "Farmers" negatively – when the latter fell, it was noted, which was perhaps not always done before. The main factor was that hope that they will achieve much," the political analyst mused.

On the other hand K. Girnius adds that we have to recall that the "Farmers" were never that popular – in the first round they were surpassed by the Conservatives.

"The "Farmers" won the majority only because that people voted against the Conservatives and against the Social Democrats later on, rather than because of the "Farmers" themselves. Thus the "Farmers" perhaps arrived imagining they are more popular than they actually were. When the cabinet was formed, mistakes were not avoided," K. Girnius explains.