Why Putin can’t keep his promises on peacemaking in Baltic

Pavel Felgenhauer, Jamestown Foundation
aA
Russia’s president made a number of promises to reduce tensions with NATO in the Baltics and Eastern Europe but for reasons both practical and technological those promises cannot be kept. 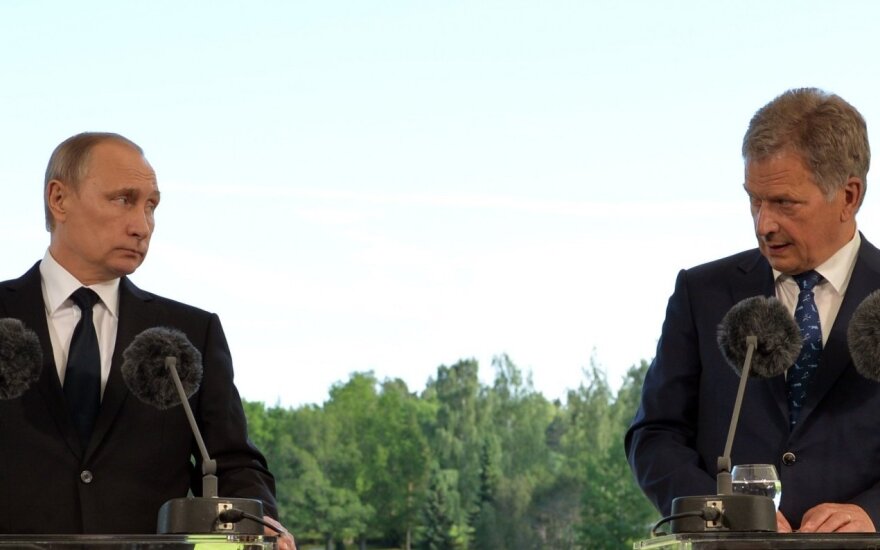 Last week, during a visit to Helsinki, Russian President Vladimir Putin threatened that Finland’s security would be undermined if the Nordic country decided to join the North Atlantic Treaty Organization.

Speaking at a joint press conference with his Finnish counterpart Sauli Niinistö, Putin insisted “we cherish Finnish neutrality” and boasted “Russia has withdrawn its forces 1,500 kilometers away from the borders of Finland.”

If the Finns join NATO, “the Finnish military will cease being independent or truly sovereign—they will become part of NATO’s infrastructure that will, in one instant, reach Russia’s borders,” he stated.

Putin acknowledged the Finnish people may decide their own future, but Russian forces “will hardly stay 1,500 km away” and predicted, “NATO will be ready to fight Russia until the last Finnish soldier”.

Putin repeated the 1,500 km distance of Russian troop withdrawal several times—this was not a onetime slip of the tongue—though it does not make any sense: A 1,500 km wide zone extending from the Finnish border covers a large part of European Russia, including St. Petersburg, Moscow and Pskov, encompassing a large number of well-known pre-existing military garrisons and bases.

The Kremlin did not officially comment on or retract the statement. The chief of Putin’s administration and a long-time associate of the Russian president, Sergei Ivanov, is reported to have unofficially interpreted the “1,500 km” statement as meaning the length of the Russo-Finnish border and that all Russian combat forces have been withdrawn from positions directly on the border, but not to the depth of 1,500 km.

Putin clearly misspoke, but the overall message was clear: If Finland continues to drift toward NATO, Russian forces will return directly to its doorstep.

Meanwhile, military aircraft and ships of Russia and the United States have had a string of close encounters in the Baltic region recently. A possible future midair collision could trigger a crisis that might escalate into a regional armed conflict involving Poland, the Baltic States and the Kaliningrad enclave, which is sandwiched between Poland and Lithuania on the Baltic Sea shore.

Niinistö called on Russia’s and NATO’s militaries to agree to confidence-building measures “to avoid dangerous accidents.” Niinistö’s proposal specifically included the requirement that all military aircraft of all countries fly in Baltic region airspace with switched-on transponders—devices that automatically transmit the identity of an aircraft as well as its position and altitude in response to a radio-frequency interrogation.

Putin agreed with Niinistö and promised to order Russian diplomats to offer a set of confidence-building measures, including the use of transponders, at the next ambassadorial-level meeting of the NATO-Russian Council, planned for July 13 in Brussels.

Russian Defence Minster Sergei Shoigu issued a statement in Moscow ordering the Ministry of Defense “to prepare confidence-building measures and technical proposals on the use of transponders by the Russian VKS in accordance with presidential orders.” The defense ministry press service explained that switched-on transponders could allow foreign civilian air traffic control services to identify Russian military jets in international airspace over the Baltic Sea.

“If NATO nations agree, their jets will be flying close to Russian borders with working transponders; Russian military specialists could proceed into detailed expert negotiations on the subject,” the Russian defence ministry said.

In the past, Russia’s defence ministry has claimed that Russian jets’ close encounters with US aircraft were intended to visually read the latter’s identification numbers. The joint Niinistö-Putin initiative requiring all military jets to fly over the Baltic with their transponders on could make such close intercepts unnecessary, greatly reducing the risk of an unintended collision leading to crisis and confrontation.

The problem is, Russian military jets do not have and never had any transponders, so they have nothing to switch on. Only some transport and passenger jets belonging to the defence ministry have installed transponders; and their crews know some English to speak with civilian air traffic controllers, in order to be qualified to fly more financially lucrative commercial routes. Russian combat air crews, on the other hand, speak almost no English and are not trained to use transponders or parley with civilian air traffic controllers.

Instead of civilian transponders, military jets have friend-or-foe identification devices (IFF). Modern US IFF devices may have cryptographically secured transponder capabilities to disclose their identity, flight info and GPS position, but the digitally coded IFF “Patrol,” commonly used by Russia and developed in the late 1970s, does not have that feature.

US jets could possibly “switch on” transponders, but their Russian counterparts cannot. It would require years and billions of dollars to develop and install Russian-made next-generation IFF devices that could also act as transponders; moreover, the VKS command would be unhappy to see their jets flying with any foreigner able to peep in on their activities.

Thus, the transponder confidence-building proposal does not seem to make much sense. Nevertheless, a high-ranking US official, who asked not to reveal his name, since he is not authorized to make public statements, told this author that the Pentagon has no intention to “switch on transponders on recon[naissance] missions over the Baltic Sea in sight of Russia”.

According to the Russian ambassador to the North Atlantic Alliance, Alexander Grushko, the NATO-Russian Council next week will discuss a wide range of issues, including confidence-building measures, but Moscow is not optimistic there will be any progress at all.

“There is no positive agenda between us and NATO,” continued Grushko, “So we try to use other bilateral and multilateral venues to achieve something.” According to Grushko, Moscow proposed to the Pentagon, through military channels, some confidence-building measures like defining the exact minimal distance jets and ships may come close to each other without colliding.

The Pentagon has not responded. The transponder issue is apparently not truly on the table. Grushko warned NATO’s eastern flank members that their security will not increase but diminish with the deployment of additional frontline forces, since Russia “will see them as a threat” and target them.

The Cold War pattern of threats and counter-threats, of blackmail and peace initiatives that are in effectagitprop posturing seems to be back in force. So perhaps—with bloody proxy wars on the fringes in Ukraine and Syria, and with uneasy rigid dialogue that fails to change well-entrenched opposing positions—the Cold War itself is back as well?

US president Barack Obama has urged NATO countries to collectively stand up to Russia in the Baltic...

A new study has found that sanctions imposed on Russia in the wake of its annexation of Crimea have...

Russia has fired the top military commanders of its Baltic Fleet , which is based at Kaliningrad ,...

The Kremlin is enjoying the discomfort that Brexit is causing to the European Union. But that does not...