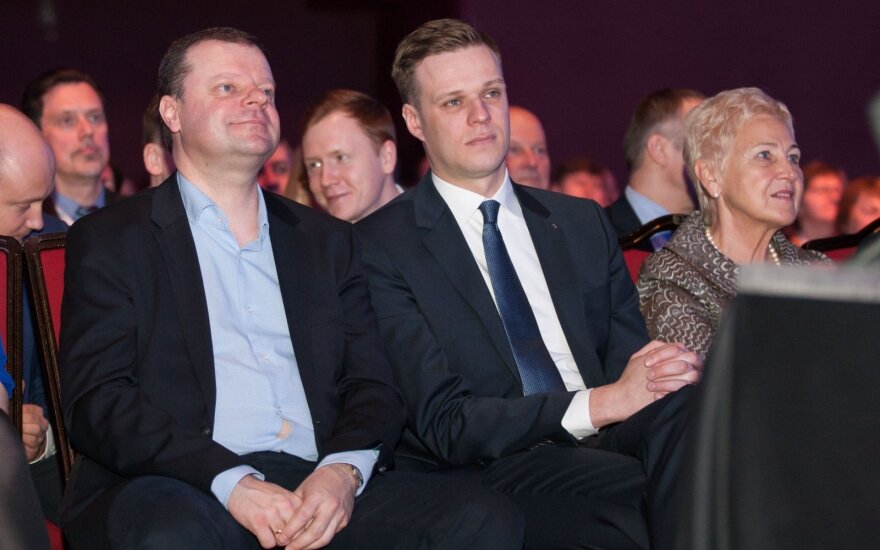 The Lithuania’s Farmers and Greens Union (LVŽS) is riddled with tensions over disagreements, fuel to the fire was thrown by not the first publicly unannounced meeting between the Prime Minister Saulius Skvernelis and the leader of Homeland Union – Lithuanian Christian Democrats leader Gabrielius Landsbergis. More talks are heard that “farmers” face a divide which may benefit the conservatives, Lietuvos Žinios reported.

Related articles
President sees discussion about coalition split as ruling bloc's mistake
Tensions rising: there is no hiding that problems among Farmers are real

LVŽS faces a bigger divide between S. Skvernelis and the party leader Ramūnas Karbauskis. Group members are not hiding that the Conservatives might be behind the disagreements. The talks are fuelled by the meetings between the Prime Minister and G. Landsbergis.

Tomas Beržinskis, the advisor of S. Skvernlis, explained that the meetings with G. Landsbergis like with other leaders of opposition are not made public because they are routine – work related. “Second, the prime Minister meets not only G. Landsbergis but also other leaders of opposition: for example, Agnė Bilionaitytė, Eugenijus Gentvilas, Rita Tamašiūienė and others have visited the Government. The Prime Minister has mentioned countless time that he will meet and communicate with all politicians without exception: coalition and opposition alike – that is what he is doing. It is not a question for me on why the media highlighted the meetings with G. Landsbergis” said T. Beržinskas.

According to him, political actualities are discussed during these meetings: previously it was the Spring session tasks in the Parliament, later – main reforms by the Government, yesterday – the topic of emigration and how to solve this issue. “What is expected? A smooth cooperation between the Parliament and the Government that are necessary to Lithuania. Changes, in which all politicians should be interested in despite what group they belong to” said T. Beržinskas.

G. Landsbergis, who attended several publically unannounced meetings with the Prime Minister stated “he has nothing to hide”. “In general I am transparent, I declare everything on Facebook. I talking seriously I think that there is turmoil in LVŽS political group, the fear of future changes, mistrust in the Prime Minister with all suggestions about emigration, it is hard to pint where did it come from. I think that the opposition will be the power to support the Prime Minister in critical times” he stated.

The question is why the opposition to S. Skvernelis is Conservatives and Liberals are not invited, G. Landsbergis answers laconically: “I think that maybe a Thuja tree got in the way.” By this he implies that there may be disagreements between the Prime Minister and Remigijus Šimašius, the leader of Liberal Movement. Recently S. Skvernelis has criticized the mayor of Vilnius that his only accomplishment over two years is a cut down Thuja tree.

In the opinion of G. Landsbergis the destiny of Parliaments’ LVŽS political group will depend on their own decision. If the “farmers” fail to find a solution to work together, the group may fracture. In that case, would the Conservatives consider a coalition with the apostates? TS-LKD leader said that he does not think or comment on it. “Our position remains the same. Taking into account the issues, we will either support them or not”, he stated.

The games of G. Landsbergis

The head of Liberal movement opposition at the parliament Eugenijus Gentvilas stated that he does not attend these meetings like G. Landsbergis. “Gabrielius implements some public relations actions by showing his importance, teasing and fracturing “farmers”. S. Skvernelis gives in and plays G. Landsbergis games. This is their business. I don’t do that. I have met S. Skvernelis numerous times, talked shortly, we had lunch at the Government, but we have never talked like “listen, you support us here, lets form a coalition”, just normal and pleasant communication between S.Skvernelis and myself”, he assured.

As stated by E. Gentvilas, said that the liberals don’t feel bad that they were left in the shadow of meetings between S. Skvernelis and G. Landsbergis. “Moreover – we are happy not to be involved. “Farmers” have their own issues and have to deal with them, were not the ones that caused them. G. Landsbergis tries to be active in fracturing them, we don’t do that.” – noted one of the liberal leaders.

When asked whether he sees a possibility of the Parliaments LVŽS group to fracture, E. Gentvilas said that he sees “a boiling pot” amongst the “farmers”. “Different people are gathered in the same group. It is possible that they won’t avoid differentiation”, he forecasted.

According to Rima Urbonaitė, a professor at Mykolas Riomeris University, institute of Political Science, certain steps by S. Skvernelis are determined by his relationship with R. Karbauskis. At least from what is seen in the public eye, they no longer have a warm relationship or good communication. “A few weeks ago the issue was that Social Democrats are not partners, and today the issue has another aspect: the question is whether the “farmers” group is the one supporting the Government. In other words, the Government has a challenge regarding support in the parliament”, highlighted the political scientist.

The complicated relationship gets in the way for possible reforms and may encourage S. Skvernelis to look for new partners. “If we talked almost about conspiracy theories, that there may be a fracture in LVŽS political group, and if later S. Skvernelis would be followed by a lot of its members, when adding the Conservatives (and maybe liberals as well), we might have a new majority. However, this would have to happen quickly, because if it was prolonged there would be no reasons left to change the coalition itself – when the elections are almost here, the parties won’t go there as not to harm themselves”, thinks political scientist.

Why does S. Skvernelis go to Conservatives when looking for support? According to R. Urbonienė, the Prime Ministers friendship with them has a history, he was not against having a coalition with TS-LKD after the elections. Also, this is the largest opposition party and their support has a lot of political weight. It is also important to state that in some areas the opinion of S. Skvernelis is more similar to the Conservatives than “farmers”.

TS-LKD is also interested in maintaining the relationship. R. Urbonienė said that in that way the Conservatives are more visible and can join some anticipated reforms even if they are I the opposition. Also, they could collect extra points for the election. “The Conservatives can play this game. On one hand, they are in opposition and can criticize the Government. On the other hand, they can be important in some solutions because they can give support to S. Skvernelis which he may not get from LVŽS political group” said the political scientist.

Skvernelis’ test for Karbauskis: signatures have already been gathered

Following disagreements among some of the members of the ruling political group of the Farmers and...

Nauseda: relations with Japan improving, but some potential still untapped