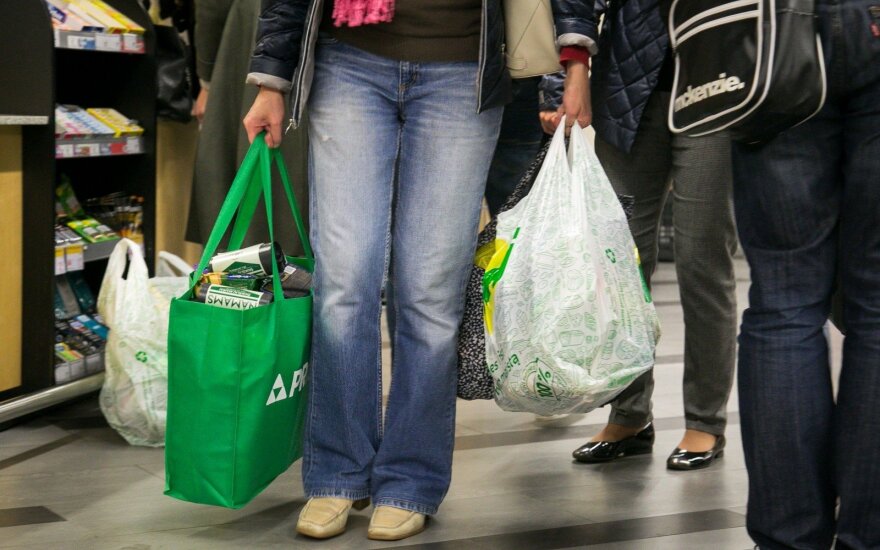 Retail is still the most popular employment in Lithuania. However at least in the major retailers, the number of retail employees has declined by almost a tenth over the past two years.

According to Sodra data, at the end of November, the largest company in the country, Maxima LT had 15.6 thousand employees. This is 1.6 thousand or 9.4% fewer than two years ago.

Over the same period the number of employees at the second largest retail chain Iki declined by almost 700 or also some 9%, down to a little over 7 thousand.

Reductions are a little more moderate (4.5% or 158) in the company Rimi Lietuva. With 3335 employees it is behind Norfa based on this metric, with the latter having 3385 employees, just 4 fewer than two years ago.

In total 63.1 thousand Lithuanian citizens worked in retail this October – 64 fewer than two years ago. The average retail wage rose from 355 euro ("on paper") in October 2015 to 435 euro this October.

Maxima department of personnel director Margarita Plešakienė commented that over the past two years the company's employment figures declined 9% due to objective reasons:

"Firstly, in order to distil and focus on our main activity – retail sales, in January last year physical security branches were separated and split into four separate companies.

These secondary companies continue to offer security services for all Maxima branches. With the aforementioned companies being split off, more than 800 employees moved to work in them. They make up almost 5% of the reduced employee count."

According to the director, the remaining reductions (lesser number of new hires) were due to more effective processes and record self-service checkout expansion. Just in 2018 there are plans to invest 2 million euro and establish around 150 brand new self-service checkouts in 26 stores.

"Being the largest creator of jobs in the country, creating good, favourable working conditions, we are actively seeking to both maintain current jobs and attract new employees – currently across the Maxima network we are seeking more than 600 staff," the company representative stated.

According to her, every day employees from various towns and regions – Varėna, Šalčininkai, Eišiškės, Molėtai, Utena and others are taken to and from work in Vilnius. This way opportunities to be employed in the capital increase not only for Vilnius residents, but also for those from more remote regions. Employees are also taken from central Vilnius to more remote regions.

Furthermore, according to M. Plešakienė, a part of the employees are housed in dormitories in Vilnius. For a number of years employees have also been offered free meals – a two course lunch.

The head of public relations for the Iki retail chain Berta Čaikauskaitė outlined several reasons for reductions in the number of colleagues. Firstly it is related to changes in the number of stores, which is now 231.

"The second reason for reductions in employee counts is linked to optimisation in the operations of the retail chain, which is necessary in order to grant customers the best shopping experience. We are constantly renewing and investing into increasing work process effectiveness, such as self-service checkout expansion. This helps ensure more effective work for stores.

However our retail chain is putting in all efforts to retain its staff and attract new employees. We are dedicating great attention to employee education and development, working conditions. We are adjusting it in relation to changes in the job market, trying to hear out our employees' opinion and consider their wishes," the Iki representative stated.

The executive director of the Lithuanian Retail Company Association Laurynas Vilimas summarised that the changes in major retail chain personnel counts are due to a variety of reasons.

For example during this year one chain separated its security staff from its main operations, another closed a number of stores, a third automatized processes.

"Nevertheless there are a few common factors such as more effective processes, seeking the most optimal model of operation, reviews in employee functions. Due to this the number of "jobs on paper" may decline, but not the real number of employees.

I am certain that with the currently declining demographic situation in the country and intensifying competition (at least in the retail sector) is also contributing to the observed negative balance in retail employment," the association head commented.

Self-service checkouts on the rise

Marketing strategy expert Linas Šimonis is certain that the declining number of retail employees is due to the expansion of self-service checkouts.

"They are increasingly popular. It would appear that the retail chains are highly inclined toward self-service. This is natural, particularly with rising wages.

Employment costs are fairly notable. It is understandable that all companies, including retail chains, are seeking to replace staff with something else as much as possible to avoid having to pay wages," the expert commented.

According to him there is increasing investment in not only client service, but also other processes such as warehousing, IT infrastructure. With better operative organisation, every employee does more and thus fewer are needed:

"I believe that these are completely natural processes and they will be visible in more than just retail chains, but also in other places wherever it is possible to replace people with robots, automatics, something else. It will be done after calculating profitability.

If you calculate how much each employee costs, the sums are massive. In Western Europe where labour force is even more expensive, investment in more effective tools, equipment and such has long been undergoing. Self-service checkouts are only beginning in retail chains. Such trends appear in Lithuania as well. Many people have noticed that one can shop faster in self-service checkouts, rather than waiting in line, leading to their popularity."

Self-service checkout vendors do not publicise the prices of the equipment itself, its software and integration to existing company systems.

Nevertheless specialists Delfi has spoken to stated that a single self-service checkout, depending on modifications (such as whether it takes only card or also cash payments) can cost at most up to 20-30 thousand euro.

If a store with such a checkout operates every day from 8AM to 10PM (14 hours a day), over a week this amounts to 98 hours or almost 2.5 full time job positions, if every employee worked only the 40 hour standard weekly shift.

Based on Sodra data, the average retail wage before tax was 435 this October. The whole price of one such job would be some 570 euro per month, 2.5 full time positions would cost the company some 17.1 thousand euro per year.

As such, roughly counting, the self-service checkout repays itself in at most two years. That said it has been observed that customers are more inclined to attempt to cheat self-service checkouts more than regular cashiers. Thus there is potential for losses due to theft.

Rimi acquires IKI: What changes are to be expected in retail market? (1)

On Friday morning it was officially confirmed that two major Lithuanian retail chains are merging –...

Lithuania's Prime Minister Saulius Skvernelis disagrees with the proposal made by their coalition...

Leftist manifesto: life would change for both employees and oligarchs