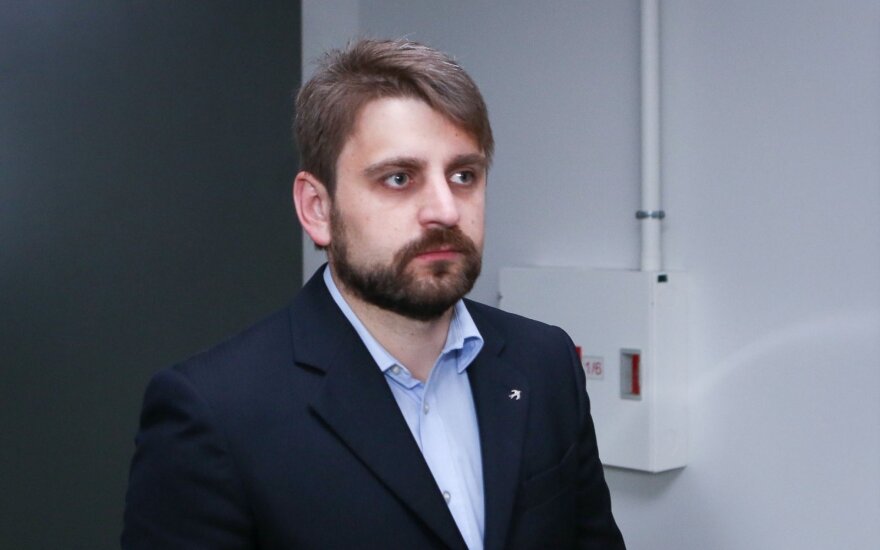 Having typically gone hand in hand the Lithuanian Republic Liberal Movement (LRLS) and the Homeland Union – Lithuanian Christian Democrats (TS-LKD) have been finding it ever harder to find common ground. The Liberal’s unwillingness to be “dragged” around by the Conservatives expressed already after the Seimas elections and public disputes have resulted in an unsuccessful pursuit of choosing an opposition leader. This week a scandal occurred in the Vilnius city municipality due to city council member Vidas Urbonavičius potentially abusing his authority, Alfa.lt reported.

“The Liberals are not the Conservatives’ cheerleaders”

“Looking at politicians’ discussions of coalition formation, some may believe that the TS-LKD is advocating for the Liberal Movement or that we are rushing toward a coalition with the Peasant-Greens. G. Landsbergis is presenting such an opinion unilaterally and there has not been any agreement or request to represent the Liberals,” one of the LRLS’ leaders Gintaras Steponavičius posted on Facebook during the post-election coalition forming turmoil.

Vilnius Mayor Remigijus Šimašius also contributed, stating that the Liberals are not planning to cover the Conservatives from “dangerous viruses”. Gabrielius Landsbergis who was unwilling to join a coalition without the Liberals attempted to calm the situation, everyone presented a position.
Political scientist at Mykolas Romeris University Rima Urbonaitė saw this situation as fairly comical, but agreed that these were the first sparks of conflict between the two parties.

“The Liberals chose to state in a fairly strong tone, to avoid any doubts, that they are not the Conservatives’ cheerleaders, that they are independent. For them it is equally important to form their own clear identity, to find their individual path, rather than be the Conservatives’ junior brother, something that G. Landsbergis attempted to portray through negotiations,” the expert observed.
R. Urbonaitė also reminded that disagreements also arose when attempting to elect and opposition leader. With three months gone after the elections, one has yet to be chosen.

“The situation in the municipality shows a fairly acute conflict. Both Mayor Šimašius and his team, as well as the Conservatives have things to say about one another and are definitely not staying silent,” the political scientist said.

The Liberals are urging conservative V. Urbonavičius to resign from the capital’s council due to suspicions that he has potentially used political pressure in order for his child to enter one of Vilnius’ kindergartens. The politician refuses to do so and together with fellow Conservatives is expressing clear dissatisfaction with the Liberals.

After the municipal elections, the capital’s municipal council majority was formed by the Liberal Movement, the Conservatives, the Social Democrats, List of Lithuania and Order and Justice, which withdrew from the coalition, but is not in the opposition either. The coalition currently holds 31 of the 51 mandates in the capital’s council. The majority of the 31 are Liberals (15 mandates) and Conservatives (8 mandates) among who there is currently clear tensions.

Prior to the conclusions of an inquiry, the political scientist is unwilling to hazard a guess as to how the incident will conclude, but stressed that the foundations of the capital’s coalition government are wavering.

“Though it is a coalition government, it appears that there is little goodwill and collegiality in it. There are clear sparks and they are definitely not prepared to pander to one another, nor negotiate, nor cover for one another,” R. Urbonaitė described the current circumstances in the coalition.

The expert noted that the accused V. Urbonavičius along with his Conservative colleagues are not sitting idle – they are publishing colleagues’ letters, point out how principled they were prior to certain procurements costing in the millions of euro.

“It is currently hard to find the real truth, but that there is a lack of transparent and clean politics in not only Seimas, but also the municipalities is more than clear,” said R. Urbonaitė.

Being pressured to resign even before the conclusion of the inquiry, Vilnius council member V. Urbonavičius appears to be unwilling to do so. Mayor Šimašius has yet to receive the conservative’s resignation and doubts it will arrive any time soon.

“Knowing him, I doubt he will do it at all. He has constantly preferred to fight with anyone and about anything. He has a very categorical opinion which can sometimes be very odd,” R. Šimašius told the Alfa.lt news portal on Thursday.

The mayor views the current situation as particularly unpleasant, but sees it as a problem of a single individual and would not venture to question the coalition’s future.
Meanwhile the Conservatives stated they wish to hear the conclusions of the inquiry and only then make conclusions.

“I am not going to make any rushed conclusions. We requested an impartial inquiry of the city administration which should show whether there was political pressure, whether there was interference. Then, when we receive the conclusions, we will review them and act with integrity. I believe that will be the case in both our party structures and the city council itself,” said former council member conservative Mykolas Majauskas.

The Vice Mayor V. Benkunskas of the TS-LKD, being placed in the middle of the scandal, had little to say about the coalition’s future, but stressed that he is most concerned with the tasks at hand.
“Such unexpected backstabbing does not contribute to trust or a good atmosphere, but as I said before we are no family, we are politicians with a coalition agreement for specific tasks. Our group has clear commitments for the heating infrastructure and education, thus I put emotions aside and try to do the tasks I am committed to,” the vice mayor told Alfa.lt.

The question of benefit in the future of the Vilnius coalition government was also stressed by political scientist Urbonaitė, who pointed out that the Conservatives have to base their decision whether they wish to remain in the coalition on rational calculations.

“A question of benefit arises here, where every action is made based on the currency of benefit. If the Conservatives see benefit in it, perhaps they will do so, but I do not see any specific benefit in it other than creating chaos and attempting to show character, they would risk to lose a great deal,” the expert explained.

While the Conservatives are likely to swallow the bitter pill this time, R. Urbonaitė recommends to not forget that currently politicians are definitely unpredictable.

Corruption in the Vilnius Municipality?

Alfa.lt reminds that this week information was revealed that Vilnius council member Vidas Urbonavičius of the TS-LKD may potentially have put pressure on certain individuals and succeeded to have his child placed in a certain kindergarten in the capital.

Vilnius Mayor Remigijus Šimašius told journalists on Tuesday that he found out from his advisor Povilas Poderskis that the kindergarten admission system had been overridden – one group had more children placed in it than it fit. Due to this the children’s’ parents were offered to move their offspring to older groups in order to make space for V. Urbonavičius’ son in the necessary group. The municipal Liberal Movement group decided to call upon the municipality Education department to review and amend the harm made due to the breach, as well as the Ethics Commission to review the politician’s actions and their results, also urging V. Urbonavičius to not wait for the inquiry results and resign.

Vilnius vice Mayor Valdas Benkunskas poured moil oil onto the fire by publishing colleagues’ correspondence which reveals that this is not an event without precedent and more children were accepted into kindergarten groups than hygiene requirements allow as constant practice that Vilnius Mayor R. Šimašius was aware of.

The vice mayor also stressed that due to this incident he has contacted the municipal controller and Internal Audit department for an independent investigation.