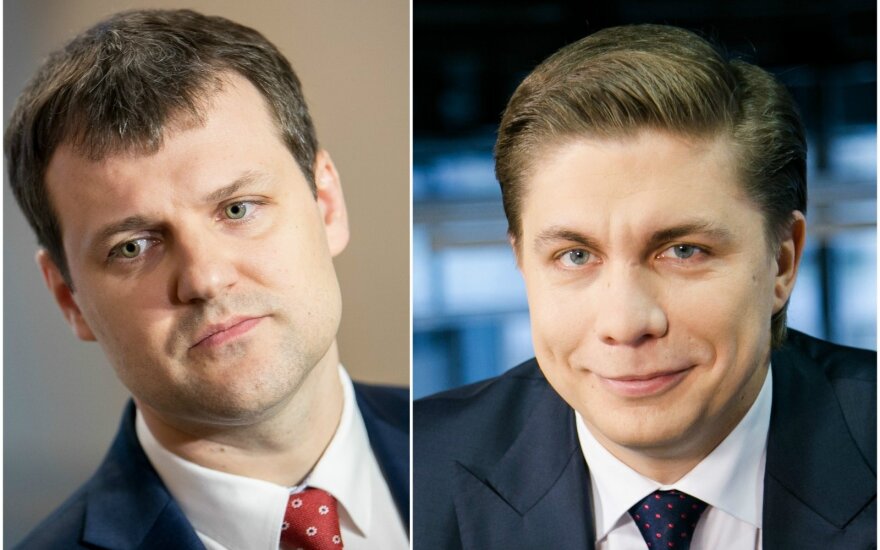 This was stated to LRT.lt by M. Sinkevičiaus who determined to lead, who is the opponent in the second round of the election to Gintautas Paluckas. In turn, G. M. Sinkevičius compared G. Paluckas with Moses, who “for years guided people waiting until the old generation died, and then they will be able to go to the Promised Land."

Related articles
Do the old Social Democrats get scared of Paluckas' coup?
PM - by communicating with the other party leaders, new political tradition is created

The second tour for Lithuanian Social Democratic Party (LSDP) President will be held on April 20-22 in party divisions. Among the competitors: Vilnius Deputy Mayor G. Paluckas and Minister of Economy M. Sinkevičius. During the first round of these politicians received only a few hundred votes, while approaching the final battle for the party chairmanship candidates rhetoric is sharpening and the position are highlighted in regards to of where the LSDP (Lithuanian Social Democratic Party) should be steered.

Explains the difference between the two

G. Paluckas, when speaking about the fundamental differences between him and M. Sinkevičius, compared him with the last Social Democratic leader A. Butkevičius.

"M. Sinkevičius – is considerably more moderate than me, he would like to keep a lot of things similar to A. Butkevičius - mild changes. When communicating with party members, I realized the need for a holistic change in all areas. Our first echelon of the party must change at least three quarters. And I am talking about the board, the deputy corps. This is the face of our party, culture and traditions. At the time, M. Sinkevičius speaks of maintaining the core "- compared G. Paluckas.
In addition, as explained by G. Paluckas his rival has repeatedly said that he the party sees as a state.

"I say that the only state parties are in Russia, Korea and China. I see party as a left-wing movements of consolidating power. Organizations can realize their political positions, which coincide with the social democratic ones. It must be an open structure, involving not only the party members, but also left-wing organizations and academic resources, which Lithuania has many and they are not able to realize themselves politically. Because of its insularity we lose the roots and do not have public support. I have a feeling that M. Sinkevičius sees it a lot more closed, "- taught G. Paluckas.

In turn, M. Sinkevičius heard G. Paluckas claims about leftist forces pooling and said to LRT.lt that G. Paluckas copied his idea: "He did not make leaflets, but my own but state that I would like to mobilize a broad leftist alliance. I say that the Left has to represent not only the Social Democratic Party, but have connections to other movements – non-party ones; the Left is in favor of academic people in the world. I dare say it - coincidence or a use of my idea."

When speaking of the party as the state, M. Sinkevičius had in mind that the Social Democratic Party is the country's statehood significant party. "I want it, like the Conservatives, it would be significant developments of state," - explained M. Sinkevičius.

In addition, the Minister of Economy emphasized that he never said that he is going to leave the same members at the top of the party.

"There will be change and more than half of the people will be new. In other words, more than half of the deputies will change. I am talking about the political team that is closest to the Chairman of the Party - deputy, Presidium members; to create novelty and continuity. G. Paluckas here is perhaps somewhat more radical, proposing three quarters. However, G. Paluckas is trying to portray himself as Moses, who is guided people for 40 years while waiting, until the old generation will die and they will be able to go to the Promised Land. Apparently, he wants to reduce the older generation and the reduction of the so-called nomenclature in two years. However, the Parliamentary group is hard to change and you will have to work with what you have ", - said M. Sinkevičius to LRT.lt.

According to M. Sinkevičiaus they will be looking for new leaders, but radical changes in are hardly possible. "I am a moderate and not for the revolution. I support evolution, consistent way of modernization and renewal, "- taught M. Sinkevičius.

G. Paluckas want to reform the party and upgrade it to a whole different positioning and M. Sinkevičius - moderate and try to maintain the status quo, says political analyst Virginijus Savukynas to LRT.lt.

"These two politicians are going with such knowledge. The question is which ones are acceptable for the Social Democrats. Updates and renewal sound very nice, but sometimes it can result in weakening the party and decomposing, because radical changes caused by huge opposition, the party starts to sink, talking about their the relationships, rather than searching for their constituencies and presenting ideas and while fighting for projects, "- commented V. Savukynas.

However, the analyst wonders whether G. Paluckus would succeed in the implementation of the reforms that he talks about. "G. Paluckis radical rhetoric could attract protest votes, but if he became chairman, it is unlikely that he will succeed in implementing major reforms. He is young, does not have much support. While to updating of party leaders is absolutely necessary, because this is the only way he can concentrate on his team, which would show support, "- said V. Savukynas.

According to V. Savukynas, Social Democratic Party members have to decide what the Social Democrats need. "You can go back to the origins of social democracy, what is said by political scientists. This can be done in a revolutionary way, as proposed by G. Paluckas, or step-by-step, according to M. Sinkevičius ", - said LRT.lt analyst.

Current Social Democratic Party leader A. Butkevičius did not pursue re-election, stating the party failure in elections. He says that he predicted that the President of the Social Democratic Party in elections would require a second round, and that precisely these two politicians would meet. "Both are young, energetic, beautiful, and fresh. I think there won’t be a difference because they are both clever, wise people with considerable political experience ", - said A. Butkevičius.

The final election results and the new party chairman will become clear on May 2nd, but his work will begin May 6th through LSDP Congress.