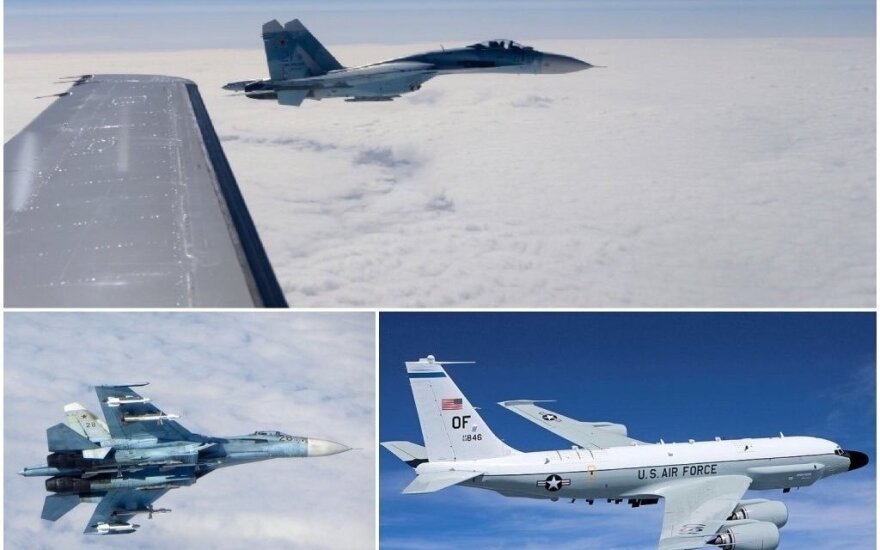 "The unsafe and unprofessional actions of a single pilot have the potential to unnecessarily escalate tensions between countries," US European Command spokesman Danny Hernandez said.

Russians quickly responded that there was nothing aggressive about the incident which occurred last Thursday. The Russian fighter was reportedly scrambled to escort a high-speed unidentified target away from Russian borders.

The laconic accounts of the incident coming from the US and Russia can leave many wondering what happened exactly and why it matters.

The incident that occurred over the Baltic Sea last Thursday could have ended tragically. Pentagon spokeswoman Laura Seal has explained that the American RC-135 aircaft was flying along a pre-arranged route in international airspace and did not cross into Russia's airspace. It was unexpectedly approached by a Russian Su-27 fighter which performed an "irregular barrel roll", circling around the American aircraft.

This was a dangerous manoeuvre, the United States said, which posed unnecessary danger to the crews of both planes.

Why was it a bad interception?

One could argue that the Russians were in the right - the fighter intersected an American aircraft which was flying towards Russia's border. Some could even suggest shooting down the plane was justified.

Wrong. An unjustified downing of an aircraft could lead to retaliatory actions, most likely a military response. Moreover, the American plane was flying in international airspace where its presence was perfectly legitimate and did not violate any international agreements.

Russian aircraft are flying in international airspace regularly and get intercepted by NATO jets every week. The difference is that the interceptions by NATO or neutral countries - Sweden or Finland - are performed in a civilized manner, without provocative or dangerous manoeuvres. The crews attempt to contact the Russian planes, sometimes Il-20s used for reconnaissance, and escort them away from their borders.

Moreover, Russian bombers Tu-95, Tu-22M and Tu-160 regularly approach the borders of NATO countries: Norway, the UK, even the US. None of the jets of these countries performed anything as dangerous as the Russian Su-27 actions last Thursday.

Even if the American RC-135 was close to the Russian border, there was no direct threat of violating Russia's airspace and the response was inappropriate. Not to mention that it violated a 1972 agreement between Washington and Moscow to refrain from irresponsible and provocative manoeuvring.

Should the Americans have reacted?

Does this mean that the Americans should have downed the Russian fighter, much like the Turkish forces did last November?

Hard to say. US Secretary of State John Kerry, commenting on an earlier incident last week when Russian Su-24s performed several close flybys over the Donald Cook warship in the Baltic Sea, said that the Americans would have been within their rights to shoot down the Russian aircraft. But words are one thing and actions are something different.

Americans have the right to react to dangerous, unprofessional and rowdy behaviour of Russian pilots. However, the RC-135 could not shoot down the Russian jet simply because it was not equipped to - it is a slow unarmed reconnaissance plane.

Moreover, shooting down an aircraft is an extreme decision that should not be made before careful weighing of risks and circumstances.

For instance, when a Turkish F-16 shot down a Russian Su-24 last November, it followed a number of incidents of Russian aircraft violating Turkey's border from Syria. When the Russian fighter did not respond to repeated instructions to change course, the Turkish pilot shot it down over Turkish territory.

Russia reacted tempestuously - with economic sanctions, propaganda offensives and even deployment of S-400 anti-aircraft systems, but there was no retaliation such as the downing of a Turkish plane. In a way, that could be construed as silent recognition that the Russian aircraft violated Turkey's border.

Meanwhile the incident in international airspace above the Baltic Sea would hardly warrant the Americans firing a missile. They would be risking escalating the tensions between the US and Russia and similar provocations could lead to escalating clashes.

Why is Russia doing it?

Some analysts, especially those echoing Moscow's positions, argue that Russia's aggressive actions are a logical response to NATO's growing presence in the Baltic Sea region. The Kremlin has warned time and again that it will respond properly to the allegedly unjustifiable strengthening of NATO forces.

Moreover, Russian troops are justifiably annoyed when an American reconnaissance aircraft is circling near Kaliningrad and is able to pick up their signals.

In the West, Russia's actions are explained with references to the Kremlin's propensity for projecting power, especially in the Baltic Sea which Russia is used to seeing as its backyard.

For instance, the Russia expert at Pentagon, Mark Schneider, thinks the Kremlin's provocations are an attempt to inspire fear in potential adversaries. Moreover, a lot of it is intended for domestic consumption. Kremlin channels and online portals had a field day trumpeting "successful actions by brave pilots" and "chasing away cowardly Americans" from Russia's borders.

However, besides flexing their military muscle, the Russians might have other objectives in mind, like training pilots to intercept NATO planes. This allows Russia to brush up its tactics and analyse NATO's actions and response times.

In recent years, Russia has been actively using its traditional tactic of taking incremental steps in pressuring, provoking and threatening its rivals with all the means at its disposal.

Moscow does so until it meets any resistance, at which point the Kremlin starts spitting out bitter statements and either backs down or blackmails the other side into accommodating it in exchange for de-escalation.

The time is right now since the Alliance is calling the NATO-Russia Council after a two-year break this month. The council could be used as a hostage by including the Baltic Sea incidents into the meeting's agenda.

How will it affect Lithuania?

Putting the possibility of air collisions aside, there is a risk that some voices within NATO will start saying that the US should refrain from provoking Russia, that is, not conduct reconnaissance flights or send warships to the Baltic Sea. If the Alliance adopts a more peaceful posture, they might argue, Russia will back down, too, and similar incidents will be avoided.

However, with dividing NATO and derogating the Alliance's forces being the Kremlin's express goal, the opposite is likely to happen. The occupation of Crimea has triggered a radical shift in NATO's attitudes towards Russia, so even if the relations are renewed, Moscow will be viewed with more suspicion than before.

The US could do something similar - sending fighter jets to accompany its reconnaissance planes. Unlike the RC-135s, which are big and slow, but can carry much fuel with them, fighter jets would have to refuel in the air and be supported by a network of bases.

The US has already mentioned plans for deploying new reconnaissance aircraft to Sweden, but General Philip Breedlove, the outgoing NATO commander, has also intimated that the NATO air policing base in Zokniai, Lithuania, could be reorganized into an air defence mission.

During his visit in Vilnius, NATO Ambassador Douglas Lute has also spoken about the possibility of using NATO air policing jets for air defence in case of a crisis. This would mean that NATO fighters stationed in the Baltic states could perform military tasks. Eventually, this would mean more US air force planes in Lithuania and greater American investment.

Photo of the week: Close encounters (1)

This striking photo of a Russian SU-24 attack jet passing within metres of the USS Donald Cook in...