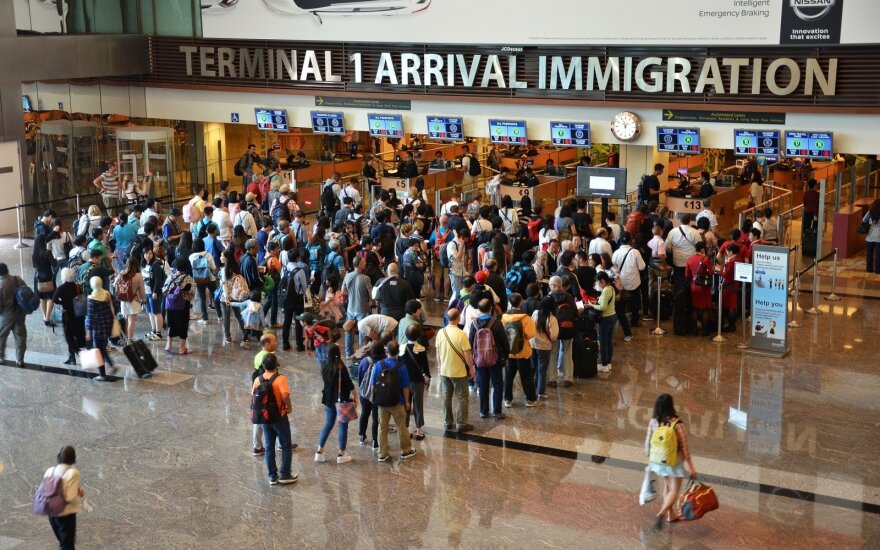 “There might have been one time when I considered having the citizenship of both Lithuania and Norway” – said philologist and translator Algimantas Kušlys, who has been living in Norway for thirty years and up to this point only has the permission to live and work in the country. He stated that he doesn‘t feel any discrimination even though he is not a citizen of Norway. However, he and other emigrants that LRT.lt, who manage with only Lithuanian citizenship, think that the emigrants should have a possibility to have a dual citizenship.

“It’s like going in circles” – smiled Dalia Henke, who is the chairwoman of Lithuanian World Community, when she commented on the increased activities of politicians, who focus on the legalization of dual citizenship in Lithuania. Lithuanian, who lives in Germany, has confirmed the old talks that other Lithuanians who have emigrated are waiting for the day when there will be a law allowing to keep Lithuanian citizenship if they have one in a foreign country as well.

The President Dalia Grybauskaitė, specialists of Constitutional law, and some Parliament members are sure that these citizenship amendments that are initiated by the Conservatives, would go against the Constitution. The only way to legalize dual citizenship is through a referendum, where the majority of emigrants that have the right to vote would have to participate.

So far the possibility to have a dual citizenship is given only by exception.

“We’re happy that there is political will in Lithuania, that the majority politician in the Parliament and leaders of the state (Prime Minister Saulius Skvernelis and chairman of the Parliament Vytautas Pranckietis – LRT.lt) began their attempts to legalize dual citizenship as soon as possible. This was affected by the “Brexit” procedure that began at the end of march, which is difficult for Lithuanians that live in the United kingdom (UK). That is because they have a short window to decide to either keep Lithuanian citizenship or refuse it and get citizenship of the UK” – spoke D. Henke.

Emigrants do not want a referendum

Both D. Henke and the vice-chairman of Washington’s Lithuanian community Rimvydas Baltaduonis, alongside others, who were interviewed by LRT.lt, all stated that it is useless to arrange a referendum for dual citizenship as its failure is pre-programed.

This is confirmed by the most recent statistics as well, which states that emigrants, who have the right to vote, tend to avoid going to elections. Even though there are more than 300 thousand emigrants.

Last year, 19 207 emigrants expressed their wish to participate in parliamentary elections but only 16 411 showed up.

“The conditions to participate in the elections, which are stated in the Constitution, are simply not there. However funny it sounds, some Lithuanians living in further regions of Australia are still waiting for their letter, which gives them the right to vote. There are Lithuanians not only in London. In some places there are no possibilities to vote, as the current Election law is unfavorable to Lithuanians living abroad” – explained D. Henke.

She herself, cannot participate in the election as she does not have Lithuanian citizenship, because she left Lithuania after 11th of March in 1990 (those, who left after this date, lost the possibility to have dual citizenship – LRT.lt).

D. Henke is sure that, the participation of emigrants in elections would increase if there was a safe and anonymous electronic voting, which is not yet legalized.

D. Henke first mentioned that there are people that want to come back and that it would keep the connection to their homeland alive, when talking about the circumstances that keeps the dual citizenship question alive.

“After ten years spent in Germany, those who pay the taxes, get a letter offering to become a citizen of Germany. This is done in a country with 84 million citizens. Maybe there will be a time when Lithuania will do the same, when it has 3 million or less citizens?” – wondered D. Henke.

Only once did he regret not having a Norwegian citizenship

“One citizenship is more than enough for me. Only once did I think that it would be useful to have not only Lithuanian but also Norwegian citizenship” - said philologist and translator Algimantas Kušlys, who has been living in Norway for thirty years and up to this point only has the permission to live and work in the country.

He noticed that everything became easier after Lithuania became the member of EU and the Schengen zone.

“He doesn‘t feel any discrimination even though he is not a citizen of Norway. I can participate in local elections but not in the Parliament elections. However, I will stay a citizen of Lithuania, no matter how many citizenships I am allowed to have” – admitted A. Kušlys.

“I am Lithuanian. I and my kids, who were born in Lithuania, don’t need a German citizenship. However, my grandson, who was born here, is going and will be going to school for a long time, does” – Algis Lunskis, who has been singing in the theatre of Bona opera since 1996, talked about his family.

He felt sorry that his grandson, whose father is a Turkish citizen and his mother – Lithuanian, did not get a Lithuanian citizenship.

“My grandson visits Lithuania sever times every year, has a relationship with family members that live there and will have close ties to Lithuania, but the attempts for him to have a Lithuanian passport were in vain. We crossed many hurdles but did not achieve anything” – A. Lunskis did not hide his displeasure.

According to him, if his grandson could become a Lithuanian citizen, he could think of a future with the homeland of his mother and grandfather. Now this opportunity was taken away as soon as he was born.

“Why is citizenship made into something sacred? Emigrants, who express no desire to be Lithuanian citizens, are not forced to do. Why take away this possibility from those who do? Even the Jews that are spread all over the world are still the citizens of Israel! Is it more important to give citizenship for working immigrants than those who treasure their homeland. I think that Lithuania should prioritize getting back and keeping their citizens, because people are the biggest treasure“ A. Lunskis is sure of this.

He and his whole family, while living in Lithuania, did not miss any elections and would not miss the referendum for dual citizenship.

Would not want to lose her roots

“I would definitely go to the referendum and vote for dual citizenship. All of my friends would participate as well” – said Rasa Pranckūnaitė, who has been living in the united states for the last thirty years.

At this time she has the “green card” and already has a right to US citizenship. However, emotions get in the way of refusing Lithuania’s citizenship.

“As soon as I found out that I can get US citizenship, I became very sad. I know that if I took it, I would lose my Lithuanian citizenship, which I do not want. My Lithuanian roots might be cut off and I might lose a part of myself. I sometimes think that it would be nice to come back when I am older, buy some land, and build a house” – admitted R. Pranckūnaitė.

Emigrants are spooked by referendum statistics

Žygimantas Pavilionis, a Conservative Parliament Member, who was elected in the district of Vilnius, where many emigrants are voting, stated that emigrants are vary of the dual citizenship referendum because of the statistics of previous referendums.

The last referendum in Lithuania was about the membership in the EU and took part in May of 2003.

“It was successful because of the unity of all the parties, Parliament Members, politicians and even the church. The experience of other referendums is bitter. And this is what scares the emigrants. That is why they are asking to lower the bar for a referendum. However, this decision is dangerous in his opinion, when we know about the brainwashing that the Kremlin does in Lithuania” – said Ž. Pavilionis.

Ž. Pavilionis, when evaluating the emigrant participation in the elections, stated that fear might be a major factor because most people, especially in the USA, are living illegally. If they came to vote, their status would come to light and they would be deported immediately.

“Now the time is critical, when many emigrants are thinking whether to keep their Lithuanian citizenship or to get one from a foreign country and lose the Lithuanian one, or whether to do something else in order to legalize their life abroad. That is why we must neutralize the tension as soon as possible” – Ž. Pavilionis, who has been an Ambassador to the US and maintains close ties with Lithuanians in the US, is sure of this.

Amendments to Lithuania's Law on Citizenship will be submitted to the parliament for approval, but...

V. Radžvilas: a disaster has come already and we can‘t hide it

Benefits of Lithuanian citizenship from the South African Litvak perspective (1)

“ South Africa is more Litvak than Lithuania itself,” Markas Zingeris , the Lithuanian...