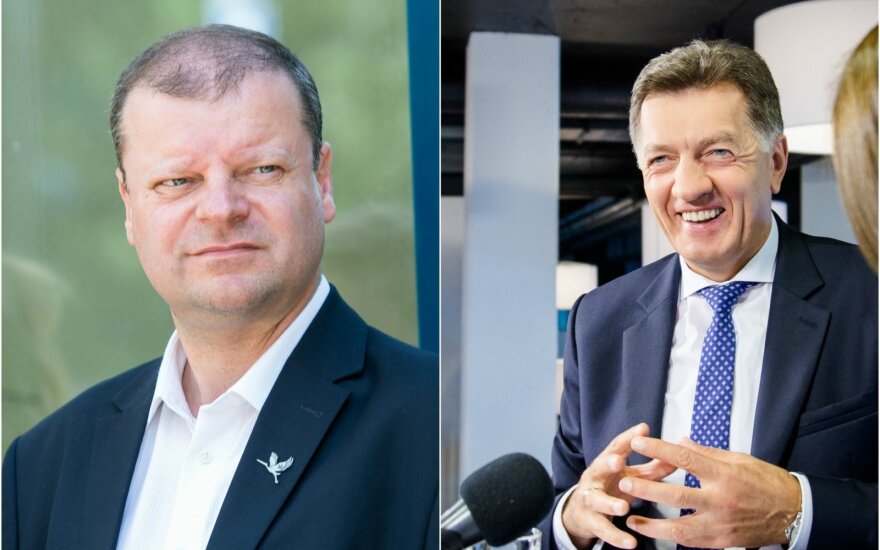 If the Lithuanian Peasant and Greens Union (LVŽS) formed a coalition government with the Lithuanian Social Democrat Party (LSDP), it is possible that the latter would disappear as a significant party after next election political scientist Mažvydas Jastramskis told LRT Radio. Political scientist Bernaras Ivanovas disagrees, adding that the likelihood that the “Peasants” will attempt to make a deal with the Social Democrats, rather than the Conservatives (TS-LKD) is greater.

According to Vytautas Magnus University (VDU) docent, political scientist B. Ivanovas, the LVŽS victory in the Seimas elections was not only impressive, but also very likely already after the first round. According to him, already then the party’s results were fairly stunning.

“Something else became apparent then as well – Ramūnas Karbauskis and Saulius Skvernelis’ support gave a great push for even lesser known politicians in competing even with veteran politicians. On one hand it can appear cardinal, but we have to take into account the disappointment of society and unwillingness to vote for the parties already in power,” highlighted Ivanovas.

Vilnius University Institute of International Relations and Political Science (VU TSPMI) political scientist M. Jastramskis is, however, convinced that we should not hurry to evaluate the results of the election because we still do not know who will form the coalition government and what policies it will take up.

“Overall, won’t it be that we will need a repeat election? It looks like the formation of a cabinet may be very difficult, no-one is overly enthused about partnering with the “Peasants.” At least that is what initial indicators suggest,” mused Jastramskis.

According to the expert, the LVŽS earned this many votes in the second round for a simple reason – the party led as the second choice for voters. As such with some of the other parties failing to enter the second round, the voters turned to the LVŽS.

“It appears that in the second round Conservative and Liberal voters voted for their own parties, but this was not enough. Over four years the Conservatives failed to cancel out the distance between them and their voters which was established during their last term. People who support neither the Conservatives, nor the Liberals, came to the second round and most likely chose the “Peasants” because they appeared as the most suitable alternative,” concluded Jastramskis.

On Karbauskis’ statement that he sees little difference between the Social Democrats and Conservatives in terms of forming a coalition, B. Ivanovas believes that the politician is not being honest because in the end there is a difference.

“This is regarding not only the difference in core values (which is obvious), but differences in working within the coalition. I believe that in seeking points of contact and commonalities, the “Peasants” will have more problems with the Conservatives. I would see a smaller chance that Karbauskis would deal with the Conservatives and a larger one when dealing with the Social Democrats who received less trust from the voters,” said Ivanovas.

According to the expert this would allow the “Peasants” to have firmer positions and more actively express their opinion. “I believe this is exactly what they want. They want to govern Lithuania, have their own political line. I do not believe the Conservatives would allow this. Such a situation is fairly clear,” Ivanovas assured.

M. Jastramskis holds a different opinion. According to him, these elections once again demonstrated that Lithuanian voters lack stable political beliefs. Thus, according to him, predicting the conclusion of elections is better left to clairvoyants looking at tea leaves than to political science experts.

“I’m not very willing to firmly predict a specific coalition composition. I’m sticking to my opinion that the most rational choice for the state, for the “Peasants” and for other parties is a coalition between the “Peasants” and Conservatives. Regardless of anything, most people voted for either of these two parties, opposition parties,” stated Jastramskis.

He also highlighted that if the “Peasants” form a coalition with the Social Democrats, LVŽS members would have more incentive to depart the party and defect to the coalition partners.

B. Ivanovas agrees that if the “Peasants” form a coalition with the Conservatives, there would be fewer reasons to defect for party members, but the Conservatives would prove too strong in such a coalition. “I believe this could discourage Karbauskis. Whatever they are, the Social Democrats are weaker here,” he noted.

M. Jastramskis believes the Social Democrats need to rest. “A stable majority is needed. […] The matter of the fact is that no party, which gains popularity this rapidly manages to avoid a certain fragmentation. It is an empirical fact. Another thing – no matter what the coalition becomes, with the Conservatives, the “Peasants” would have almost a double lead,” said Jastramskis.

Ivanovas believes that the Social Democrats lost the elections for a simple reason – voters voted in protest. “Yes, it was an expression of opinion on the Labour Code. People didn’t go protest, they chose to go to the elections and express their opinion. The Social Democrats, being in power, risked more than any opposition party, who could just sit back and criticise,” stated Ivanovas.

Reminds not to forget the influence of Special investigation Service

B. Ivanovas claimed that psychological aspects will be significant when forming a coalition. “Psichologically the Conservatives are better prepared than the Social Democrats in this case. The latter are clearly somewhat broken down. Of course not for long, I believe their spirit will recover and they will fight back,” assured the political scientist.

Jastramskis is not so sure, stating that “I think that spiritual preparation should be left to spiritual leaders. Everything will be decided by calculations. […] The Social Democratsn really need to enter the opposition and present [new] leaders, […] if they want to remain a leftist party for the next Seimas election and exceed the 5% barrier. If the Social Democrats decide that they have to enter the coalition no matter what, that such a coalition is necessary, then I believe a very likely scenario is that the Social Democrat Party will simply cease being a party of any significance in the Lithuanian political system.”

Nevertheless, Jastramskis argues that Lithuania has a tendency that voters vote for parties that were not in the coalition government. “You look at the results of prior elections and one thing becomes clear – Lithuanians vote strongly against the incumbent government. This proved to come true in this election as well. Whatever the new coalition will be, in the next election it will still not earn a third or a quarter of the vote. What its form will be, how many parties it will lure in from one or another fraction, that is already secondary,” stated Jastramskis.

According to Ivanovas it is necessary to look at other aspects that could impact the election, for example the factor of the Special investigation Service (STT). “Though society doesn’t trust much in, as we’ll see, state performed operations, the Conservatives still regained their leading position. There are many nuances, which are hard to evaluate,” said Ivanovas.

ELECTIONS. Trap for the Social Democrats

Social Democratic Prime Minister Algirdas Butkevičius has failed to win a MP seat in his...