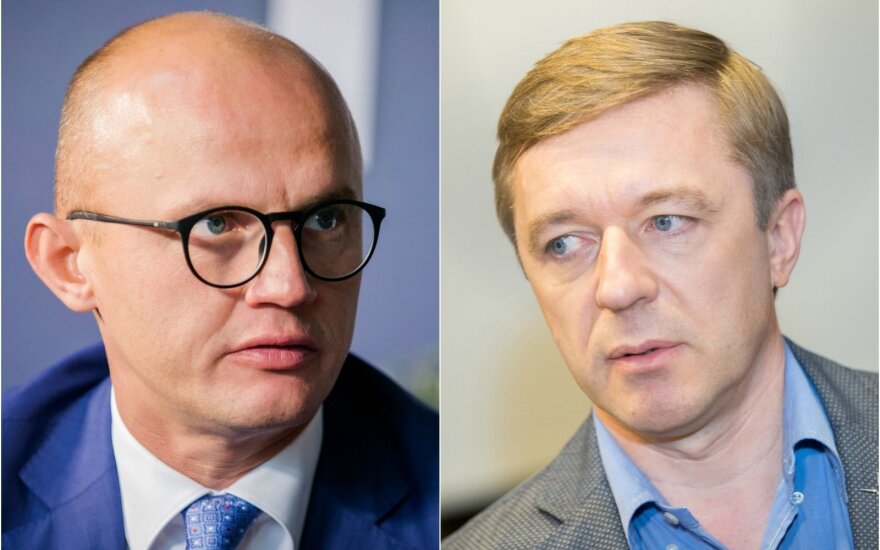 E. Jakilaitis explains that this is untrue and presented his own questions to R. Karbauskis on Facebook.

"Transparency and fairness in the state. Right from the start of the elections we have been talking about how the shadows have no place in the country, there are and cannot be any double standards, we are seeking for all institutions, particularly those owned by the state and subsisting on tax payers' money for now only laws to be obeyed, but also to operate based on a strict system of honesty and values. You saw what happened with Lietuvos Geležinkeliai? Our cabinet managed to do what others dared not because nepotism and corruption was deeply rooted in this company. Difficult times await other companies that are not operating transparently and they know it.

Quite recently a group of members of Seimas called upon the LRT council to present information on the use of budgetary financing received by the LRT. When answers were presented, a number of new questions and doubts arose. For example the Centre of Registers presents data that three companies linked to LRT show host Edmundas Jakilaitis received more than 2,5 million euro income over the year 2016, while oaying 0,3% in tax (7752 euro). Until further data is presented, it is impossible to ascertain what part of these companies' income was received from LRT.

Another example: UAB TymDrym had an income of 600 thousand euro in 2016 and a net loss of 17 thousand euro, while the average wage only reaches 400 euro according to rekvizitai.lt. There is a company which creates a show for LRT, whose financial report for the year 2016 has not even been presented to the Centre of Registers. Even more, in ten production companies which create shows for LRT, there is employee counts of only one or two. What capacities do they use to prepare the shows? Why are producing companies signing hundred thousand euro contracts for creating shows if the shows could be created by LRT staff?

The number of questions to the LRT council is increasing because we are aiming for a company that is maintained by the state to not fear to present answers to the public, where the money of the state and all its people is spent, for it to work accountably and transparently.

It is natural that I am not well liked and inconvenient because I raise such questions. But I knew it would be this way when I dared take up the tasks we were delegated to by the voters, the public – to fight corruption, nepotism and ridicule of the people of our country," Karbauskis writes on Facebook.

Soon after E. Jakilaitis released 24 questions to R. Karbauskis, who he states he is unable to get into his show.

"I am not at war with anyone, I am inviting the person to my show, he is not coming, so I am presenting my questions in public," E. Jakilaitis told Delfi. In reaction to R. Karbauskis' post, E. Jakilaitis explained that primarily there is a need to have elementary financial literacy.

"He writes about paid income tax percentage, these are completely different matters, what of various social security, VAT taxes, all other taxation – we pay them equally to all other companies. It is not even worth commenting here, it is nonsense, I would rather not even comment on it publically," E. Jakilaitis stated.

"For a time now I have been unable to get member of Seimas Ramūnas Karbauskis to join my show. Today, based on the Public Information Law, based on legally stated terms I ask him to answer the following questions in writing.

I will be eagerly awaiting answers.

1. When and under what circumstances did companies linked to you become importers of Russian-made fertilisers to Lithuania?

2. How much ammonium nitre or its substitutes do companies linked to you bring in to Lithuania per year?

3. What influence do EU anti-dumping duties have on companies linked to you?

4. Why did companies related to you begin importing "unclean" nitre with several percent phosphorus or potassium residue after the EU implemented anti-dumping duties for Russian-made sodium fertilisers?

5. According to our sources, companies linked to you import 65 thousand tons of various composition sodium fertiliser per year into Lithuania. Can you confirm or clarify this information?

7. Do you believe that the companies related to you avoid paying Lithuania approximately 3,250,00 euro in tax per year by importing "unclean" nitre and thus avoiding the anti-dumping duties on Russian ammonium nitre?

8. Please clarify how much tax was not paid to the state by companies related to you due to choosing to import ammonium nitre mixed with potassium and phosphorus fertiliser?

9. Do you think the European Commission may apply such duties to all Russian-made ammonium fertilisers upon it becoming clear that Russian fertiliser makers and their assistants in Lithuania thought up a scheme to bypass the anti-dumping duties?

10. Do you think the Customs Department and Tax Inspectorate should initiate reviews on potential tax evasion in importing Russian fertiliser to Lithuania? Should investigations also not be started by other state institutions in order to identify the real composition of fertiliser being imported into Lithuania?

11. Mr. Karbauskis, could you describe how companies related to you took over the business of Russian agricultural machinery sales? Perhaps you could identify when, from whom and for how much you obtained this business?

12. What could you recall about the circumstances under which the Ministry of Agriculture led by K. Prunskienė identified cleaning and drying grain equivalent to processing?

13. Could you say what benefits this gave to companies related to you?

14. Could you recount what specific decisions by K. Prunskienė-led Ministry of Agriculture allowed companies related to you to construct grain elevators in Šeduva and other areas?

15. Could you confirm that the Ministry of Agriculture which was led by K. Prunskienė, who was also the leader of the party you were vice chair of, presented application periods so short that applications could only be prepared in time by companies related to you?

16. Did companies linked to you not act together with individuals who organised competitions for grain processing equipment financing at the Ministry of Agriculture which was led by K. Prunskienė?

17. Mr. Karbauskis, could you identify why companies linked to you purchase food wheat, cattle fodder wheat and triticale, but sell mostly only food wheat?

19. Do you think that in purchasing as cattle fodder, but selling as food wheats, the farmers of the country may be cheated?

20. Are companies related to you gaining profits by cheating the country's farmers?

21. Can you detail how fodder wheats and triticale are turned into food wheat?

22. Can you detail how companies related to you took over land from indebted farmers? Please describe the work model?

23. It is possible to own up to 500 hectares of land in Lithuania as your property. Could you specify how much land you, your family members and related legal entities own?

24. How do you think, could a pre-trial investigation be initiated if there are suspicions that an individual was employed fictionally in the Seimas group led by you only so that certain individuals could take their wage?

TymDrym: LRT does not pay us a single cent

Representatives of the company TymDrym have no idea where R. Karbauskis obtained such numbers either.

"We were not financially related to LRT last year or this year: LRT does not pay us a single cent. Last year we organised a Police Day event for the LRT last year based on a competition we won which was financed by the Ministry of the Interior Police Department, also the Lithuanian Municipal Awards – once again based on a competition and the LRT did not pay us a single cent, also the Global Lithuania awards which were commissioned by the Presidential Palace and a charity event on January 13 Kartu Iki Pergalės [Together to Victory].

This year we also organised the Police Day, LRT contributed only on the technical side: we made agreements, but funds were transferred neither from us to LRT, nor the other way round," one of the shareholders of TymDrym, producer Darius Dapkus said. He added he did not know where R. Karbauskis found such figures.

Delfi reminds that several weeks ago the LRT council responded to all the questions members of Seimas sent regarding the Lithuanian Radio and Television (LRT) activities. In answers presented to parliamentarians, LRT presented information about employee wages, LRT leadership wealth declaration and relations to production companies, based on legislative regulations.

However the LRT council explained it was unable to identify individual employee wages and details of contracts with producers due to confidentiality requirements.

R. Karbauskis soon declared that he was not satisfied with the answers presented by LRT and pledged to take further action to obtain the information.

Ramūnas Karbauskis , the leader of the ruling Lithuanian Farmers and Greens Union (LFGU), says he...