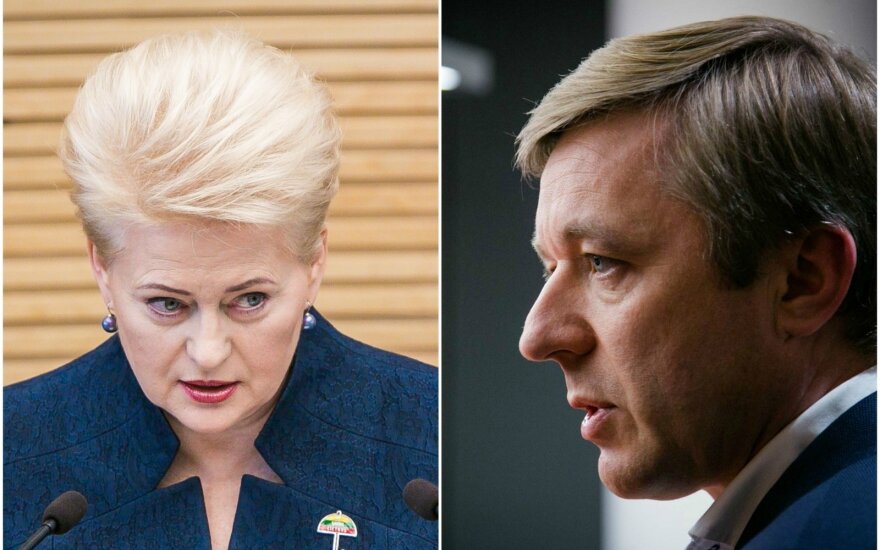 Political analyst Virginijus Savukynas is convinced that "Farmer" leader Ramūnas Karbauskis, who is committed to investigating the peripeties of the "tulip mail" scandal, could in the long term with Seimas elections nearing gain significant political dividends and win the fight against President Dalia Grybauskaitė. Political analyst Virgis Valentinavičius accents that the "Farmer" leader and president are not players in the same political leagues, thus the conflict with the head of state could prove fatal to R. Karbauskis, lrt.lt writes.

Related articles
R. Valatka. The Lord’s first address without a crown
D. Grybauskaitė “burned her fingers”: has the president shed the mask of infallibility?

With the Lithuanian Farmer and Greens Union (LVŽS) leader speaking of the Seimas initiating a new parliamentary investigation, which would target the correspondence between D. Grybauskaitė and former Liberal leader Eligijus Masiulis, the head of state retorted that the presence of R. Karbauskis himself in Seimas as the owner of Agrokoncernas could clash with the Constitution.

This week President Grybauskaitė mentioned in her annual address "forgotten to declare transactions in the hundreds of thousands" and "rampant land appropriation," however she did not directly name R. Karbauskis and his business. A part of the public could have been left with the impression that the president and the "Farmer" leader have buried the hatchet, but R. Karbauskis himself, as if denying this, declared that a new parliamentary investigation must be initiated.

"Bar any especially shocking information about R. Karbauskis that he breached the Constitution and could be impeached, R. Karbauskis will win in such a case, regardless of whether an investigative commission is formed in Seimas or the investigation is started. D. Grybauskaitė's term ends, if I am not mistaken, in 11 months, while the next Seimas elections will only be held in 2020. There is a difference. It is very likely that R. Karbauskis will still be in Seimas when D. Grybauskaitė is no longer president," V. Savukynas stated.

The expert agrees that by entering conflict with the head of state, R. Karbauskis is taking a risk because D. Grybauskaitė, despite fluctuations, remains the most popular politician in Lithuania. However, as V. Savukynas notes, high ratings aren't the most important to the head of the LVŽS right now.

"D. Grybauskaitė's ratings perhaps do grant a moral advantage, but R. Karbauskis is not aiming for the post of president. Why would he need ratings right now? Certainly not. Ratings will matter to him when the Seimas elections will be held in 2020. If he will be the one, who showed how bad things are in Lithuania, what has recently been started, upon ending the NSGK investigation and if a similar investigation is held, during which the president's person is investigated in one form or another, then in the long term such a move could bring benefits to R. Karbauskis," the political analyst stated.

"This conflict could harm R. Karbauskis' ratings in the short term upon failure, but in the long term I certainly do not think that it would bring major negative consequences," V. Savukynas summarised.

Reminding of the consequences of politicians clashing with the president

Mykolas Romeris University docent, political scientist Virgis Valentinavičius is convinced that intending to investigate the actions of President Grybauskaitė, the "Farmer" leader fails to understand that his opponent is significantly stronger.

"R. Karbauskis feels equal to D. Grybauskaitė, but I feel he is greatly mistaken. If we were to compare D. Grybauskaitė's experience over nine years and R. Karbauskis' experience in politics, where in reality he is in government under two years so far, the experiences are very different," V. Valentinavičius told lrt.lt.

The political scientist conceded that the president could employ her authority when opposing the "Farmers", while R. Karbauskis has more weapons in his hands.

"The president specified R. Karbauskis' presence in Seimas as unconstitutional. But she has no capacity to decide on individually the case of R. Karbauskis. The president can deal with the overall problem of excessive business and political links and business abuse of politics, which R. Karbauskis is demonstrating, but for this to happen, the rules of the game must be changed, the legislative base must change. The only thing the president can do is to appeal to public opinion and urge politicians, the Seimas to implement respective legislative amendments," the MRU docent commented.

According to V. Valentinavičius, we should nevertheless not forget what consequences politicians would face following a clash with D. Grybauskaitė.

"D. Grybauskaitė remains the most popular politician in Lithuania, regardless of any fluctuations of popularity. No politician to challenge the president so far has won. Perhaps Saulius Skvernelis was a minor exception, having a little break after a minor confrontation with the president, however now, despite friction, he tries to not clash with the president too much.

The ratings of Algirdas Butkevičius went on a decline when he found the courage, who knows where from, to challenge the president from morning to evening. This ended in a complete rout for him in the elections and the loss of personal popularity. Will R. Karbauskis' clash with the president contribute to his popularity? I believe the answer is unambiguous. R. Karbauskis' popularity has fallen and will fall even further," the political scientist noted.

Vilnius University Institute of International Relations and Political Science political scientist Romualdas Bakutis emphasised to lrt.lt that D. Grybauskaitė likely feels that her political influence will decline upon the end of her tenure as president, thus she will likely not back down to R. Karbauskis easily.

"The participants of the political field will more or less look at how D. Grybauskaitė talks and will be less concerned with how to pander to her because she will soon leave the post of president. She will likely become more akin to Valdas Adamkus, a sort of symbolic president, who may publically preach, but someone, who garners less attention.

As such, D. Grybauskaitė has nothing to lose because she will soon no longer be president and may strike below the belt," R. Bakutis said.

Nevertheless, the political scientist sees other risks on R. Karbauskis' path. According to R. Bakutis, the "Farmer" leader risks to unbalance his companions' unity by opposing D. Grybauskaitė.

"R. Karbauskis is the head of the ruling party, but we see that in the "Farmer" group itself there are rumblings – talks that a number of MPs may depart it. It is also unclear, what R. Karbauskis' final relation to S. Skvernelis is because it has been spoken of before that they disagree at times, those disagreements surface on occasion.

In other words, it would be most realistic to think that the "Farmer" group, R. Karbauskis and S. Skvernelis' friendship are based in pragmatism. Then the question arises, to what extent do they benefit from the conflict with the president, which is likely not some sort of interest of R. Karbauskis, but an ambition. Hence, what is the purpose of satisfying R. Karbauskis' ambitions? The group will back him as long as it benefits them," the political scientist stated.

According to R. Bakutis, the winner in the conflict between R. Karbauskis and the president is difficult to predict because a number of external factors will influence the conflict.

Former companion to R. Karbauskis, now withdrawn from the "Farmer" Seimas group, MP Povilas Urbšys believes that by obstructing the creation of the agricultural sector investigation commission and intending to investigate politicians' links to business and the president's actions, the LVŽS leader may make a fatal mistake.

"This explosion of a political mine will not only cut down the "Farmer" group's unity, but the blast wave may even throw the Seimas into snap elections," P. Urbšys told lrt.lt.

The MP believes that E. Masiulis and D. Grybauskaitė's correspondence investigation will have no yield: "Perhaps the president's facade will politically be a little frayed, but the ramparts will not be taken."

According to P. Urbšys, the "Farmer" leader has not only declared war on the opposition Conservatives and president Grybauskaitė, but has also opened up another front.

"We can see that R. Karbauskis also has had a third front open in the Seimas itself, within the "Farmer" group. It is a sort of war against everyone," P. Urbšys stated, noting that such a war could cost R. Karbauskis.

"R. Karbauskis is as if seeking to have his enemies unite against him. By clashing with the president, he is aiding the Conservatives gain a strong ally in this war. It is evident that the president is already forming her defensive tactic by emphasizing that R. Karbauskis himself is a business man and wishes to exploit his political powers to gain more influence on politicians," R. Karbauskis' former comrade warned.

R. Valatka. The Lord’s first address without a crown

D. Grybauskaitė “burned her fingers”: has the president shed the mask of infallibility?

Bruveris: the president is no different from the denizens of the political jungle

Public relations experts: it is time for Grybauskaitė to reveal what she knows