Edmundas Jakilaitis
aA
“I hope that Kaunas will not declare independence from Lithuania. But such a trend exists looking more broadly at what is happening in Lithuania. The entrenchment of certain groups, which could call themselves parties, committees, parishes or such. In reality, all those committees are small local parties making political deals, sharing power and opportunities, sometimes they are good, but sometimes – selfish,” professor Vytautas Landsbergis says. In his opinion, the entrenchment of local parties, which create mini-states, is dangerous. 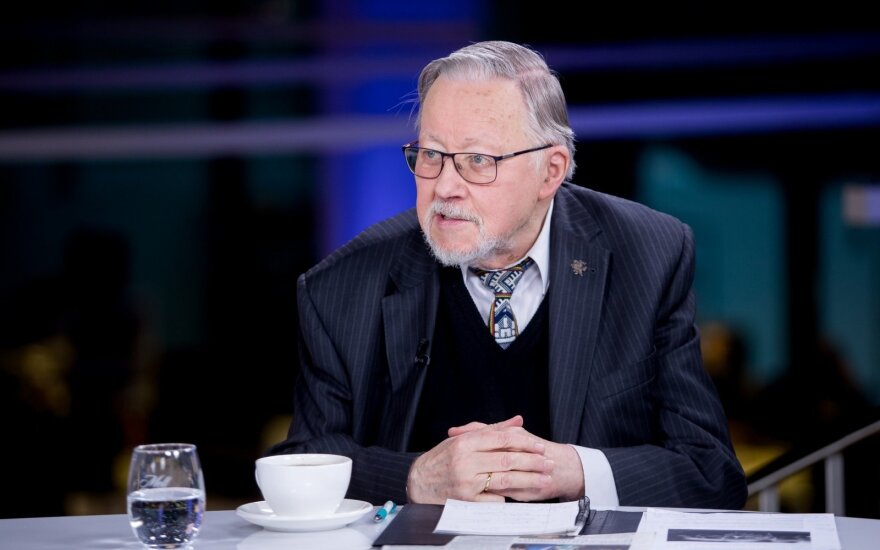 The phenomenon of civic electoral committees and political situation after the elections was the topic of discussion in Delfi's Dėmesio Centre featuring V. Landsbergis.

A point that the professor emphasises to start with is that it is not yet time to say "after the elections." He explains that the councils may have been elected, but coalition building and deal making await, with behind the scenes dealings that no longer involve the voters.

In regard to Visvaldas Matijošaitis' electoral committee's overwhelming victory in Kaunas city (taking 33 seats of 41), V. Landsbergis stated, "I hope that Kaunas will not declare independence from Lithuania. But such a trend exists looking more broadly at what is happening in Lithuania. The entrenchment of certain groups, which could call themselves parties, committees, parishes or such. They obtain the people's trust and entrench themselves in government in certain areas. Municipal governance is specifically local governance, but it is part of the large state formation. Now even commentators use the concept of "national parties." They don't yet say parish parties, but... In reality, all those committees are small local parties making political deals, sharing power and opportunities, sometimes they are good, but sometimes – selfish.

We have some very poor Soviet traditions. For example, employing one's own or useful people under the condition that they join the party. This is the Soviet system – join the Communist Party, then you can make an appearance. Otherwise just sit in the corner. Unfortunately, we still operate like this. Certain influential politicians calmly tell good people, specialists: come to my party and you will get a good job. It should be shameful to act like this, but it seems they don't feel it."

V. Landsbergis adds that in regard to Kaunas, there are two reasons for Matijošaitis' political power was successful. Firstly, he explains, the candidate was able to perform real tasks that appeal to people and emphasise that no work was done before him. This, Landsbergis remarks, is typical across all governments, trying to show that everything was bad before. Secondly, he points out that people really do see work done that was not performed by prior authorities, which V. Landsbergis describes as prior political parties' negligence.

Regarding the mayoral elections in Vilnius, the veteran politician noted that the Conservative party's candidate was perhaps poorly chosen or otherwise, poorly advertised. In respect to controversial politician Viktor Uspaskich reaching third place in the mayoral race, V. Landsbergis finds the matter concerning because, as he points out, a large portion of residents did not go to vote, which was a thought that he believes was cultivated by certain political powers for 2-3 decades.

During these municipal elections, the Conservative party has typically fared better than its mayoral candidates. V. Landsbergis explains this by pointing out that the party retains its renown and may have more weight than individual candidates. At the same time, he adds that there may have been a lack of convincing candidates as well as preparatory work by both party and candidate. "I do not see any big problem here, but I believe that the party had too few impressive soloists. The overall music is good, but the applause for the soloist was not as great. It is necessary to nurture soloists," V. Landsbergis said.

"I am more interested in where our democracy is going. The task for national parties is national problems. But if parish, local parties are playing first violin everywhere, all political, idea life is reduced to local problems and how to enter power through those local problems. It is a bad classic that a party's goal is to enter power no matter the cost. I believe it is a mistaken stance, even if it is sometimes nurtured," the professor said.

When asked if perhaps it is better for local groups to enter municipalities, so that they could better work for the benefit of the local community and would not hold national level ambitions, the politician remarked that such situations are simply not the case, with everyone having their own ideas how to arrange matters and it is not always clear for whose benefit they work. Meanwhile, he finds that party responsibility should be larger and would that they have to look at the bigger picture outside the local context.

The professor compares the rise of electoral committees to how in the Polish-Lithuanian Commonwealth, the massive state dissolved under the bickering of various lords seeking to obtain a bigger piece or how the Roman Empire devolved into corruption. "Such matters persisted for a time and even left us with some beautiful ruins," he quipped.