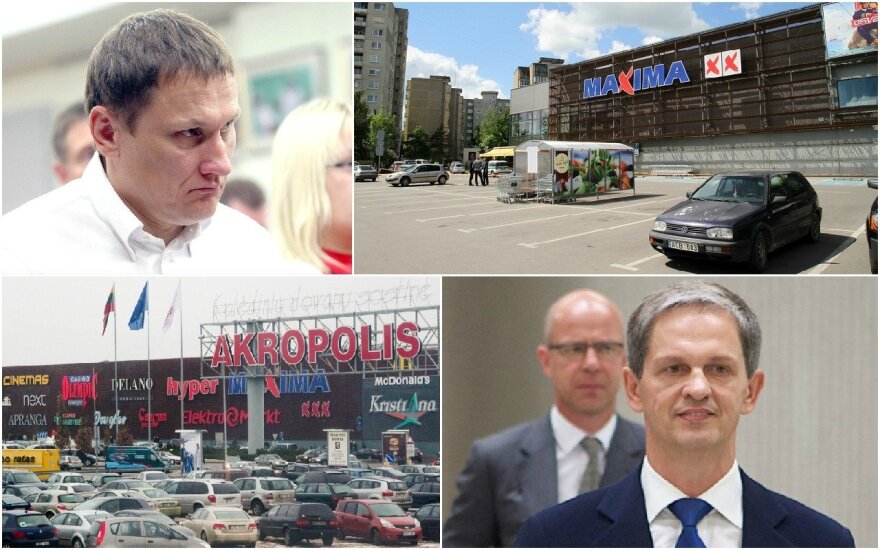 The founders of Lithuania's largest business group are clashing – did the Vilnius Akropolis office building contain a special room or not? A safe which held the businessmen's gold and large sums of cash.

Minor stockholder Mindaugas Marcinkevičius states that at least earlier there was an elevator sized secret room – a safe where the VP Group shareholders kept gold and millions in cash "for a rainy day".

Representatives to the chief stockholder Nerijus Numavičius assure that such a safe does not exist in Akropolis and talks of joint gold and cash reserves are without basis – law enforcement officers did not even check such testimony because the preliminary investigation was cancelled.

The Financial Crime Investigation Service (FNTT) has so far neither confirmed, nor denied information on the testimony given to it that Julius Numavičius' brother Nerijus did not return more than 3 million euro in gold and cash belonging to the former. It is also unclear whether such testimony was investigated in any way.

How much money could fit in such a safe?

Delfi inquired M. Marcinkevičius about the secret room-safe described during the testimony of N. Numavičius' brother Julius. The following are responses forwarded by his representatives:

- Was there really a secret safe with gold and cash in Akropolis, to which only one person had access?

- Does such a room with a safe still exist?

It certainly did six years ago.

- If it did or does, what is the most gold or cash that could be held in it?

The safe is the size of a sizeable elevator.

- What was or is it (the cash and gold) intended for?

This question should be addressed to the person with access to the safe.

- Is it true that N. Numavičius did not hand over the minor stockholders their cut of the safe mentioned in the testimony?

From J. Numavičius' testimony it is clear that J. Numavičius (he is Nerijus' brother) also knows that such companies as Akso were created to allow N. Numavičius to withdraw money from the business and would not need to share with the others [it is disputed in the courts to what extent such public statements match reality, however for now there are no final decisions and it is unclear who is correct].

- Were you handed a part of the wealth?

In my opinion both the money and the gold in the safe was never adequately distributed to me and our other partners, just as the remaining wealth of the group.

Admits to the existence of other safes

"The Akropolis does not and never had a secret safe – the business owners of the time had their own safes. Every stockholder decided on their own what wealth and documents to safeguard and what to do with the property.

We view these baseless accusations as yet another episode of systemic pressure from several individuals that has gone on for two years against Nerijus Numavičius. This pressure is intended for one goal – to obtain a "peace tax" at any cost, even by spreading slander and harming reputations," she said in a comment sent to Delfi.

According to Bivainytė, a vast arsenal of means is employed to spread the accusations – courts, the prosecutor's office, tax oversight and tax investigation institutions, the news media. Supposedly all norms of ethics are overstepped, facts are distorted or even blatant lies are stated.

"All these accusations about some sort of supposedly withheld sums fall flat, this has been publically stated a number of times and the prosecutor's office has halted the preliminary investigation because the facts were not confirmed," she stated.

Delfi attempted to contact J. Numavičius for comments by email and phone, but neither was successful.

After Delfi inquired N. Numavičius' representatives about the potential existence of the room-safe which is mentioned in the testimony to the FNTT, his lawyers presented the court with a request to hold the evidence as private information.

Furthermore the businessman released a slew of suspicions that supposedly the group used an "especially aggressive" tax planning system and the use of company legal instruments, apparently "created the premises for tax evasion". The suspicions have not been proven and a number of court cases are ongoing regarding them.

Who are the richest people in Lithuania?

Lithuanian Law-enforcement officers have conducted searches at the office and home of Diana Dominiene...