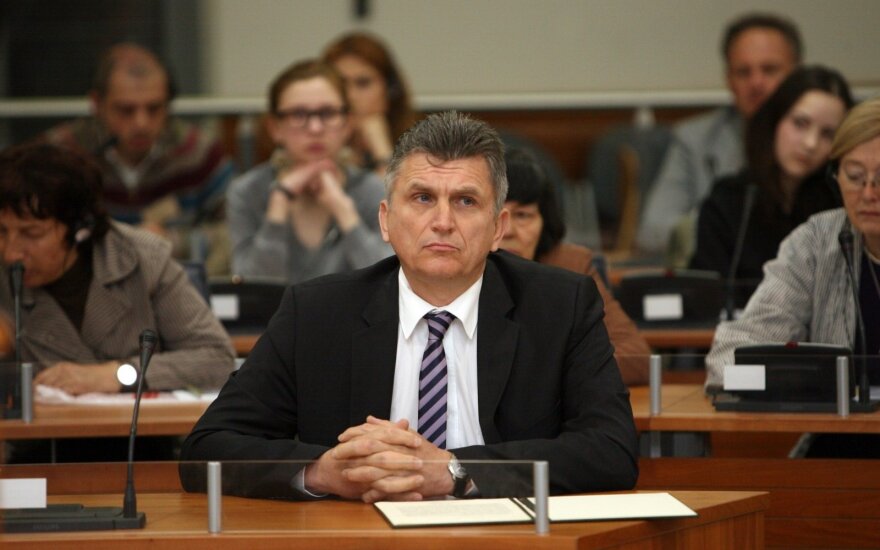 There wouldn't even have been a discussion over the LRT's finances if the LRT had voluntarily handed over all the numbers requested by the Lithuanian parliament and would this way have forestalled the question's deliberations.

However the LRT did not choose this liberating opportunity, instead choosing to act evasive under the cover of confidentiality agreements and a supposed pressure on the freedom of the press which, you could say it called upon itself.

How did it happen that the LRT is signing agreements with confidentiality clauses in the first place? If it was negotiated by producers, why is the LRT standing down when it has a far greater budget than commercial broadcasters and respectively – far more power in negotiations.

An even less serious excuse is the refusal to provide data because the main LRT finance investigation backer Ramūnas Karbauskis is a participant in the television market because once upon a time the LRT, as well as the commercial broadcasters, was competing for the right to broadcast Naisių Vasara which could be seen as a successful political advert for Karbauskis. Irony of fate: without being forced by anyone the LRT significantly contributed to the creation of Karbauskis' political power and paid for it with tax payer funds.

Respectively it is difficult to grasp what we are seeing on television: journalist Edmundas Jakilaitis, tearing politicians to bits with no self-interest, producer Jakilaitis, whose head is filled with thoughts of show costs, hunting for commissions, participating in competitions, annual financial growth plans and marketing of own services, or Jakilaitis the spouse, whose wife works for an important minister.

Then one is tempted to ask why are Jakilaitis' talks with Saulius Skvernelis recently reminiscent of the old talk show Kas geresnio, premjere? [What's up, prime minister?], when policy analysis is somewhat overbalanced by efforts to extract the prime minister's discontent with Karbauskis' aims to usurp the national broadcaster?

And it is completely incomprehensible how Jakilaitis' independence can be impacted by publication of the show's production finances and why the numbers were only provided after such a delay (only for one show by the way).

Instead of detailed numbers we get a year's old questions to Karbauskis and the complaints of one of the top ten most influential in Lithuania about a supposed danger to the freedom of speech. It would be the same if the fox Reinikis would cry in the hen house that his legal work to slaughter all the chickens is threatened by their squawking.

Does the avoidance of openness increase confidence in the LRT and the news media overall? Quite the contrary and it is going on in a country which has an entrenched problem of distrust in the media. For many years now trust in the news media is significantly lower in Lithuania than in Estonia and the Scandinavian countries, Lithuania is even surpassed a little in this regard by Latvia.

Among other things, this impacts the media as a business. Estonia which is more than two times smaller has an advertising market of the same size as Lithuania. Among the main causes of public distrust in the news media is the unsatisfactory separation of editorial content from owners' influence, the systemic suppression of media criticism and self-criticism, as well as regulation and self-regulation oriented at the owners' demands (For more on this read: Deficit of Trust and the Decline of Printed Media in Lithuania).

It must be stressed that all the problems touch upon exclusively media controlled by Lithuanians. Foreigner, primarily Scandinavian and Estonian – controlled Lithuanian media has directly imported journalist ethics and separation of editorial content from business and it is likely a strategically more important import than Norwegian gas.

Scandinavian imports represent a Western understanding of news media that the most stable basis of profitable news media is service to the people, with earnestness proven by demonstrative separation of owners from the editorial, demonstrative adherence to journalist ethics and news media self-regulation, which primarily occurs through merciless criticism of journalists and owners by journalists if anyone breaches the rules which build trust.

What does LRT look like in this respect – Lithuanian or Norwegian? If the questions raised about Karbauskis' links to Russia only received LRT attention now, how can you trust that it is an earnest concern with revealing an important truth to the public and not a suppression of criticism? How does carpet bombing of Karbauskis differ from what is written every day in the country's largest newspaper about prosecutors and the STT since the publication's owner and editor were charged with graft and sale of influence?

Under what miracle does producer Haroldas Mackevičius who is working with the LRT for the first season, for the first time in his life enter direct political polemics against Karbauskis? Why was it necessary if Dviračio Žynios' Karbauskis' character has far more convincing capacity to reveal the truth? What motivated this: the truth or a desire to express a public mea culpa regarding another very realistic character – the Panel Director [Skydinės Direktorius] – who amused audiences many seasons ago when the show was broadcast on LNK?

In the West one of the typical ways of raising confidence in the news media is a directed state policy to support public news media as a standard of quality, professionalism and ethics, which makes commercial broadcasters improve their standards. This is how one of the key points of the British public broadcaster BBC's mission points is understood; a similar mission is performed by French, German and its separate lands' public broadcasters.

In Lithuania, a country of relatively low confidence in the news media, even a theoretical consideration of the public broadcaster as a standard of media quality cannot be made. And practically the LRT management, as well as its de facto subordinate LRT council is leading further away from the quality standard ideal and closer to the Lithuanian interest news media practice.

The council's subordinacy is best proven by its head Žygintas Pečiulis' recently released bureaucratic and fictional texts. While there is no lack of calls for the freedom of the press, at their core the texts unambiguously defend the interests of the LRT's producers.

This means that the professor is defending not the journalists, but the owners because the producers, as owners, rule the business of TV content creation. In other words the LRT council chairman and Lithuanian Journalist Union chairman Dainius Radzevičius' declared sacred anger at politicians' aims to suppress the news media is simply rhetorical camouflage concealing that once again it is not the journalists and their independent work that is being defended, but the untouchability of the news media as a business.

The LRT management likely is celebrating that it is specifically Karbauskis who is attacking – a Lithuanian political figure who is justifiable repelling. Other LRT critics – tabloid classics Kristupas Krivickas, Saulius Bartkus and such are also not acceptable to everyone. They test the solidity of the LRT defence likely under selfish reasons and not out of concern over the quality of the LRT. However competing producers know the television market and present inconvenient questions which greatly displease the LRT management and its sanctified producers.

As in politics, so in media – often facts come to light not from the love of truth, but when interests clash and often not appealing on either side. Let us recall how many interesting things we found out when Artūras Zuokas and Viktor Uspaskich began setting journalists on one another.

Politicians turning their noses away from Karbauskis could easily fix the situation by taking initiative to demand all the answers about the LRT, as well as the fertiliser which Naisiai survives on.

But perhaps it is hard to resist the television camera which they say works on politicians as if the snake charmer's stick on a cobra. But resist they should because the question of LRT openness undercuts confidence in Lithuanian news media in general. It is important in a country where within a year two cases were taking to court regarding the two most powerful media group's owners and heads being suspected of political corruption and sale of influence.

The Lithuanian National Audit Office (NAO) expects to decide by mid-January whether or not to...