Virginijus Savukynas. Whose capital is Jerusalem? 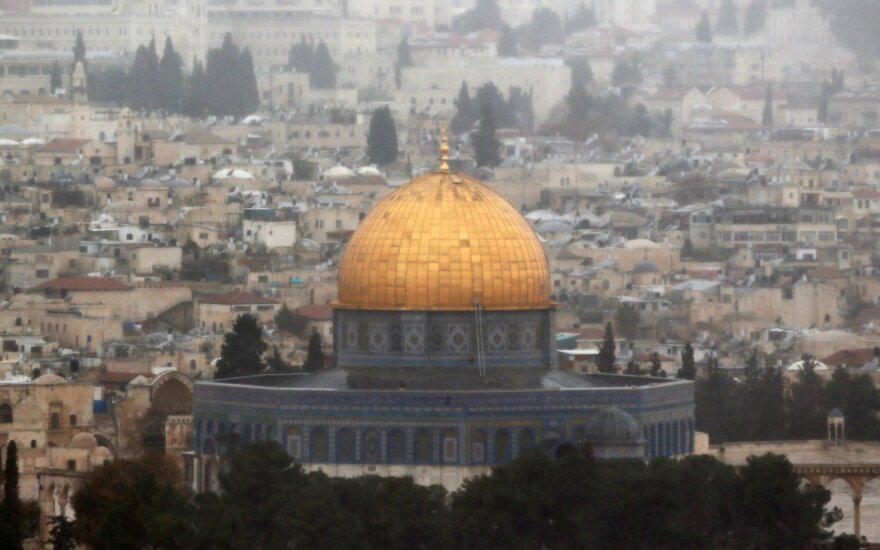 When speaking international politics, most will say that in it what matters most is pure naked interests.

It is true, however we should not disregard values either. After all we know who the aggressor is and who the victim is. Who is attacking and who is defending. Elementary decency demands that we stand on the side of those who are defending themselves and trying to defend their right to exist.

Here in Lithuania no-one questions what exactly is going on in Ukraine and many Lithuanians earnestly support the Ukrainians, while they respond with genuine respect for our country.

But how do we act in other cases? What of Israel? Take Donald Trump deciding to move the United States embassy to Jerusalem. A vote in the United Nations was held which condemned such a move. Lithuania supported the condemnation. Why?

Minister of Foreign Affairs Linas Linkevičius explained that this was a display of consistency and unwillingness to make the situation more acute. The question arises: what consistency? Consistency to not resolve the Middle East Conflict? It is clear that such consistency is not needed.

Many commentators, political scientists and politicians in Lithuania united as never before to condemn such a regretful mistake by Lithuania.

There was much talk of how we did not support the United States which is our ally and one of the most important guarantors of security. That's the pragmatic side of the matter. However there is also the moral aspect.

The history of the modern Israeli state is difficult and complicated. It is a state which is not recognised by some Arab states. They clearly and officially state that Israel should be destroyed. Just imagine our neighbours openly saying that we should be wiped off the face of the earth. How should we feel then?

How much did Israel have to war in the 20th century for its right to exist? The territory of Israel is fired upon to this day and until a wall was built, suicide attacks had become near daily occurrences. Israel is literally fighting for its survival.

They are fighting for their right to exist. And in this case Israel is not the aggressor – after all it is not aiming to occupy any country. It simply wishes to ensure its citizens' security. Can we blame it for that? Certainly not. Quite the contrary, we of all countries should realise what it matters to fight for our state. The whole 20th century was a struggle for our state.

Yes, just as we support the Ukrainians, so we should support Israel.

It is obvious that problems exist for Palestinians. The circumstances for many of them are dreadful – they live in poverty, their children have no futures.

However it would not be fair to accuse Israel for this. Everyone understands that great geopolitical interests clash here. And Israel alone cannot resolve this problem.

The Israeli-Palestinian conflict is frozen and not being resolved in any way. The Israeli interest is to normalise the situation. Given hope and a dignified life the Palestinians would certainly support terrorism less.

If we admit that the Jews have the right to their own state, then we should clearly admit that Jerusalem is the capital of Israel.

And Jerusalem is more than just the capital for Jews. It is their spiritual sacred space. For those at least slightly aware of history and religious studies, it is completely clear.

Yes, Jerusalem is important to Muslims and Christians, however it being recognised the capital of Israel does not, after all mean that others will be unable to visit. This questions should be well understandable to us, we had lost Vilnius as well.

Thus in the international arena as well we sometimes need a little empathy. We must think not only pragmatically, but also morally.

After all when we fought for our freedom, the support of the world mattered to us greatly. When on March 11, 1990 we declared independence, the support of tiny Iceland was very important to us. Why should we forget this in the case of Israel?

Vytautas Radžvilas. As always the Lithuanian position is to not have a position

Valentinas Mazuronis. The great mistake of the Foreign Ministry and President Grybauskaitė?