Eligijus Raila | ldkistorija.lt
aA
Vilnius Cathedral is a Lithuanian Catholic shrine known for its architectural style, which distinguishes it from other sacral buildings of a similar purpose. It is rare that a city should boast of a cathedral built in the Classical style. 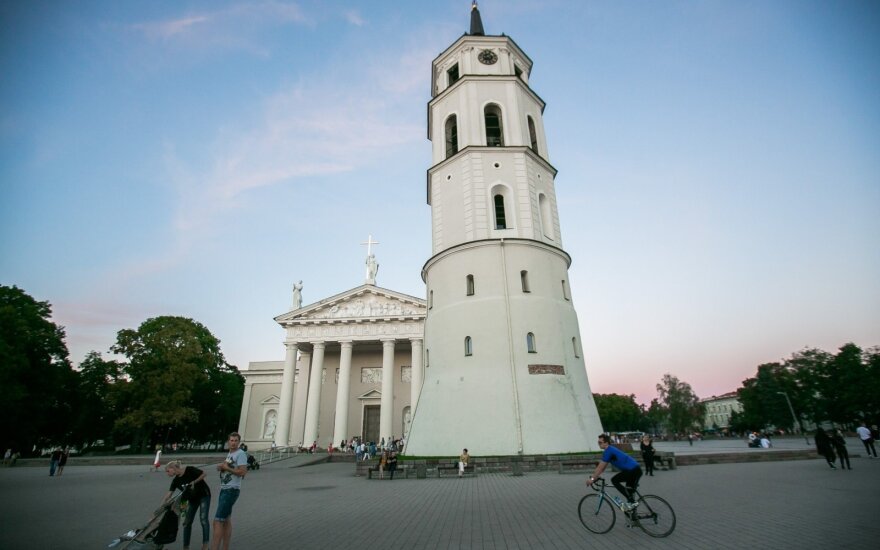 Its reconstruction is related to an ill-fated event. On September 2, 1769, a storm raging in Vilnius destroyed a corner tower of the Cathedral, which in turn broke through the vaults of the adjoining Blessed Mary's Chapel. The falling vaults killed six priests. The Cathedral was closed down after this unfortunate turn of events. It was Ignatius Jacob Masalski, Bishop of Vilnius, who made the decision to start reconstruction work of the Cathedral. The Bishop commissioned the court architect Martin Knakfuss to undertake the work. In 1771, Knakfuss conducted a thorough investigation of the Cathedral brickwork and made a list of damages incurred as a result of the collapse. In April of 1778, the Cathedral was finally closed, and all religious services were transferred to St. John's church.

Related articles
The first bishops of medieval Lithuania
The last medieval dukedom: the coronation of Mindaugas

The first restoration project of the Cathedral was designed by the Italian Giuseppe Sacco, who arrived from Grodno. However, his project was doomed to fail, and the work of restoring the Cathedral was taken over by the architect Laurynas Gucevičius (Pol.Wawrzyniec Gucewicz), who enjoyed Bishop Ignacy Jakub Masalski's patronage. In the period of 1779–1780, having received financial support from the Bishop, Laurynas Gucevičius travelled round France and Italy. During the trip, he maintained contact with the French architects Claude Nicolu Ledoux and Jacques-Germain Soufflot and developed his skills and competences in architecture. More importantly, during the years spent abroad he was reflecting on, nurturing and bringing to fruition his own version of the Vilnius Cathedral restoration project, which gained Bishop Ignacy Jakub Masalskis' approval.

The final project of remodelling the Cathedral was developed by Laurynas Gucevičius in 1781. The following year, speedy preparatory work for the reconstruction was launched. In the meantime, the architect himself was posted to Sweden and the German cities of Hamburg and Lübeck to procure copper sheet. The purchased goods were shipped by sea from Lübeck to Liepaja, and from Liepaja brought to Jurbarkas by horses, reaching Vilnius as a destination point by waterway. The same year, preparatory construction work was scheduled, including a clean-up of the Cathedral environment and preparation of a work site, suitable for a 'factory'. Furthermore, significant work had to be undertaken in demounting certain parts of the old building. For example, the remains of the collapsed tower had to be removed, the masonry, found in the state of emergency, dismantled and the roof of the old Cathedral had to be taken off.

Laurynas Gucevičius designed Vilnius Cathedral as a shrine, the significance and solemnity of which had to be highlighted by plenty of sculptures. Just like the Vilnius Bishop's residence, the Cathedral was to become the most important church in Lithuania. The idea to decorate the Cathedral with statues was also approved by Bishop Masalskis. To realize the ambitious project, the sculptor Tommaso Righi (1727–1802) was invited from Rome. The statues erected by him in Vilnius Cathedral are regarded as the last manifestations of Baroque art. Three more huge sculptures – those of St. Helena with a cross, St. Casimir and St. Stanislaus – were erected above the Cathedral portico. They were built by Karolis Jelskis with Gucevičius' blessing.

According to a prominent researcher of Vilnius Cathedral, the art historian Vladas Drėma (1910–1995), 'The Cathedral designed by Lithuania's most eminent architect Laurynas Gucevičius is the best piece of work, the most beautiful and perfect blossom of Classicism, a unique and unrepeatable masterpiece of world architecture'.