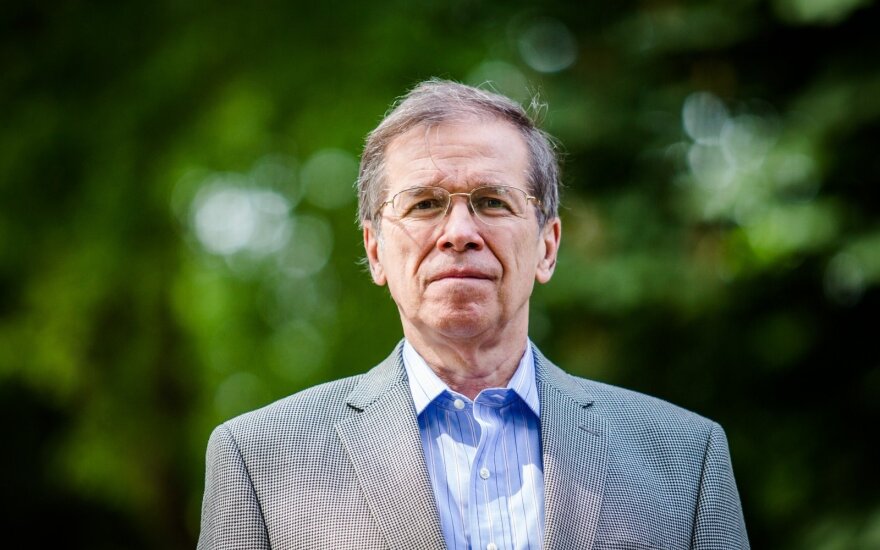 Around a decade ago Mindaugas Murza and his small group of Nazi sympathisers would often arrange protests or counter-protests that received much attention from the news media even though Murza had little serious role in state life. When the media came to its senses and ceased writing about this opportunist, he and his little band vanished from public life.

Rūta Vanagaitė is worthy of a similar fate. Her tales of Adolfas Ramanauskas-Vanagas should have been met with silence.

The accusation was unconvincing from the very start. A person does not torture and inure himself as Ramanauskas was tortured. It is also unconvincing that the Soviets wouldn't have known this and wouldn't have used it to "unmask" Ramanauskas or that Lithuanian historians would not have discovered it and commented. It is also no secret that Vanagaitė is pretending at righteousness and is savouring the media and public's attention and her current partner views almost any Lithuanian a descendant of a Jew killer or one themselves.

Related articles
Shocking statements by R. Vanagaitė outside Lithuania
Where Vanagaitė and Paluckas are similar

The silence that reigns now would have been the best outcome. Staying silent and letting historians speak up would have been best, for they are suitably familiar with Ramanauskas' file. But it is not realistic to expect self-control in this age of social media and selfies, especially when Vanagaitė, unlike Murza, is an author and has fans.

The ferocious response was very detrimental to Lithuania because it granted material for Moscow to once more portray Lithuanians as fascists who actively participated in the Holocaust, killed Soviet citizens in the post-war years, continue to falsify history, fail to look at the past more openly, do not respect freedom of speech and try to silence people who speak or write otherwise.

The overly combative reaction will harm Lithuania's image in the West as well while this image is already not the best. Some spheres still hold negative preconceptions of Lithuania and Eastern Europe in general. It is as if a foreign continent, thrumming with atavistic passions, which the Soviet or Yugoslavian governments still managed to rein in, but with their downfall, ethnic conflicts and settling of accounts erupted.

The publishing house Alma Littera's decision to remove and likely destroy all of Vanagaitė's books was also not beneficial.

In the West, book removal is instinctively associated with book burning. The Nazis were notable for it, similar Lithuanian actions seemingly justify comparisons between Lithuanians and Nazis, if not equalising. Laimantas Jonušas was reminded of the Soviet era by the decision to remove the books, when politically unsuitable or unflavoured authors had their books removed, even those which were politically innocent.

We can only be happy that in the Soviet era, the government would demand it, while now it does not have any such powers.

It is more concerning that the Chief Prosecutor's office is considering the request by the Lithuanian Freedom Fights Movement to sue Vanagaitė for the disgracing and slander of the memory of the dead. Based on the penal code, those who publically spread false claims about the dead, which can lead to people's scorn or harm the respect for their memory, can be prosecuted.

They can be punished by public works, a fine, restriction of freedom, arrest or incarceration. If a court case was initiated, abroad the prosecutor's actions would be portrayed as suppressing the individual simply for expressing unpopular thoughts and daring to doubt national "myths".

That Vanagaitė admitted to her mistake and relinquished her accusations will only strengthen such an image.

Moscow probably cannot even hope that Lithuanians would grant their propagandists so much excellent material to attack and scorn Lithuania.

Historians are speaking that someone (Moscow via proxies?) had to direct Vanagaitė to the juiciest pieces of Ramanauskas' file.

The "discovery" was not coincidental. The people's anger could have been predicted, but the decision by Alma Littera was an unexpected bonus. If the prosecutors launched the lawsuit, certain institutions would celebrate with champagne.

As I've mentioned, this incident has received attention in the West. The Lithuanian PEN centre received a letter from PEN America which inquired how or if at all there will be a reaction to the publisher's decision to remove her book Mūsiškiai from circulation.

The impression is formed that not only censorship exists, even if non-governmental, but also Lithuanians' unwillingness to speak more openly of more unpleasant moments of our history.

One of the most influential German newspapers Spiegel printed an article about Vanagaitė's case, granting her the final word. She cited words from the Master and Margarita that "manuscripts don't burn". I am fairly certain that the paper will not tell its readers that Vanagaitė admitted she was wrong and expressed regret for "rushed and arrogant public comments."

Historians such as Christoph Dieckmann will write that all nations' historians have to raise such questions they have no readily available answers for, but will suggest in subtext that Lithuanians struggle with this more than the Germans or other Westerners.

You cannot establish national discipline, nor can you create a unified tale of the painful pages of the past.

Such discipline isn't even needed because it would show a fear of something that we ourselves do not firmly believe in what we present as historical truth. When next time an article like this appears, anger and accusations will erupt again, suggestions to ban and punish, especially if Kremlin trolls fan the flames.

But I believe that other publishers will not follow Alma Littera's example, will not urge to destroy the books of controversial authors, which were just fine when they could be sold for a profit.

I believe that politicians will also weigh their words, will not savour the role of the just, but will consider whether their statements will not grant Kremlin propaganda material and that the prosecutors will understand that the freedom of speech is protected even when the person is speaking nonsense, even if they try to hurt others. I believe, but I also believe Santa Claus.

Public letter by R. Vanagaitė: I admit I was mistaken

Prime Minister Saulius Skvernelis says that Lithuania does not need to review its attitude toward...

The publishing group Alma Littera said on Friday that it was ending cooperation with Rūta...