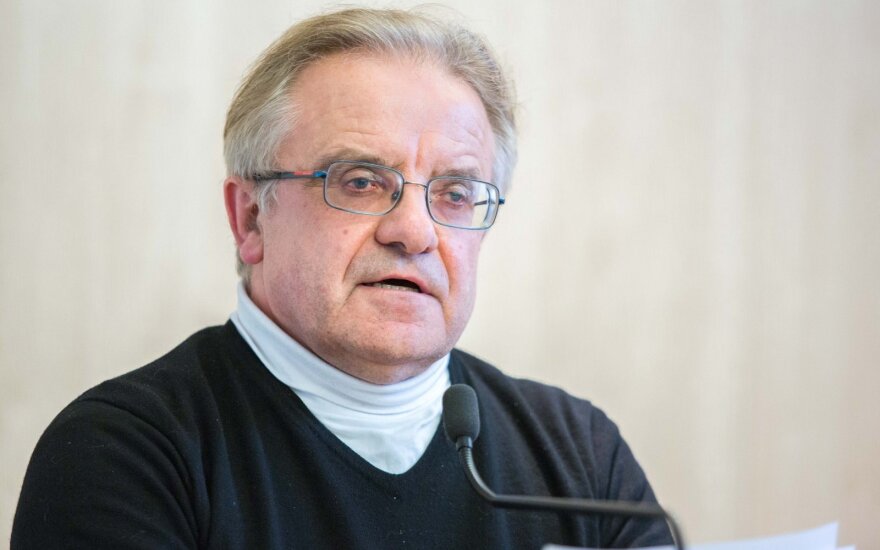 The wheel of time turns again and we must once again ask the question, which silently hid in the minds and souls of many Sąjūdis members or was perhaps carefully whispered during the Sąjūdis founding meeting – will there be a Lithuanian state? However, initially the same, this same question arises in a completely different geopolitical context, thus obtaining a completely different meaning, Vytautas Radžvilas writes on lrt.lt.

Thirty years ago, it was inspired by the bright hope of the ongoing perestroika and crumbling communist empire opening a window of opportunity for Lithuania – an opportunity that may never come again to escape the grasp of the USSR occupation and be freed from the prison of the "brotherly nations". This opportunity was used well enough. At the efforts of the Sąjūdis, Lithuania returned to the world political map and the international community of sovereign nations as an independent state.

Unfortunately, it is no longer 1988. Analogies with 1938 are arising for no reason, where having obediently accepted Poland's ultimatum and soon having handed over the Klaipėda region to Germany with no resistance, more observant people palpably felt the geopolitical storm gathering over Lithuania and worriedly mused – will the country survive? As we all know, these worries all came amply true – tragedy was not averted and the Lithuanian state vanished for half a century.

An opportunity to recreate it was briefly granted by an event of epochal significance – the world communist system crisis and its subsequent fracture. We now look at an equal epochal breaking point and inevitable geopolitical shocks and confusion period. The crisis and accelerating fracture of communism's counterpart – the world neoliberal system – has arrived. The first signs of crisis in the Cold War-winning and rushing to even declare the end of history Western neoliberal system started to emerge already at the beginning of the XXI century. The events of September 9, 2001 could be seen as a symbolic sign of its beginning. While initially it seemed only a disappointing misunderstanding, which did not raise doubt in the stability of the Western globalist democratisation project and neoliberal market revolution's victory in the whole world, it took only a dozen years for the Western neoliberal system to begin fraying at the edges and trust in its supremacy, as well as future prospects, to fade.

Brexit and the election of Donald Trump as US president are two events, which shook this system to its foundations. Declaring and intending to implement his political programme, D. Trump has actually revealed himself to be none other, but a follower of M. Gorbachev and his perestroika in the Soviet Union. His predecessor understood that the weakening Soviet empire is no longer able to be the world communist revolution's core and banner-bearer. Meanwhile, D. Trump understands with clarity that the USA no longer has the capacities to be the vanguard and driving force of globalist democratisation and permanent market revolution. D. Trump's America First and Make America Great Again political programme is an actual admission that the neoliberal system has run its course and America itself is stepping back as the leader of this system as well as from unilaterally supporting the geopolitical world order, being the main guarantor of international peace.

It is not coincidental that the reforms of both political and economic systems, as well as geopolitical and civilizational blocs – the communist and neoliberal – started in namely the USSR and USA, that is to say not only in the economic, but also ideological and political power centres of these ideologies. Equally, it is telling that both reformers – M. Gorbachev and D. Trump are representatives of the elite, they face the fierce opposition of their own elite members, who are content and fear any changes. What M. Gorbachev's fight against stagnators and his perestroika ended with is well known. What D. Trump's reformative aims will end with and what awaits himself, one can only guess at. Only one thing is clear – his fight with the stagnator swamp will be fierce, however regardless of win or lose, the unipolar American world will inevitably fade into history. This means that the global configuration of relations will change, new geopolitical and military power centres will appear and distribute themselves, new interstate relations will emerge and a different world security system will surface.

Another notable and not coincidental similarity is that both the USSR soviet bloc's leading countries and the USA democratic bloc's leading countries' elites viewed and view the intentions of the reforms with fear and suspicion, fiercely opposing any major changes. The vision of the world communist revolution and the global liberal democratic, as well as the neoliberal market revolution's utopia, despite differences in details, are actually two projects of radical world reform. The first was led by the globalist and transnational or international communist elite. The second – the equally globally thinking transnational or cosmopolitan elite. The only currently imagined alternative to these two elites' globalist "new world order" projects is a world of national states. The principles of its peaceful coexistence are of course not clear yet and will have to be found.

With the Gorbachev USSR relinquishing its globalist ambitions, national revival movements began across the Soviet bloc and within the soviet empire itself, seeking to either reclaim limited national sovereignty (in the USSR controlled satellite Eastern bloc countries) or to fully recreate independent national states (in the former USSR "allied republics"). The communist elites opposed the efforts of these nations vehemently.

This is now repeating in the Western world, primarily in the European Union – its leaders and globalist elites on one hand are fighting with, in the view, D. Trump's betrayal of liberal democracy and transatlantic unity and on the other hand are hopelessly seeking to halt the wave of national and state revival occurring in all countries. Looking from such a historical perspective, it is clear that the main conflict of the XX and early XXI century is not the relatively small left-right or other distinctions, but a conflict of globalism and nationalist political philosophies.

Looking through the prism of the fundamental distinction between globalism and nationalism, it becomes clear that the tensions fracturing the contemporary Western world are essentially no different from the disagreements and conflicts, which blew up the USSR-dominated communist bloc and the empire, which occupied Lithuania. The fall of the communist system was awaited with hope and sought to use it as an opportunity to recreate an independent country. The nearing fall of the neoliberal system poses far more questions and concern over the future of Lithuania.

The EU leaders, thinking in globalist and no longer reflecting world realities categories, particularly those in Germany and France, are opposing D. Trump's political programme and his new, supposedly "isolationist" US foreign policy direction. With tensions and disagreements growing between the EU and USA, transatlantic relations are suffering even in regard to defence. With the EU hegemons of France and Germany distancing from the USA, there is an ever more open and determined turn to Russia, which bodes poorly for Lithuania.

The great geopolitical shifts and shocks usually end with redraws of the world political map. A French, German and Russian alliance is ever more likely, but is only possible at the cost of smaller and weaker states. This would mean that a new shadow, now of a Merkel-Putin Pact, hangs over Lithuania. Such a conspiracy would see Lithuania returned to the Russian sphere of influence; not necessarily through open annexation or formal incorporation. The partners of the looming conspiracy may seek to "save face" by redistributing spheres of influence and "soft occupation" alike the Cold War era "Finlandization" model.

Many signs show that this is being prepared for. Especially worrying is the image being imposed on the Lithuanian public that somewhere out there hides a "democratic" and thus "not dangerous" Russia, which will inevitably emerge with the end of Vladimir Putin's regime. These illusions, popular and fashionable in the West, are being disseminated ever more openly. However, seeking the growing geopolitical and security threats, we should not forget that three decades ago, we regained freedom and recreated an independent Lithuanian state only because we did not trust M. Gorbachev's manufactured and fervently supported in the West vision of "united Europe, from Lisbon to Vladivostok". The West sought to dissuade us from our efforts to reform our state, claiming that we will be better off living in the future liberal empire being created by their beloved M. Gorbachev.

We did not believe and operated based on our own mind and will. This will be needed again soon. And it appears that today it will be even more necessary if we want the only thirty year old Lithuanian state to withstand the nearing geopolitical storm, so that it does not remain in our children's memories as a beautiful, but brief dream.

Kęstutis Girnius. All the presidential candidates cause concern

The final riddle in the presidential candidate ratings