V. Pranckietis – people understand everything correctly, we have to speak the truth 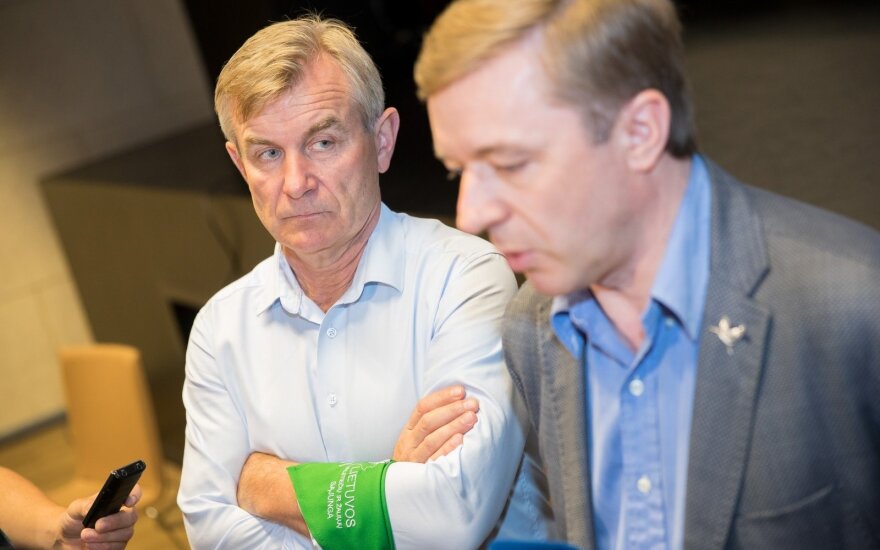 Even summer has not brought the Farmer and Greens respite. The party chairman was once more caught with Greta Kildišienė. This time even his companions have been expressing discontent. The word "lies" appeared in their rhetoric.

Ramūnas Karbauskis is rapidly losing or perhaps has even lost the title of honest politician and with it – trust as well. This is displayed by constantly declining ratings. This sort of behaviour is particularly harmful to the entire Farmer and Greens Union, thus there have been internal discussions how to improve the situation. One of the proposals to release a large print volume newspaper will unlikely solve the issue, if there is no understanding that this is not a news media problem – the state is not a palace where servants do not oppose the master's behaviour and words because they depend on him.

The bottom is now close. This is displayed by the latest Vilmorus survey. Viktoras Pranckietis is negatively viewed by a little more than 15.5%, Saulius Skvernelis – 26.5%, while R. Karbauskis by more than 52% of voters. The only one to gather even more negative votes was now former Labour Party chairwoman Živilė Pinskuvienė.

Having entered power with a large credit of trust, the Farmer and Greens' ratings have been barrelling downhill for the past few months. Surveys show that they aren't even first in the ratings lists anymore, with the Homeland Union – Lithuanian Christian Democrats having surpassed them. Political scientists say that this often happens when parties from the political side-lines win elections. Their ratings spike up, but failing to satisfy voters' expectations, they fall just as quickly. And it is not just unpopular decisions that cause this, despite most politicians claiming otherwise. Political scientist Vytautas Dumbliauskas states that as soon as the "Farmers" entered Seimas, they began making noise with peculiar decisions such as starting with the artificial insemination law. Distrust was also raised by the party's Seimas group composition.

"They are only gathered for this one off event. The cabinet is no-one's, it is non-partisan. The people gathered have nothing to do with politics or the party. R. Karbauskis' experiment – handing over the post that should have belonged to him as the leader of the winning party – he handed to someone from the side, not a party member and you get this sort of split rule. What is the point of two heads, it immediately produces conflict," M. Romeris University docent dr. Vytautas Dumbliauskas explains.

Farmer and Greens Union group member Povilas Urbšys admits that their group and cabinet is not doing what the people elected them to Seimas for.

"We are losing our political identity which we presented during the electoral campaign. We presented ourselves as social sensitive and specifically supportive of traditional values," P. Urbšys says.

Political scientist Tomas Janeliūnas states that honesty is very important in politics. People lose confidence in politicians who avoid straightforwardly answering, act evasive and ambiguous. This was demonstrated by the Farmer Greens leader R. Karbauskis himself during yet another situation regarding G. Kildišienė.

"Such a politician has lost the title of honest politician. This is the worst thing possible for any politician. In this regard R. Karbauskis lost the image and efforts to evade, explain through some weird scenarios, what happened or did not, this does not add to trust, not for him, nor for the entire party," the VU Institute of International Relations and Political Science professor dr. T. Janeliūnas said.

When a politician is avoiding answering, people make their own conclusions.

"I believe he is caught and caught badly. He definitely lied, definitely made up stories regarding that car, its purchase and etc. And now with the book it is once again a hard to explain move. A construction continues being created on a dirt basis and everyone understands that this Greta is definitely not uninvolved. If you want a private life, don't enter politics," V. Dumbliauskas summarises.

Seimas Speaker Viktoras Pranckietis does not deny that the party's declining ratings have been impacted by R. Karbauskis and G. Kildišienė's matters, frequently accompanied by the word "lies" in the public sphere.

"Here you mentioned the key word. I would like for it not to exist in the agendas, but we have to speak of it after all. Let me say it simply, people see everything and understand correctly and we should not hide it, but speak the truth," V. Pranckietis says.

The Seimas Speaker hopes that the story will come to an end and admits that after meeting with the Farmer and Greens group in his office, he demanded clear explanations from R. Karbauskis.

"I posed two essential questions – whether she is withdrawing from the party and whether we creating a political future for her. Since I got such answers, I responded after leaving that yes, she is leaving the party and I am glad that she did as she said," the Speaker admits.

It would appear that V. Pranckietis is now forced to demand explanations from R. Karbauskis because based on the most recent surveys, his ratings are now almost twice as high as the party chairman's. Based on the Seimas Statute, the Seimas Speaker must represent all Seimas group equally, not just the party he entered Seimas with. Political scientist T. Janeliūnas states that R. Karbauskis is no longer a moral authority for his party, thus the role of peacemaker is left to V. Pranckietis.

"There is a part of the group that does not trust R. Karbauskis much, while V. Pranckietis' reputation is fairly significant. It is an attempt to salvage the situation," T. Janeliūnas muses.

During the party congress in Naisiai, the Farmer Greens had a moment of enlightenment – the declining party image can be salvaged by releasing a newspaper with a print of 300 thousand copies once or twice per year.

"This is amazing, I do not know a publication in modern Lithuania that would have such a large print. And who could distribute it. People will perhaps light their fireplaces with it in the countryside, but for those who do not have that... I believe that such things won't help. Could you imagine Donald Trump, who is now also complaining about being attacked by the media and that he would announce that he is establishing a free newspaper where he will explain his programmes, his ideas and achievements, things like that. It sounds weird and so does the "Farmer" newspaper. In my opinion functions are distributed as such in modern society: news media analyses and informs us of what the politicians are doing, while the politicians have to come to terms with the news media because otherwise there's no being in politics," V. Dumbliauskas says.

Even party members doubt whether large newspaper print volumes and expensive communications solutions will save the Farmer and Greens Union. There are far cheaper solutions such as just apologising.

"I would like to personally apologise to the people of Lithuania for us involving the question of G. Kildišienė into the political agenda. I believe that we will return to our senses and conclusions will be made, priorities settled toward the state and the people," P. Urbšys hopes.

Financial obligations of Lithuania's political parties that ran for the 2016 general elections have...

The ruling Lithuanian Farmers and Greens Union (LFGU) pledges to kick off the next political season...

How “green” are the Farmer Greens’ decisions?